Breedon on the Hill

From Infogalactic: the planetary knowledge core
(Redirected from Frithuric)
Jump to: navigation, search

Breedon on the Hill is a village and civil parish about 5 miles (8 km) north of Ashby-de-la-Zouch in North West Leicestershire, England. The parish adjoins the Derbyshire county boundary and the village is only about 2 miles (3 km) south of the Derbyshire town of Melbourne. The 2001 Census recorded a parish population of 958 people in 404 households.[2] The parish includes the hamlets of Tonge 1 mile (1.6 km) east of the village and Wilson 1.3 miles (2 km) north of the village on the county boundary. 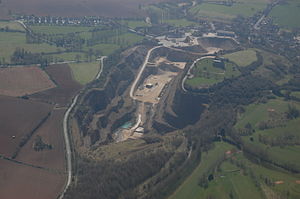 Breedon is notable for its Carboniferous limestone hill that rises 122 metres (400 ft) above sea level in a generally low-lying landscape and affords distant views across several counties. A large portion of the hill has been cut away by an active quarry now operated by Breedon Aggregates.

On top of the hill is The Bulwarks Iron Age hill fort, within which is Breedon's historic Church of England parish church.

Excavation of The Bulwarks in 1946 identified occupation between about the 1st century BC and about 1st century AD.[3]

The toponym is derived from the Celtic word bre for hill and the Old English word dun for hill.[4] Hence in its current form the name combines three forms of the word hill. Briudun, an early spelling, has been traced from AD 731.

Medieval Hagiography Manuscripts record four saints buried in Breedon-on-the-Hill. They are Friduricus,[5] donor of the Mercian Royal Monastery built in Breedon during the seventh century, King Eardwulf of Northumbria, and relatively unknown Anglo-Saxon Saints Beonna of Breedon and Cotta of Breedon.[6][7]

Breedon has a circular stone-built village lock-up.[3] It is 18th-century[citation needed] and similar to the one in the nearby Worthington. It was used for detaining local drunks or lost cattle.

In 1874, a branch of the Midland Railway was built through the eastern part of the parish and Tonge and Breedon railway station was built at Tonge. In 1980 British Railways closed the line and thereafter the track was dismantled. The trackbed through the parish is now part of National Cycle Route 6.

The Priory Church of St Mary and St Hardulph was originally a monastery founded in about AD 676 on the site of The Bulwarks, an Iron Age hill fort. It was re-founded as an Augustinian priory early in the 12th century.[8] Before becoming a monastery it was a hermitage.[9]

What remains of the priory church includes a large number of Anglo-Saxon sculptures,[10] an ornate family box pew and notable Renaissance church monuments.[11]

Breedon has two public houses: the Holly Bush and the Three Horseshoes. There was a third pub, The Lime Kiln, but this is now a private home.

The village has a small primary school, a post office and a butcher's shop.