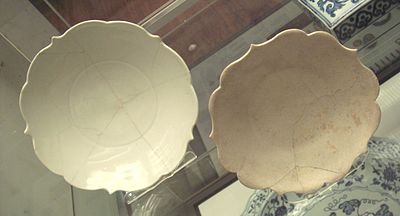 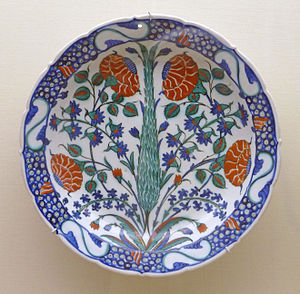 İznik pottery, an example of fritware 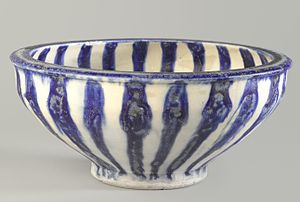 Fritware, also known as stone-paste, is a type of pottery in which frit is added to clay to reduce its fusion temperature. The formula may include quartz or other siliceous material. An organic compound such as gum or glue may be added for binding.[1] As a result, the mixture can be fired at a lower temperature than clay alone. A glaze, processed at a higher temperature, was then applied on the surface to harden the object.[1]

It seems to have been first manufactured in Iraq in the 9th century.[1] Egypt was the main center of manufacture between the 10th and the 12th century, but it then spread throughout the Middle-East until modern times.[1]

Fritware was invented to give a stronger and whiter body to its pottery material, which, combined with tin-glazing of the surface, allowed it to approximate the result of Chinese porcelain. True porcelain was not manufactured in the Islamic world until modern times, and most fine Islamic pottery was fritware until then. Frit was also a significant component in some early European porcelains (see Frit).

In the 13th century the town of Kashan in Iran was an important centre for the production of fritware.[2] Abū'l-Qāsim, who came from a family of tilemakers in the city, wrote a treatise in 1301 on precious stones that included a chapter on the manufacture of fritware.[3] His recipe specified a fritware body containing a mixture of 10 parts silica to 1 part glass frit and 1 part clay. The frit was prepared by mixing powdered quartz with soda which acted as a flux. The mixture was then heated in a kiln.[4] This type of pottery has also been referred to as "stonepaste" and "faience" among other names.[5] A ninth-century corpus of 'proto-stonepaste' from Baghdad has "relict glass fragments" in its fabric.[6] The glass is alkali-lime-lead-silica and, when the paste was fired or cooled, wollastonite and diopside crystals formed within the glass fragments. The lack of "inclusions of crushed pottery" suggests these fragments did not come from a glaze.[7] The reason for their addition would have been to release alkali into the matrix on firing, which would "accelerate vitrification at a relatively low firing temperature, and thus increase the hardness and density of the [ceramic] body."

Iznik pottery was produced in Ottoman Turkey beginning in the last quarter of 15th century AD.[8] It consists of a body, slip, and glaze, where the body and glaze are 'quartz-frit'.[9] The 'frits' in both cases "are unusual in that they contain lead oxide as well as soda"; the lead oxide would help reduce the thermal expansion coefficient of the ceramic.[10] Microscopic analysis reveals that the material that has been labeled 'frit' is 'interstitial glass' which serves to connect the quartz particles.[11] The glass was added as frit and that the interstitial glass formed on firing. 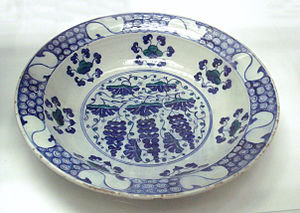