Fritz Todt (4 September 1891 – 8 February 1942) was a German engineer, senior Nazi figure, Reich Minister for Armaments and Ammunition, and the founder of Organisation Todt. He died in a plane crash during World War II.

In World War I, he initially served with the infantry and then as front line reconnaissance observer within the Luftstreitkräfte (the German Air Forces – DLSK), winning the Iron Cross. After his military service, he finished his studies in 1920 and joined at first the "Grün & Bilfinger AG, Mannheim" company and, later, the civil engineering company Sager & Woerner (1921).

He joined the Nationalsozialistische Deutsche Arbeiterpartei (NSDAP), better known as the Nazi Party, on 5 January 1922. In 1931, he became an Oberführer (senior Colonel) in the Sturmabteilung (SA), which was then commanded by Ernst Röhm. That year, Todt also completed his doctorate (on "Fehlerquellen beim Bau von Landstraßendecken aus Teer und Asphalt" – "Sources of defects in the construction of tarmac and asphalt road surfaces").[1]

Following the appointment of Hitler as Reichskanzler on 30 January 1933, Todt became (in July) Generalinspektor für das deutsche Straßenwesen ("Inspector General for German Roadways") and was involved in the new construction company for the motorways (Reichsautobahnen).[2] He later became Leiter des Hauptamts für Technik in der Reichsleitung der NSDAP ("Director of the Head Office for Engineering in the National Directorate of the NSDAP") and Generalbevollmächtigter für die Regelung der Bauwirtschaft ("General Commissioner for the Regulation of the Construction Industry"). As a special privilege, Todt was permitted to have considerable power and was not necessarily immediately answerable to any of the Reich ministries. He was also appointed to the rank of Generalmajor of the Luftwaffe after its official promulgation in March 1935. For his work on the autobahnen, Todt was recognized with the German National Prize for Art and Science by Hitler, an award devised as a replacement for the Nobel Prize which Hitler forbade Germans from accepting in 1936. 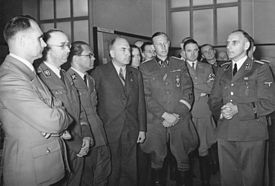 In 1938, he founded the Organisation Todt (OT), joining together government firms, private companies and the Reichsarbeitsdienst (Reich Labor Service), for the construction of the "West Wall", later renamed the "Siegfried Line", for the defence of the Reich territory. On 17 March 1940, he was appointed Reichsminister für Bewaffnung und Munition ("Reich Minister for Armaments and Munitions") and oversaw the work of Organisation Todt in the occupied West. After the invasion of the Soviet Union in June 1941, he was appointed to manage the restoration of the infrastructure there.

In 1941, he became increasingly distant from the commanders of the Wehrmacht and from Reichsmarschall Hermann Göring, the Oberbefehlshaber der Luftwaffe (Commander-in-chief of the Luftwaffe) in particular[citation needed]. While he remained close to Hitler at this time, after an inspection tour of the Eastern Front, he complained to him that without better equipment and supplies for the armed forces it would be better to end the war with the USSR[citation needed]. Inevitably, Hitler rejected such an assessment of the situation and carried on the offensive against the Soviets regardless. 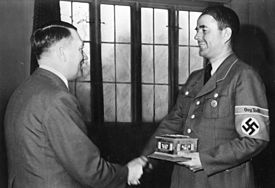 On 8 February 1942, shortly after takeoff from the Wolfsschanze ("Wolf's Lair") airfield near Rastenburg, his aircraft crashed. He was succeeded as Reichsminister by Albert Speer, who had narrowly missed being on the same flight.[3] He was buried in the Invalids' Cemetery in the Scharnhorst-Strasse in Berlin and became the first holder of the Deutscher Orden ("German Order"), the most important award that the Nazi Party could bestow on an individual for "duties of the highest order to the state and party".

It has been suggested that Todt was the victim of an assassination plot, but this has never been confirmed. Albert Speer mentioned[4] the Reich Air Ministry enquiry into the plane accident, which he said ended with this sentence: "The possibility of sabotage is ruled out. Further measures are therefore neither requisite nor intended". Speer thought this wording was "curious."

What was never in dispute, however, was that the OT used millions of forced laborers (Zwangsarbeiter) from the occupied countries of the Reich during World War II, and that the judging panel at the Nuremberg Trials (formally, the "Trial of the Major War Criminals Before the International Military Court") in 1946 sentenced Speer to 20 years' imprisonment for having headed this organisation and thus having sanctioned the illegal use of forced labor.[3]