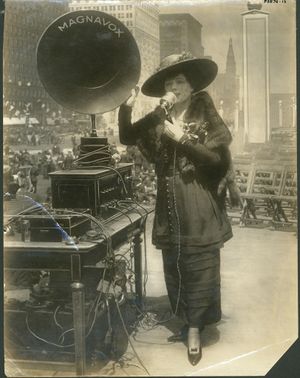 Born Friederike Scheff in Vienna, Austria to Dr. Gottfried Scheff and Anna Yeager, she studied at the Hoch Conservatory in Frankfurt and made her début in Munich in the title röle of Martha (1898). In 1901 she first appeared at the Metropolitan Opera House, New York, singing rôles in La Bohème, Die Meistersinger, Die Walküre, and Don Giovanni. She sang in the Victor Herbert operetta Babette at Washington and New York (1903). Toward the end of the following year's season Scheff became ill and was replaced by her understudy Ida Hawley to close out the remaining performances of Babette.[1] Scheff had immense success as Fifi in Mlle. Modiste (1905–1908 and 1913) and appeared also in The Prima Donna (1908), The Mikado (1910), The Duchess (1911), and The Love Wager (1912). From 1913 to 1918, she appeared principally in vaudeville, returning in the latter year to the musical opera stage in Glorianna.[2]

In 1915 Scheff appeared in her first film, Pretty Mrs. Smith, based on a Broadway play she starred in. It was produced and directed by Hobart Bosworth. She made no other silent pictures. In the late 40s and early 50s Scheff ventured into sound movies and television. She appeared in night clubs and on talk shows such as Ralph Edwards This is Your Life shortly before her death.

She married, first, Baron Fritz von Bardeleben a Prussian nobleman, then in 1908 John Fox, Jr. author of The Trail of the Lonesome Pine, and, in 1913, George Anderson, an actor.[3] She bore no children in any of the marriages.