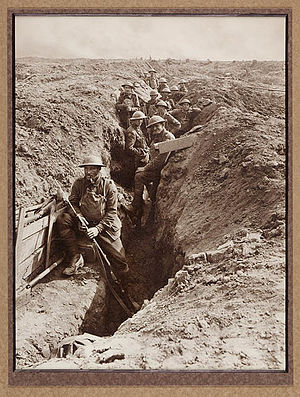 Australians in a front-line trench during World War I. Photograph taken by Capt. F. Hurley, sometime between August 1917 - August 1918.

A front line (alternative forms: front-line or frontline) in military terminology is the position(s) closest to the area of conflict of an armed force's personnel and equipment, generally referring to maritime or land forces. When a front (an intentional or unintentional boundary) between opposing sides form, the front line is the area where the armies are engaged in conflict, especially the line of contact between the opposing forces. In a military conflict, then, when facing the front line, you face the enemy.

All branches of the U.S. armed services use the related technical terms, Forward Line of Own Troops (FLOT) and Forward Edge of Battle Area (FEBA). These terms are used as battlespace control measures that designate the forward-most friendly maritime or land forces on the battlefield at a given point in time during an armed conflict. FLOT/FEBA may include covering and screening forces. The Forward Line of Enemy Troops (FLET) is the FEBA from the enemy's perspective.

Although the term "front line" first appeared in the 1520s, it was only in 1842 that it was recorded used in the military sense. Its first use as an adjective was from 1915.[1]

The word "front" gained the military sense of "foremost part of an army" in the mid-14th century, which, in turn, led the word to take on the meaning "field of operations in contact with the enemy" in the 1660s. That sense led to the phrase home front, which first appeared in 1919.[2]

The attributive adjective version of the term front line (as in "our front-line personnel") describes materiel or personnel intended for or actively in forward use: at sea, on land or in the air: at the front line.

Evolution of the concept

In both the naval and land campaigns of World War I, FEBAs, FLOTs and FLETs could often be identified by eye (for example, in France and Belgium, they were defined by opposing defensive trench systems).

Typical modern conflicts are vastly different, characterised by "war amongst the people," the concept of a " three-block war," and the presence of an asymmetric, 360° threat from irregular or extremist, terrorist combatants. In those cases, the front line, FEBA, FLOT and FLET are almost conceptual ideas. The term "front line" has come to refer more to any place where bullets and bombs are flying or are likely to fly.