From Infogalactic: the planetary knowledge core
Jump to: navigation, search
For the current court, see Frostating Court of Appeal. 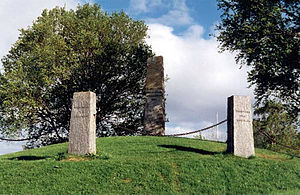 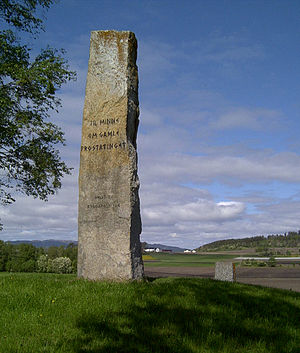 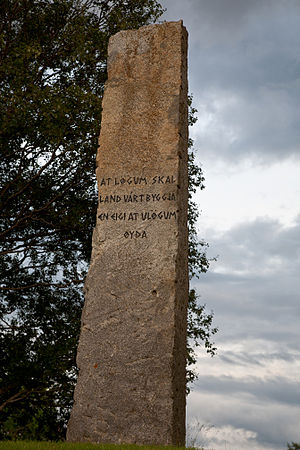 Frostating was the site of an early Norwegian court. Frostating had its seat at Tinghaugen in Frosta municipality in the county of Nord-Trøndelag.[1] [2]

Tinghaugen, from the Old Norse words ting meaning assembly and haugr meaning hill, is close to the medieval church at Logtun. The site is represented by the Frostatinget bautasten at Tinghaugen. Frostating was arguably Norway's oldest court. Frostating covered the 8 counties in Trøndelag including Norđmørafylki (Nordmøre and the original Fosen) and Naumdælafylki (Namdalen in Nord-Trøndelag) and in a later time also Hålogaland. When Norway was united as a kingdom (900–1030), the existing lagtings were constituted as superior regional assemblies, Frostating being one of them. These were representative assemblies at which delegates from the various districts in each region met to award legal judgments and pass laws.[3]

The first germs of democratic evolution appeared in matters of law. The ancient regional assemblies - Frostating, Gulating, Eidsivating and Borgarting - were eventually joined into a single jurisdiction, and King Magnus Lagabøte had the existing body of law put into writing (1263-1280). This compilation of codified law which applied throughout the realm was exceptional for its time, and remained in force until Frederik III, king of the Dano-Norwegian personal union, promulgated absolute monarchy in 1660. This was codified in the King Act of 1665 which functioned as the constitution of the Union of Denmark-Norway until 1814. King Magnus Lagabøte carried out a great effort to modernize the law-code, which gave him his epithet, Magnus the law-mender (Magnús lagabœtir). In 1274, Magnus promulgated the new national law (Magnus Lagabøtes landslov), a unified code of laws to apply for the Kingdom of Norway, including the Faroe islands and Shetland. This replaced the different regional laws which had existed before. A unified code of laws for a whole country had until then only been introduced in the Kingdom of Sicily in the Liber Augustalis promulgated in 1231 by Frederick II, Holy Roman Emperor and the Fuero Real compiled during the reign of Alfonso X of Castile.[4] [5]

The Frostating seal (Frostatingseglet) shows king Magnus Lagabøte seated on his throne and giving the lawman the new Frostating's law (Frostatingsloven) at the Frostating . The seal commemorates Magnus's great effort to modernise the law-code. The representatives to the Thing—three deep—stand on the king's left side. The king sits in the middle on his throne with a crown on his head and a scepter in his hand, and with the Norwegian lion under his foot. Below in the seal are two bowmen; one aiming at a squirrel while the other aims at a bird. Both the squirrel and the bird sit in trees. The original of the Frostating seal is in the Diplomatarium Norvegicum, a source collection of Norwegian letters and documents from earliest recorded history until 1570. The seal is found on a document dated June 1, 1453, in Dipl. Norv. VIII no. 349 .[6]