From Infogalactic: the planetary knowledge core
Jump to: navigation, search
This article is about the merchant family of Augsburg. For other uses of the term, see Fugger (disambiguation).

The Fugger family (German pronunciation: [ˈfʊɡɐ]) is a German family that was a historically prominent group of European bankers, members of the fifteenth and sixteenth-century mercantile patriciate of Augsburg, international mercantile bankers, and venture capitalists. Alongside the Welser family, the family controlled much of the European economy in the sixteenth century and accumulated enormous wealth. This banking family replaced the de' Medici family, who influenced all of Europe during the Renaissance. The Fuggers took over many of the Medicis' assets and their political power and influence.

The founder of the family was Johann Fugger, a weaver at Graben, near the Swabian Free City of Augsburg.[1] His son, also called Johann (or Hans), settled in Augsburg, and the first reference to the Fugger family there is his arrival, recorded in the tax register of 1367. He married Klara Widolf and became an Augsburg citizen. After Klara's death, he married Elizabeth Gfattermann. He joined the weaver's guild, and by 1396 he was ranked high in the list of taxpayers. He added the business of a merchant to that of a weaver.[1]

His eldest son, Andreas Fugger, was a merchant in the weaving trade, and was nicknamed "Fugger the Rich"[2] after buying land and other properties. The Fugger family itemized and inventoried a large number of Asian rugs, an unusual undertaking at the time.[3]

Andreas's son, Lucas Fugger, was granted arms by the Emperor Frederick III, a golden deer on a blue background, and he was soon nicknamed "the Fugger of the Deer".[1] He was too ambitious, however, and went bankrupt.

Hans Fugger's younger son, Jakob the Elder, founded another branch of the family. This branch progressed more steadily and they became known as the "Fuggers of the Lily" after their chosen arms of a flowering lily on a gold and blue background. Jakob was a master weaver, a merchant, and an alderman. He married Barbara Basinger, the daughter of a goldsmith. His fortune progressed, and by 1461, he was the twelfth richest man in Augsburg. He died in 1469.

Jakob's eldest son, Ulrich, took over the business on his father's death, and in 1473 he provided new suits of clothes to Frederick, his son Maximilian I, and his suite on their journey to Trier to meet Charles the Bold of Burgundy and the betrothal of the young prince to Charles's daughter Maria. Thus began a very profitable relationship between the Fugger family and the Habsburgs.

With the help of their brother in Rome, Markus, Ulrich and his brother George handled remittances to the papal court of monies for the sale of indulgences and the procuring of church benefices. From 1508 to 1515 they leased the Roman mint. Ulrich died in 1510.

When the Fuggers made their first loan to the Archduke Sigismund in 1487, they took as security an interest in silver and copper mines in the Tirol. This was the beginning of an extensive family involvement in mining and precious metals.[4] The Fuggers also participated in mining operations in Silesia, and owned copper mines in Hungary. Their trade in spices, wool, and silk extended to almost all parts of Europe.

Ulrich's youngest brother Jakob Fugger (illustration by Albrecht Dürer, below), born in 1459, was to become the most famous member of the dynasty. In 1498 he married Sibylla Artzt, Grand Burgheress to Augsburg, the daughter of an eminent Grand Burgher of Augsburg (German Großbürger zu Augsburg). They had no children, but this marriage gave Jakob the opportunity to elevate to Grand Burgher of Augsburg and later allowed him to pursue a seat on the city council (Stadtrat) of Augsburg. He was elevated to the nobility of the Holy Roman Empire in May 1511, and in 1519, led a consortium of German and Italian businessmen that loaned Charles V 850,000 florins (about 95,625 oz(t) of gold) to procure his election as Holy Roman Emperor over Francis I of France.[5] The Fuggers' contribution was 543,000 florins.

In 1494 the Fuggers established their first public company. Jakob's aim was to establish a copper monopoly by opening foundries in Hohenkirchen and Fuggerau (named for the family, in Carinthia) and by expanding the sales organization in Europe, especially the Antwerp agency. Jakob leased the copper mines in Neusohl (Besztercebánya, today Banská Bystrica, Slovakia) in 1495, eventually making them the greatest mining centre of the time.

At the height of his power Jakob Fugger was sharply criticized by his contemporaries, especially by Ulrich von Hutten and Martin Luther, for selling indulgences and benefices and urging the Pope to rescind or amend the prohibition on the levying of interest. The imperial fiscal and governmental authorities in Nuremberg brought action against him and other merchants in an attempt to halt their monopolistic tendencies.

In 1511, Jakob deposited 15,000 florins as an endowment for some almshouses. In 1514, he bought up part of Augsburg and in 1516 came to an agreement with the city that he would build and provide a number of almshouses for needy citizens. By 1523, 52 houses had been built, and the Fuggerei had come into existence. It is still used today.[6]

Jakob died in 1525. He is considered to be one of the richest persons of all time,[7] and today he is well known as Jakob Fugger "the rich".

Jakob's successor was his nephew Anton Fugger, son of his elder brother Georg. Anton was born in 1493, married Anna Rehlinger, and died in 1560.

In 1525 the Fuggers were granted the revenues from the Spanish orders of knighthood together with the profits from mercury and silver mines.[8] The formerly rich yield of the Tirolean and Hungarian mines decreased, but Anton established new trade ties with Peru and Chile and started mining ventures in Sweden and Norway. He was involved in the slave trade from Africa to America, but was more successful in the spice trade and the importation of Hungarian cattle. Eventually, he was forced to renounce the Maestrazgo lease after 1542 and to give up the silver mines of Guadalcanal. 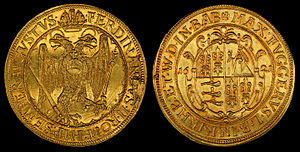 Anton's oldest son, Markus, carried on the business successfully and during the period 1563–1641, earning some 50,000,000 ducats from the production of mercury at Almadén alone, but the Fugger company was completely dissolved after the Thirty Years' War.

The burial chapel of the Fuggers in St. Anne's Church, Augsburg is the earliest example of Renaissance architecture in Germany.

In Augsburg, a museum of Fugger and Welser history (Fugger und Welser Erlebnismuseum) was opened.[10][11]

The following historic buildings are still today owned by the Fugger family: