Fuheis (Arabic: الفحيص‎‎) (also Fuhais) is a town in the Jordanian governorate of Balqa, just 20 kilometers northwest[2] of Amman. The town has town of 20,000 residents, And is an overtly Christian-dominated locality. It lies in the Valley of Jethro (Wadi Shueib), intermediate between Salt and Amman. 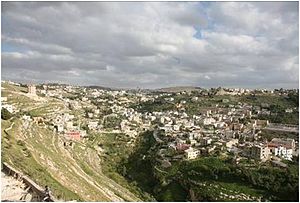 Fuheis is also famous for its traditional habits from singing and dancing (dabke), and for depending on its farms.[3]