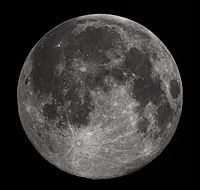 Photograph of the full moon as viewed through a 9.25 inch Schmidt-Cassegrain telescope. This moon was near its greatest northern ecliptic latitude, so the southern craters are especially prominent. 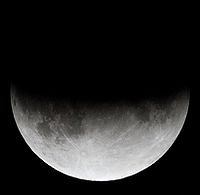 A full moon is the lunar phase that occurs when the Moon is completely illuminated as seen from the Earth. This occurs when the moon is in opposition to the Sun (when it is on the opposite side of the Earth from the Sun; more precisely, when the ecliptic longitudes of the Sun and Moon differ by 180 degrees).[1] This means that the hemisphere of the Moon that is facing the Earth (the near side) is almost fully illuminated by the Sun and appears round (while the far side is almost completely unilluminated).

Lunar eclipses can occur only at full moon, where the Moon's orbit allows it to pass through the Earth's shadow. Lunar eclipses do not occur every month because the Moon usually passes above or below the Earth's shadow (which is mostly restricted to the ecliptic plane). Lunar eclipses can occur only when the full moon occurs near the two nodes of the orbit, either the ascending or descending node. This causes eclipses to only occur about every 6 months, and often 2 weeks before or after a solar eclipse at new moon at the opposite node.

The time interval between similar lunar phases—the synodic month—averages about 29.53 days. Therefore, in those lunar calendars in which each month begins on the new moon, the full moon falls on either the 14th or 15th of the lunar month. Because calendar months have a whole number of days, lunar months may be either 29 or 30 days long. 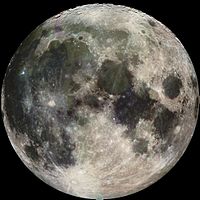 Composite image of the Moon as taken by the Galileo spacecraft on 7 December 1992. The color is "enhanced" in the sense that the CCD camera is sensitive to near infrared wavelengths of light beyond human vision. 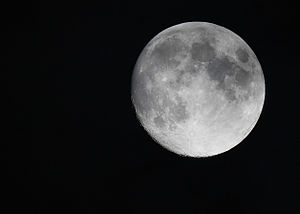 A full moon is often thought of as an event of a full night's duration. This is somewhat misleading because the Moon seen from Earth is continuously becoming larger or smaller (though much too slowly to notice with the naked eye). Its absolute maximum size occurs at the moment expansion has stopped. For any given location, about half of these absolute maximum full moons will be potentially visible, as the other half occur during the day, when the full moon is below the horizon. Many almanacs list full moons not just by date, but by their exact time as well, usually in Coordinated Universal Time (UTC). Typical monthly calendars that include phases of the Moon may be off by one day if intended for use in a different time zone.

Full moons are generally a poor time to conduct astronomical observations, since the bright reflected sunlight from the Moon overwhelms the dimmer light from stars.

On 12 December 2008, the full moon occurred closer to the Earth than it had at any time for the previous 15 years.[2]

The date and approximate time of a specific full moon (assuming a circular orbit) can be calculated from the following equation:[4]

where d is the number of days since 1 January 2000 00:00:00 in the Terrestrial Time scale used in astronomical ephemerides; for Universal Time (UT) add the following approximate correction to d:

where N is the number of full moons since the first full moon of 2000. The true time of a full moon may differ from this approximation by up to about 14.5 hours as a result of the non-circularity of the moon's orbit.[5] See New moon for an explanation of the formula and its parameters.

The age and apparent size of the full moon vary in a cycle of just under 14 synodic months, which has been referred to as a full moon cycle.

In folklore and tradition 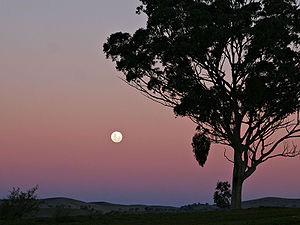 Full moon rising, seen through the Belt of Venus

Full moons are traditionally associated with temporal insomnia (inability to sleep), insanity (hence the terms lunacy and lunatic) and various "magical phenomena" such as lycanthropy. Psychologists, however, have found that there is no strong evidence for effects on human behavior around the time of a full moon.[6] They find that studies are generally not consistent, with some showing a positive effect and others showing a negative effect. In one instance, the 23 December 2000 issue of the British Medical Journal published two studies on dog bite admission to hospitals in England and Australia. The study of the Bradford Royal Infirmary found that dog bites were twice as common during a full moon, whereas the study conducted by the public hospitals in Australia found that they were less likely. All this is relevant to canine rather than human behavior. 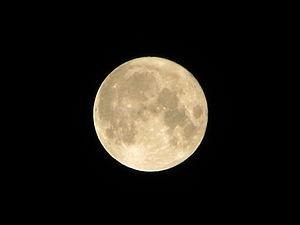 The full moon, as observed from Earth on a clear night.

Historically, month names are names of moons (lunations, not necessarily full moons) in lunisolar calendars. Since the introduction of the solar Julian calendar in the Roman Empire, and later the Gregorian calendar worldwide, month names have ceased to be perceived as "moon names". The traditional Old English month names were equated with the names of the Julian calendar from an early time (soon after Christianization, according to the testimony of Bede ca. AD 700).

Some full moons have developed new names in modern times, e.g., the blue moon, and the names "harvest moon" and "hunter's moon" for the full moons of autumn. 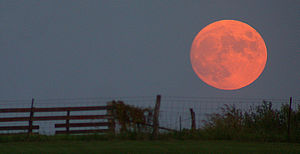 A harvest moon. Its orange color is due to its closeness to the horizon, rather than being unique to harvest moons.[7]

The "harvest moon" and "hunter's moon" are traditional terms for the full moons occurring during late summer and in the autumn, in the northern hemisphere usually in August, September and October respectively. The "harvest moon" is the full moon closest to the autumnal equinox (22 or 23 September), and the "hunter's moon" is the one following it. The names are recorded from the early 18th century.[8] OED for "harvest moon" cites a 1706 reference, and for "hunter's moon" a 1710 edition of The British Apollo, where the term is attributed to "the country people" (The Country People call this the Hunters-Moon.) The names became traditional in American folklore, where they are now often popularly attributed to the Native Americans.[9] The Feast of the Hunters' Moon is a yearly festival in West Lafayette, Indiana, held in late September or early October each year since 1968.[10] In 2010, the Harvest moon occurred on the night of equinox itself (some 5​1⁄2 hours after the point of equinox) for the first time since 1991.[11][12]

All full moons rise around the time of sunset. Because the moon moves eastward among the stars faster than the sun its meridian passage is delayed, causing it to rise later each day – on average by about 50.47 minutes.[13] The harvest moon and hunter's moon are unique because the time difference between moonrises on successive evenings is much shorter than average. The moon rises approximately 30 minutes later from one night to the next, as seen from about 40 degrees N or S latitude. Thus, there is no long period of darkness between sunset and moonrise for several days following the actual date of the full moon.

An early list of "Indian month names" was published in 1918 by Daniel Carter Beard in his The American Boy's Book of Signs, Signals and Symbols for use by the boy scouts. Beard's "Indian" month names were:[15]

Such names have gained currency in American folklore. They appear in print more widely outside of the almanac tradition from the 1990s in popular publications about the Moon. Mysteries of the Moon by Patricia Haddock ("Great Mysteries Series", Greenhaven Press, 1992) gave an extensive list of such names along with the individual tribal groups they were supposedly associated with.[16] Haddock supposes that certain "Colonial American" moon names were adopted from Algonquian languages (which were formerly spoken in the territory of New England), while others are based in European tradition (e.g., the Colonial American names for the May moon, "Milk Moon", "Mother's Moon", "Hare Moon" have no parallels in the supposed native names, while the name of November, "Beaver Moon" is supposedly based in the Algonquin).

The individual names given in Farmers' Almanac include:[clarification needed]

The Long Night's Moon is the last of the year and the closest to the winter solstice.[18]

The December 2015 full moon coincided with Christmas day.[22] This last occurred in 1977, with a Christmas Eve full moon between in 1996. A small horizontal libration is visible comparing their appearances. By the 19-year metonic cycle the full moon will repeat again on Christmas day in 2034, 2053, 2072, and 2091.[23]
Main article: Lunar calendar

Most pre-modern calendars the world over were lunisolar, combining the solar year with the lunation by means of intercalary months. [24][25] The Julian calendar abandoned this method in favour of a purely solar reckoning while conversely the 7th-century Islamic calendar opted for a purely lunar one.

A continuing lunisolar calendar is in the Hebrew calendar. Evidence of this is noted in the dates of Passover and Easter in Judaism and Christianity, respectively. The date of the Jewish Rosh Hashana and Sukkot festivals along with all other Jewish holidays are dependent on the dates of the new moons.[26]

In lunisolar calendars, an intercalary month occurs 7 times in the 19 years of the Metonic cycle, or on average every 2.7 years (19/7). In the Hebrew Calendar this is noted with a periodic extra month of Adar in the early spring.

In the modern system of "traditional" full moon names tied to the solstice and equinox points, a supernumerary full moon in such a period is called a blue moon. The term "blue moon" used in this sense may date to as early as the 16th century, but it became well known in the United States due to the Farmers' Almanac (published since 1818).[27]

According to the Farmers' Almanac, a "blue moon" is the third full moon in any period between either solstice and equinox, or between equinox and solstice, (calculated using the mean tropical year), which contains four full moons.[28] These seasons are equal in length, unlike the astronomical ones, which vary in length depending on the Earth's speed in its elliptical orbit round the sun. To compare, in 1983 the equal length seasons began at 1.48 AM on 23 March, 9.15 AM on 22 June, 4.42 PM on 21 September and 12.10 AM on 22 December, while the astronomical seasons began at 4.39 AM on 21 March, 11.09 PM on 21 June, 2.42 PM on 23 September and 10.30 AM on 22 December (all times GMT). Due to a misinterpretation of this definition in the March 1946 Sky & Telescope magazine, "blue moon" has also been used in the sense of "the second full moon in any month which contains two full moons (this usage has been noted as "erroneous" by Sky & Telescope in 1999).[29] According to either definition, "blue moons" occur with the average frequency of intercalary months, seven times in 19 years, the Farmers' Almanac system of "full moon names" effectively defining a lunisolar calendar.