Fuquay-Varina /ˈfjuːkweɪ vəˈriːnə/ is a town in Wake County, North Carolina, United States. The population was 18,644 in 2012 (State Certified as of July 1, 2012). The population was 17,937 at the 2010 census,[1] up from 7,898 at the 2000 census. The town is a 25-minute drive south of Raleigh, the capital of North Carolina. The hyphenated name attests to the town's history as two separate towns. Fuquay Springs and Varina merged in 1963 to create the modern town. Economically, the town initially grew due to tobacco trade and agriculture, but has seen recent population growth and real estate development due to its proximity to the Research Triangle Park.

Fuquay-Varina is located in the northeast central region of North Carolina, where the North American Piedmont and Atlantic Coastal Plain regions meet. This area is known as the "fall line" because it marks the elevation inland at which waterfalls begin to appear in creeks and rivers. Its central Piedmont location situates Fuquay-Varina about three hours west of Atlantic Beach, North Carolina, by car and four hours east of the Great Smoky Mountains.

Frenchman William Fuquay first settled in the small farming town of Sippihaw, named for the original Native American tribe that inhabited the area. Although there is no history of a tribe called Sippihaw, there are historical accounts in the area of a tribe called Susippihaw. His great-grandson, a tobacco farmer named Stephen, discovered a spring in the mid-19th century, while plowing the fields of the family plantation. Originally used solely for drinking water, Stephen soon came to the conclusion that the mineral water flowing from the springs had healing properties, and it actually may be true, due to the cooking practices of the time, to cook food till it lost its vitamins and minerals. As word spread, locals began to help the springs establish this reputation, which brought residents from neighboring communities and counties to its waters. The springs were eventually walled in to better serve the tourists coming to the area by road or rail.

In 1860, Fuquay sold the springs to a group of local investors who formed the Chalybeate Springs Company to market the attraction and its waters. At that time another Sippihaw resident, J. D. "Squire" Ballentine, was returning home from the Civil War. Ballentine had been the town’s schoolmaster before going off to fight for the Confederate Army. During his tour of duty, he had received letters from one of many southern ladies who wrote to the troops to improve their morale. Originally signing her name "Varina", perhaps an homage to the wife of Jefferson Davis, Virginia Avery would later meet and fall in love with Ballentine. He continued to call her Varina throughout their life together. When he became the first postmaster at the new post office in town in 1880, he named it "Varina" in her honor. A community grew just south of the springs, near the post office and the couple's Varina Mercantile Company general store. In time, it adopted the same name. Ballentine's business success allowed him to construct the Ballentine Spence House in 1910, the first house to have plumbing and electricity in the area. This house, a local historic landmark, still stands today.[4]

Growth around the start of the 20th century 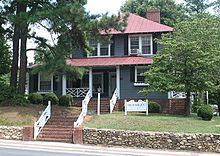 The Fuquay Mineral Spring's popularity grew around the start of the 20th century, especially in the 1890s as local businessman John Mills developed the idea to offer "Moonlight Excursions" to the springs. He fitted flat rail cars with seats and offered nighttime train trips to southern Wake County from Raleigh. As more guests came to the springs to "take the waters", a group of small hotels sprung up in town, along with restaurants, barbecue stands, and a dance pavilion with a player piano. The town became a tourist destination and was the site of special celebrations on Fourths of July and Easter Mondays. During these events, residents of Raleigh would take the train down to watch the accompanying baseball games and participate in the dances and celebrations. Hotels like the Ben Wiley Hotel catered to the out-of-towners and became as much a center of town life as the springs. In 1902, Sippihaw was renamed "Fuquay Springs" in honor of its founding family and was officially incorporated in 1909.

When it was incorporated, the new Fuquay Springs town limits included the core of the neighboring town of Varina, consisting of its business district and the rail junction of the Cape Fear and Northern Railway and the Norfolk Southern Railway. But Varina reestablished itself the following year when the Varina Union Station was erected and a new post office was created, spurred by the lobbying of Ballentine. Four years later, the Bank of Varina was established, competing directly with the Bank of Fuquay (now Fidelity Bank). Several warehouses for the growing tobacco business were built in town over the next few years, capitalizing on the railroad connections. Another supply store and a knitting factory followed. As Varina came into its own as a hub for area agriculture, the Fuquay Springs Corporation was formed and began bottling and selling mineral water from the springs commercially. Area businesses continued to develop and, in 1927, U.S. Route 401 was paved through town, shortening travel times to Raleigh and nearby communities.[4]

Unification and the present

By this time, Fuquay Springs and Varina had become major trading hubs for southern Wake County as well as neighboring Harnett and Johnston counties. Yet improvements to automobiles and area roads caused a decline in tourism at the springs. Rather than visiting the springs, residents in the region chose to visit the coast as travel times decreased. During this time, however, the tobacco industry continued to drive the area economy, with five warehouses, a cotton buyer, and fifteen stores established by the end of the 1920s. The shared emphasis on agricultural and industrial growth brought the towns to a shared vision, and as their residents worked, played, and attended church together, the towns merged into Fuquay-Varina in 1963. 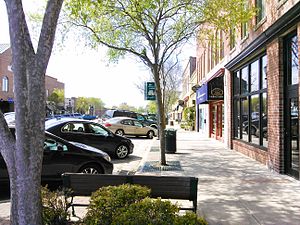 While development in the area today includes numerous residential communities and commercial sites along the major roadways into town, many of the older structures from its past remain within the town limits. The Victorian, Craftsman, and Colonial Revival homes constructed in the late 19th century and early 20th century are contributing structures to the Fuquay Springs Historic District, while the downtown shops and businesses are part of the Varina Commercial Historic District. Area landmarks located in these districts include the Ben-Wiley Hotel, the Ballentine-Spence House, and the Dr. Wiley S. Cozart House, built across the street from the springs by the original owner and proprietor of the Ben Wiley. The springs are now contained in a small park developed on the site in 1945 which was handed over to the town in 1998 to maintain as a historic park. Mr. Lexie McLean owned and operated McLean's Grocery on Academy Street for many years. Mr McLean was a community leader and considered a major factor in the growth and development of the Fuquay-Varina area. Mr. Edward N. Farnell was the principal of the Fuquay Spring High School from 1952 through 1967. Mr. Farnell was an important community leader and educator; many of his students went on to become community and state leaders.

Fuquay-Varina is also the former hometown of internet personalities Rhett McLaughlin and Link Neal, who moved their studio there in 2010, as well as Link who until then lived in Apex, North Carolina.

There were 3,122 households out of which 36.8% had children under the age of 18 living with them, 48.8% were married couples living together, 15.5% had a female householder with no husband present, and 31.9% were non-families. 26.3% of all households were made up of individuals and 10.8% had someone living alone who was 65 years of age or older. The average household size was 2.48 and the average family size was 2.99.

The area is served by Wake Technical Community College, which is located between Fuquay-Varina and Raleigh. The 2007 enrollment was approximately 57,000 and is projected to grow to 78,000 by 2015.[11]

The town is served by the following parks:[12]