From Infogalactic: the planetary knowledge core
(Redirected from Furrier)
Jump to: navigation, search 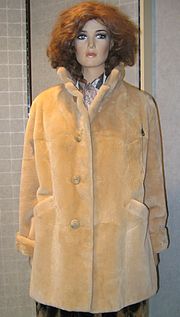 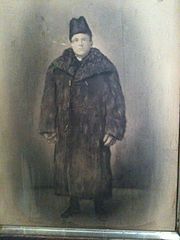 A French-Canadian man wearing a fur coat and hat around 1910.

Fur clothing is clothing made of furry animal hides. Fur is one of the oldest forms of clothing; thought to have been widely used as hominids first expanded outside Africa. Some view fur as luxurious and warm; however others reject it due to moral beliefs. The term 'a fur' is often used to refer to a coat, wrap, or shawl made from the fur of animals. Controversy exists regarding the wearing of fur coats, due to animal cruelty concerns. 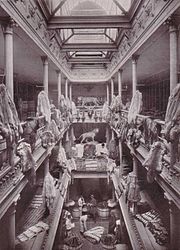 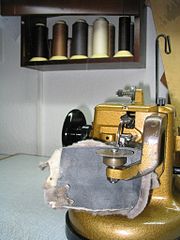 Fur is generally thought to have been among the first materials used for clothing and bodily decoration. The exact date when fur was first used in clothing is debated. It is known that several species of hominoids including Homo sapiens and Homo neanderthalensis used fur clothing.

Fur is still worn in most mild and cool climates around the world due to its superior warmth and durability. From the days of early European settlement, up until the development of modern clothing alternatives, fur clothing was popular in Canada during the cold winters. The invention of inexpensive synthetic textiles for insulating clothing led to fur clothing falling out of fashion.

Fur is still used by indigenous people and developed societies, due to its availability and superior insulation properties. The Inuit peoples of the Arctic relied on fur for most of their clothing, and it also forms a part of traditional Russian, Scandinavian and Japanese clothing.

It is also sometimes associated with glamour and lavish spending. A number of consumers and designers—notably British fashion designer and outspoken animal rights activist Stella McCartney—reject fur due to moral beliefs and perceived cruelty to animals.[1]

Animal furs used in garments and trim may be dyed bright colors or with patterns, often to mimic exotic animal pelts: alternatively they may be left their original pattern and color. Fur may be shorn down to imitate the feel of velvet, creating a fabric called shearling.

Common animal sources for fur clothing and fur trimmed accessories include fox, rabbit, mink, muskrat, beaver, stoat (ermine), otter, sable, seals, cats, dogs, coyotes, chinchilla, and possum.[2] Some of these are more highly prized than others, and there are many grades and colors.

In Europe and Asia, cheap and plentiful dog and cat fur is sold under different names to disguise the origin from shoppers in the United States, such as dog fur being labeled "Mongolian Wolf".[3] In a study by the Humane Society of the United States, all twenty-five fur trim coats from twenty different retailers were found to be mislabeled, usually in the case of fur from an animal that it is illegal to kill for fur being labeled as a legal animal.[3] One example of this was a coat being labeled as having fur from a raccoon, when in reality DNA testing proved that the fur came from a raccoon dog.[3] 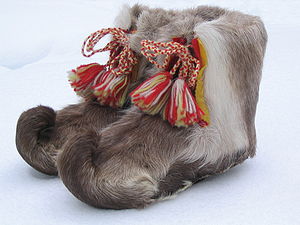 The manufacturing of fur clothing involves obtaining animal pelts where the hair is left on. Depending on the type of fur and its purpose, some of the chemicals involved in fur processing may include table salts, alum salts, acids, soda ash, sawdust, cornstarch, lanolin, degreasers and, less commonly, bleaches, dyes and toners (for dyed fur).[4] Workers exposed to fur dust created during fur processing have been shown to have reduced pulmonary function in direct proportion to their length of exposure.[5]

In contrast, leather made from any animal hide involves removing the fur from the skin and using only the tanned skin. The use of wool involves shearing the animal's hair from the living animal, so that the wool can be regrown. Fake fur (or "faux fur") designates any synthetic material that attempts to mimic the appearance and feel of real fur.

The chemical treatment of fur to increase its felting quality is known as carroting, as the process tends to turn the tips of the fur a carrot orange color. A furrier is a person who makes fur products as fur garments, fur blankets etc. and repairs, alters, cleans, or otherwise deals in furs of animals.

Anti-fur campaigns reached a peak in the 1980s and 1990s, with the participation of numerous celebrities.[6] Fur clothing has become the focus of boycotts on the opinion that it is cruel and unnecessary. PETA and other animal rights organizations, celebrities, and animal rights ethicists, have called attention to fur farming.

Animal rights advocates object to the trapping and killing of wildlife, and to the confinement and killing of animals on fur farms due to concerns about the animals suffering and death. They may also condemn "alternatives" made from synthetic (oil-based) clothing as they promote fur for the sake of fashion. Protests also include objection to the use of leather in clothing, shoes and accessories.

Some animal rights activists have disrupted fur fashion shows with protests, while other anti-fur protesters may use fashion shows featuring faux furs or other alternatives to fur clothing as a platform to highlight animal suffering from the use of real leathers and furs. These groups sponsor "Compassionate Fashion Day" on the third Saturday of August to promote their anti-fur message. Other groups participate in "Fur Free Friday", an event held annually on the Friday after Thanksgiving (Black Friday) that occurs globally with the intent to bring the issue of fur to light through educational displays, protests and other methods of campaigning.

In Canada, opposition to the annual seal hunt is viewed as an anti-fur issue, although the Humane Society of the United States claims that its opposition is to "the largest slaughter of marine mammals on Earth."[7] IFAW, an anti-sealing group, claims that Canada has an "abysmal record of enforcement" of anti-cruelty laws surrounding the hunt.[8] A Canadian government survey[9] indicated that two-thirds of Canadians supported the hunting of seals if the regulations under Canadian law are enforced.

Products from all marine mammals, even from non-threatened populations and regulated hunts, such as the Canadian seal hunt, are banned in the United States, with minor exceptions for Alaska Natives.[10]

The fur trade is the worldwide buying and selling of fur for clothing and other purposes. The fur trade was one of the driving forces of exploration of North America and the Russian Far East.