Ekman was born in Stockholm, Sweden and was the son of the director Hasse Ekman and Agneta (née Wrangel).[3] Ekman represents the third generation in a family of prominent Swedish actors. First in the line was his paternal grandfather, also named Gösta Ekman (senior), followed by his father Hasse Ekman, a successful film director and actor. Ekman's theatrical family also includes his brothers Stefan Ekman and Mikael Ekman, a stage director, and his niece, Sanna Ekman, an actress. He has been married since 1989 to artist and film director Marie-Louise Ekman, previously Marie-Louise De Geer Bergenstråhle, née Fuchs. Ekman sometimes appears in credits as Gösta Ekman, Jr. to avoid being confused with his famous grandfather.

He was an assistant director to Per-Axel Branner, Hasse Ekman, Stig Olin, Bengt Ekerot and Ingmar Bergman from 1956 to 1961. Ekman started his acting career in the theaters, such as the Alléteatern from 1956 to 1957, Munkbroteatern in 1959 and the Stockholm City Theatre in 1960.[3] He has also appeared in several Swedish films, including the Jönssonligan series. He is most famous for his comedic works, especially his collaboration with the comic duo Hasseåtage on stage and in films—where he often played the leading parts. His body of work, though, includes a number of genres, including a series of dramatic police films, in which he played the famous fictional Swedish policeman Martin Beck.

While Ekman officially retired from stage and film work in 2003, he returned in 2005 to play leading parts in his wife's two films, Asta Nilssons sällskap and Pingvinresan. In 2007, he directed the play Gäckanden for the Swedish Royal Dramatic Theatre in Stockholm.

Ekman won the Swedish film award Guldbagge Award in 1993 for his role as policeman Martin Beck in the Guldbagge-winning film The Man on the Balcony, based on the 1967 novel by Maj Sjöwall and Per Wahlöö. Ekman also won the special Hedersguldbaggen (Honorable Guldbagge) award in 2008 for his service to the Swedish film and theater industry. 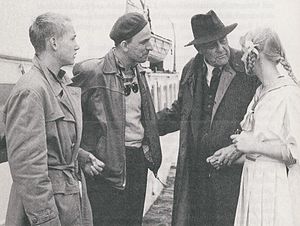 From the left: Gösta Ekman, Ingmar Bergman, Victor Sjöström, and Lena Bergman during the filming of Smultronstället (1957).

I was a celebrity even as a sperm.

— Gösta Ekman on being his father's son, as well as being named after his grandfather, both being famed actors.