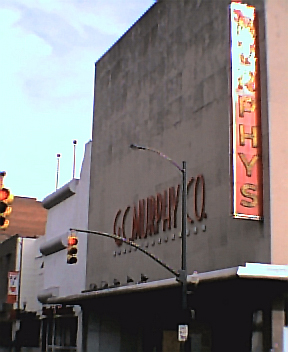 G.C. Murphy's Richmond, Virginia, store on Broad Street and Fourth designed by Murphy corporate architect Harold Ellsworth Crosby. It was demolished to make way for a parking lot in 2004.

G.C. Murphy was a chain of five and dime or variety stores in the United States from 1906 into the 1980s.

The chain was founded in 1906 in the Pittsburgh suburb of McKeesport, Pennsylvania, by George Clinton Murphy. Murphy had gotten his start in retail as a manager of a McCrory's store in 1896. Murphy later moved to Detroit, Michigan, to manage several stores there, and then returned to the Pittsburgh, Pennsylvania, area to launch his own stores. His namesake chain was founded in 1906. It was one of several large retailers to originate in Pennsylvania.[1]

Murphy died in April 1909, three years after the launch of the chain.[2]:13 Two former McCrory's executives, John Sephus Mack and Walter C. Shaw, bought the G.C. Murphy chain, which was at the time about 12 stores, that same year. The chain quickly expanded both through new stores and purchase of competitors.[1]

Murphy's expanded cautiously during the 1920s, letting it cope with the Great Depression better than other retailing chains:[2]:47 Sales in 1930 were reported to have risen about 9% ($17 million). By 1932, however sales had dropped 3.7%. The retailing company never let go of their employees during this time, although they did have to get rid of over time pay and dock employees for absences.[2]:49–51

Murphy's stores became popular in part because of their locations; many locations were in small and medium-sized towns that had previously been served only by stores owned by whatever mining company was based there. The lunch counters in the stores were a popular destination for quick and inexpensive meals (prior to the rise of the fast food chain). Murphy's stores were designed in house and to a high standard, led by architects like Harold Ellsworth Crosby.

The chain began testing larger store concepts; in 1955, it opened several locations in shopping centers. In 1970, it opened its first large scale store, branded as "Murphy's Mart". The stores were similar in size and concept to Kmart, and were often located in suburbs. By 1976, the G.C. Murphy Company had grown to 529 stores.

Changes and suspension of business

In April 1985, the company was acquired by Ames Department Stores Inc. for $196.5 million ($447.6 million today)[3] Ames rebranded many of the larger "Murphy's Mart" stores. In 1989, Ames decided to sell the variety stores (while retaining the former Murphy's Mart), and sold the division to the McCrory's chain led by Meshulam Riklis. McCrory's rebranded some and closed others. The McCrory's chain filed for bankruptcy in 1992, closed many of their stores (including former G.C. Murphy's outlets) in 1997, and ceased its remaining operations in 2001.[4]

Although the stores ceased business operations some time ago, the chain's foundation, the G.C. Murphy Foundation, is still in existence. Retirees and former employees of the stores have a volunteer organization that allows them to keep in touch.

In 2005, the Pittsburgh Post-Gazette reported that the Murphy Foundation had commissioned a writer to compile the G.C. Murphy Company's history.[5] That history, titled For the Love of Murphy's: The Behind-the-Counter Story of a Great American Retailer, by Jason Togyer, was published in 2008 by Pennsylvania State University Press.[6]