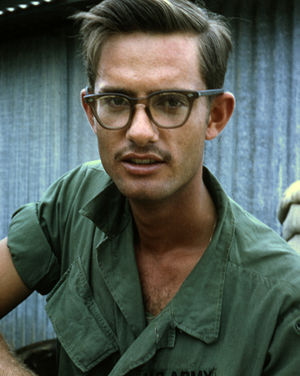 GI glasses are eyeglasses issued by the American military to its service members. Dysphemisms for them include the most common "birth control glasses" (also called "BCGs") and other variants. At one time, they were officially designated as regulation prescription glasses, or RPGs. This was commonly said to mean "rut prevention glasses" due to their unstylish appearance.

The original version was designed for use with gas masks during World War II. It was wire-rimmed with cable temples and a "P3" lens shape. The design was a modification of the "panto" shape used by the British military.[1]

In the late 1970s, the lens shape was re-designed to the "S9". Black "S9" frames were released for a brief period,[2] before brown cellulose acetate replaced the black. The brown cellulose acetate frames were discontinued in 2012, and a new smaller unisex lens shape, the "5A", was introduced, with a black frame. The modern "5A" shape was designed by Rochester Optical, who is the exclusive manufacturer of the R-5A frame.[3]

GI glasses are issued at government expense to new recruits at recruit training or Officer Candidate Schools in the United States military. When entering recruit training, service members may wear civilian glasses until government-issued ones are assigned, including but not limited to the BCG. Contact lenses are never permissible for these exercises. After recruit training, service members are permitted to wear Frame of Choice glasses which are conservative in design and color or contact lenses. The military offers annual replacements for those who qualify, and personnel may request the government issued glasses in addition to several varieties of more attractive eyewear, in clear and tinted lenses, as well as prescription gas mask inserts and inserts for government-funded ballistic eyewear.[4]