From Infogalactic: the planetary knowledge core
(Redirected from GKN Aerospace)
Jump to: navigation, search
For other uses, see GKN (disambiguation).

GKN plc is a British multinational automotive and aerospace components company headquartered in Redditch, Worcestershire. The company was formerly known as Guest, Keen and Nettlefolds and can trace its origins back to 1759 and the birth of the Industrial Revolution.

GKN is listed on the London Stock Exchange and is a constituent of the FTSE 100 Index. 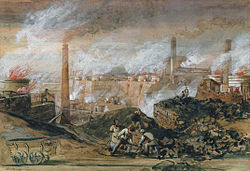 The origins of GKN lie in the founding of the Dowlais Ironworks in the village of Dowlais, Merthyr Tydfil, Wales, by Thomas Lewis and Isaac Wilkinson. John Guest was appointed manager of the works in 1767, having moved from Broseley.[3] In 1786, John Guest was succeeded by his son, Thomas Guest, who formed the Dowlais Iron Company with his son-in-law William Taitt. Guest introduced many innovations and the works prospered.[4]

Under Guest's leadership, alongside his manager John Evans, the Dowlais Ironworks gained the reputation of being "one of the World's great industrial concerns".[5] Though the Bessemer process was licensed in 1856, nine years of detailed planning and project management were needed before the first steel was produced. The company thrived with its new cost-effective production methods, forming alliances with the Consett Iron Company and Krupp.[5] By 1857 G.T. Clark and William Menelaus, his manager, had constructed the "Goat Mill", the world's most powerful rolling mill.[6]

By the mid-1860s, Clark's reforms had borne fruit in renewed profitability. Clark delegated day-to-day management to Menelaus, his trusteeship terminating in 1864 when ownership passed to Sir Ivor Guest. However, Clark continued to direct policy, in particular, building a new plant at the docks at Cardiff and vetoing a joint-stock company. He formally retired in 1897.[5]

Nettlefolds Limited, a leading manufacturer of fasteners, had been established in Smethwick, West Midlands, in 1854 and was acquired in 1902 leading to the change of name to Guest, Keen and Nettlefolds - (GKN).[7][8]

Steel production remained at the core of the company, but under increasing profit margin pressure. Resultantly in 1930, the company amalgamated its steel production business with that of rival Baldwins to form Guest Keen Baldwins, which now held:[10]

In 1935 the company demolished the Cardiff works to construct a new modern production facility on the same site, funded by an issue of debentures.[11] Due to a resultant global shortage of pig iron, in 1937 the company fired-up the single remaining blast furnace at Dowlais.[12]

All of the sites were heavily bombed by the Nazi Luftwaffe during the war, and the required investment meant that all of these assets were nationalised as part of the 1951 Iron and Steel Act, resultantly becoming part of the Iron and Steel Corporation of Great Britain.[13]

However, GKN were still highly reliant on the supply of good quality steel, and so in 1954 negotiated from the asset realisation company the repurchase of key assets from ISC, which were renamed Guest Keen Iron and Steel Co. In 1961 the company's name changed again to GKN Steel Company.[14]

These mergers heralded half a century in which the name GKN became synonymous with the manufacture of screws, nuts, bolts and other fasteners[according to whom?]. The company reflected the vertical integration fashionable at the time embracing activities from coal and ore extraction, and iron and steel making to manufacturing finished goods.

After the First World War it became apparent that Britain was likely to follow France and more recently the United States in developing a large scale auto-industry.[15] GKN acquired another fastener manufacturer, F. W. Cotterill Ltd., in 1919: Cotterill already owned a subsidiary named J. W. Garrington, which specialised in forgings, and it was the forgings produced at the Garrington Darlaston plant, later supplemented by a large plant at Bromsgrove, that enabled GKN to become a major supplier of crankshafts, connecting rods, half-shafts and numerous smaller forged components to the UK auto-industry during and beyond the period of massive expansion between the two world wars.[15]

As a result of complaints from motor manufacturers about the propensity of the then wooden wheels on early cars to disintegrate on the slightest encounter with any roadside kerb,[15] using his experience from tea trays Sankey developed an alternate pressed-steel wheel.[15] Production started in 1908, with customers including Herbert Austin and, later, William Morris.[15] In addition to his original factory at Bilston a new plant was established near Wellington, Shropshire, which was devoted to wheel production.[15]

By the time the business was acquired by GKN, the plant was supplying wheels to many UK manufacturers. By 1969 the highly automated Wellington plant was turning out over 5½ million wheels a year at a maximum rate of approximately 30,000 per day.[15] The business also undertook other automotive related works, including supplying the chassis for the Triumph Herald and its derivatives.[15] They were also at this time building the versatile GKN developed GKN FV432 armoured personnel carrier.[15]

In 1951, a new subsidiary Blade Research & Development (BRD) was formed at Aldridge, Staffordshire, to produce aero-engine turbine blades. Following a fall in demand for turbine blades in the late 1950s, the BRD factory switched to producing constant-velocity joints and driveshafts for vehicles.[16]

In 1966, in a programme of diversification, GKN acquired Birfield Ltd, a company that since 1938 had incorporated both the Sheffield based overdrive manufacturer, Laycock Engineering, and Hardy Spicer Limited of Birmingham, England, a manufacturer of constant-velocity joints.[15] Historically, such joints had few applications, even following the improved design proposed by Alfred H. Rzeppa in 1936. However, in 1959, Alec Issigonis had developed the revolutionary Mini motor car that relied on the Hardy Spicer joints for its front wheel drive technology. The massive expansion in the exploitation of front wheel drive in the 1970s and 1980s led to the acquisition of other similar businesses and a 43% share of the world market by 2002.[7]

On the death of founder Tony Vandervell in 1967, GKN acquired the lucrative Maidenhead based Vandervell bearing manufacturer that was at the time already exporting more than 50% of its output to overseas vehicle manufacturers.[15] This was part of a larger trend for GKN that during this period, under its Managing Director Raymond Brookes, was working to reduce its dependence on UK auto-maker customers at a time when the domestic industry was seen to be stumbling, in response to bewildering "Government interference and fiscal short-sightedness", with British new car registrations in the first four months of 1969 a massive 33% down on the corresponding period of the previous year.[15]

As a result of the large number of mergers, Abram Games was commissioned to developed a new corporate identity in 1969 when the distinctive angular GKN symbol was created and the new company colours of blue and white introduced.[17]

In 1974, GKN acquired Kirkstall Forge Engineering, a manufacturer of truck axles in Leeds.[18]

During the 1980s, GKN sought to invest its earnings from constant-velocity joints in developing other nascent technologies. However, little success attended these efforts and in 1991 the company resolved to abandon further research and to redivert its development efforts towards its constant-velocity joint business in which it was facing increasing competition from Japan.

By 1968, GKN Steel had recreated its downline business, and then started to build its upline business through aggressive building of a steel stockholding business. In 1972 it acquired Firth Cleveland, a hot and cold rolled strip business with a downline in sintered products, reinforcement steels, wire fasteners and garage equipment. In 1973 it exchanged the remaining assets at Dowlais along with £30 million in cash to the nationalised British Steel Corporation,[19] in return for the previously nationalised Brymbo Steelworks.[20] After acquiring steel stockholding competitor Miles Druce and Co, by 1974 the company had created a full integrated steel production and manufacturing business.

However, by the late 1980s, with extensive Japanese competition in both the axle and constant velocity joint business, the company started selling off its steel and fasteners businesses. By 1991, it had disposed of all of the assets within these two business lines. This included the closure of its iconic Bilston factory in the West Midlands in 1989. The factory buildings were demolished soon after, but the offices (built in the late 1950s) were not demolished until 1995.[21]

Having disposed of its steel production asset, in 1991 the company renamed itself GKN plc, focused then solely on military vehicles, aerospace and industrial services.

In 1994 it acquired the helicopter manufacturing business of Westland Aircraft.[7] In 1998 the armoured vehicle business was sold to Alvis plc,[7] and subsequently incorporated into Alvis Vickers Ltd. In July 2000 Finmeccanica and GKN agreed to merge their respective helicopter subsidiaries to form AgustaWestland.[7] In 2004 GKN completed the sale of its 50% shareholding in AgustaWestland to Finmeccanica.[7]

From the late 1990s, the company built a major global business in powder metallurgy, which operates as the GKN Powdered Metallurgy group.[7]

In 2002 GKN acquired a significant stake in - and subsequently by 2004 took over the whole concern - the Japanese manufacturer of differentials and driveline torque systems Tochigi Fuji Sangyo K.K, based in Tochigi-shi, prefecture Tochigi.[22]

GKN went on to acquire Monitor Aerospace Corp in Amityville, New York and Precision Machining in Wellington, Kansas in 2006,[23] part of the Airbus plant at Filton near Bristol for £150 million in 2008[24] and all of Getrag's axle business and axle manufacturing facilities in 2011.[25]

In 2011 GKN Aerospace Engineering services division was acquired by QuestGlobal.[26]

In July 2012 GKN agreed to acquire the Swedish aerospace components manufacturer Volvo Aero from AB Volvo for £633 million (US$986 million).[27][28]

Following Kevin Smith's retirement at the end of 2011, Nigel Stein took over as Chief Executive on 1 January 2012.[29]

The company is organised as follows:[2]