GOD TV is an international faith-based television network that claims a potential viewership of 951 million viewers.[2] It is said to be available in 262 million homes.[3]

GOD TV is based in the UK, USA and Israel where its global transmission centre is located in Jerusalem.[4] The network has an 'Angel International Campus' in Plymouth, England[5] and regional offices are situated in Kansas City, Hamburg, Cape Town, Nairobi, Chennai, Colombo and Melbourne. GOD TV employs 200 people worldwide.[6]

GOD TV broadcasts non-denominational programming in keeping with the UK Evangelical Alliance Basis of Faith. It's 24-hour schedule features Christian leaders of different backgrounds, ranging from traditional Anglican through to Pentecostal, Full Gospel and Messianic Jewish. GOD TV also produces its own programming some of which has won awards from the Christian Broadcasting Council of the UK.

GOD TV is building a Revival Prayer Centre in Plymouth, England.[7] This will enable GOD TV to host large-scale Christian events similar to its Revival Prayer Centre Consecration event[8] and Summer Celebration held at the Plymouth Pavilions.[9] The network regularly takes viewers on tours of Israel, where it has staged many Live events.[10]

Rory Alec was the network’s CEO for 20 years, up until his resignation in 2014. Formerly Head of Television and Chief Creative Director, Wendy Alec is now the network’s President and CEO. 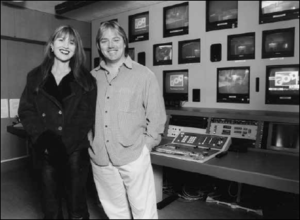 GOD TV was co-founded by Rory Alec and Wendy Alec in England in 1995 as the Christian Channel Europe, the Continent's first daily Christian television network. It started broadcasting on 1 October, initially with two hours each day.[11] This increased to seven hours in 1997 and 24-hours in 1999. The God logo appeared in 1997 and the Christian Channel was rebranded as the God Channel. The God Channel became part of the Dream Family Network, later known as God Digital and then GOD TV in 2002. The same year GOD TV's broadcast uplink was moved to Israel. This provided for international expansion via satellite and GOD TV was launched across Africa and Asia with new offices in Cape Town and Chennai.[12]

In 2003 a GOD TV office was established in the USA, in 2004 a European office opened in Hamburg. Germany and in 2005 GOD TV launched across Australia and New Zealand. A second North American regional office was opened in Orlando, FL.[clarification needed] GOD TV launched on DIRECTV, America’s largest satellite platform in 2006[13] and opened new offices in Colombo and Kansas City in 2008. GOD TV also expanded into China during 2008.[14] Further offices were opened in Nairobi and Melbourne in 2009.

GOD TV's Revival Prayer Centre was consecrated to God by Benny Hinn in 2014[15] and GOD TV’s UK staff moved into its Angel International Campus in Plymouth in June.[16]

GOD TV announced on 2 October 2014 that Rory Alec had stepped aside due to "moral failure."[17] Charisma Magazine broke the news in the media with the headline: "Citing Moral Failure, GOD TV Co-Founder Rory Alec Resigns".[18]

GOD TV carries programming from diverse Christian leaders, various countries and ministry sectors. A list of regular series can be found below.

Much of GOD TV's programming caters towards a youth audience.[19] The network aims to air 'relevant youth programming' that comprises series and events from Soul Survivor with Mike Pilavachi and Andy Croft; !Audacious with Glyn Barrett; RockNations with Steve Gambill and; The Ramp with Karen Wheaton. Youth events often feature top bands such as Leeland; Switchfoot; Rend Collective Experiment; Jars of Clay; Guvna B and New World Son.

Wendy Alec is the executive producer of GOD TV's originally produced programming which includes In Depth interview series and documentaries. GOD TV often features live broadcasts, including worldwide satellite link-ups such as the Global Day of Prayer with Graham Power where GOD TV broadcast from South America for the first time in 2009.[21]

Some of GOD TV's speakers are considered controversial. Others have been criticised for teaching a "Gospel of Prosperity" and their finances have been scrutinized by US and UK government agencies. For example, Benny Hinn and Joseph Prince.

GOD TV in the USA

GOD TV launched in the USA in 2006 on DirecTV, America's largest satellite platform, and can be found on channel 365.[22] Glorystar Christian Satellite also includes GOD TV in its channel bouquet (channel 102), and it is also distributed on Galaxy 19 (97W) in the USA, Canada, Mexico, Central America and the Caribbean. Additionally, the network can also be seen in certain US cities via cable.[23]

GOD TV launched in Orlando, Florida in 2012, when it became available on channel 55.2 via digital terrestrial transmission.[24] As part of the Orlando launch, the Bay Revival on Tour was broadcast from Calvary Assembly of God in Winter Park with John Kilpatrick, Nathan Morris and Lydia Marrow.[25] The network maintains an office in Orlando, as well as Kansas City, Missouri.

American singer, actor and writer Pat Boone endorses GOD TV, and has participated in its work.[26] 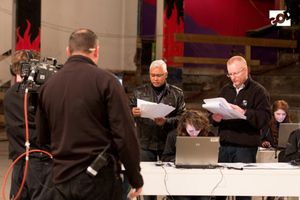 GOD TV broadcasting live from the Revival Prayer Centre in 2014

The Angel Foundation is GOD TV's registered charity in the UK and is regulated by the Charity Commission for England and Wales. Based at Angel House in Sunderland, England, the Angel Foundation states that it is committed to "the advancement of the Christian religion and education, and the relief of poverty, distress and sickness."[28] As of 2010[update] GOD TV was "potentially available to up to 14 million homes in the UK".[29]

Some European networks carry GOD TV in their satellite and cable television packages in Belgium, France,[32] Germany,[33] Ireland, Malta, the Netherlands and Scandinavia. The channel is also available through P2PTV service Zattoo. GOD TV has a European Regional Office in Hamburg, Germany.

In December 2013, GOD TV held a 'Winter Celebration' event in Norway with Andrew Wommack, Nathan Morris and Roy Fields. Following this Rory and Wendy Alec announced they would build a 'Revival Prayer Centre' in Plymouth.[34] According to The Herald (Plymouth) GOD TV signed a 25-year lease in 2013 for the Boulevard building in Union Street, Plymouth, a disused former cinema and nightclub. The Revival Prayer Centre was consecrated in January 2014 by Benny Hinn.[35]

GOD TV became available via satellite throughout in Africa in 2002[36] It is available in Southern Africa via the public bouquet of DSTV and can be watched on the TOP TV satellite platform in South Africa.[37] In December 2011, an agreement was concluded for the terrestrial transmission of GOD TV in Kenya on Kiss TV.[38] The network has an African office in Cape Town, and an East African office in Nairobi, Kenya.

GOD TV in the Middle East

GOD TV has broadcast from Israel since 2001. 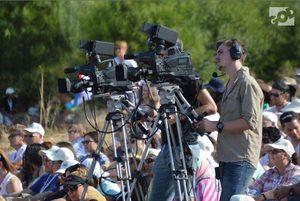 The network hosts tours to Israel which include visiting Bible sites and staging events that are broadcast worldwide. The largest tour to date was in 2008 with 1,800 tour goers who attended 'A Celebration of Israel's 60th Anniversary'. Held at the Davidson Center alongside the Western Wall in the Old City, this was attended by both Jewish and Christian guests.[42]

In 2009 GOD TV partnered with the Jewish National Fund (JNF) US$500,000 to plant trees on land said to be inhabited by Bedouin tribes in Israel's Negev region. A coalition of Jewish and Arab human rights groups denounced the project, accusing GOD TV and the JNF of teaming up to force the Bedouin out of the area to make way for Jewish communities.[43]

GOD TV has broadcast a 'Middle East Special' focusing on the work of Canon Andrew White, who is known as "the Vicar of Baghdad." The author of the book 'Faith Under Fire' he leads St George's Church in Iraq which GOD TV supports monthly helping it to provide food for beleaguered Christians and Muslims in this war-torn city.

GOD TV launched in Asia in 2002. The network can be viewed by cable in cities across India; Indian Television.com includes GOD TV in its list of "best-known spiritual channels."[44] Local programming includes Indian evangelist Sam P. Chelladurai. GOD TV's Asia and the Middle East regional office is in Chennai, India.

The network started reaching China in 2008,[45] viewable via satellite in Greater China and via cable in Nepal, Pakistan, Sri Lanka, Hong Kong and Macau.[46]

GOD TV is also available in Sri Lanka where it has an office in Colombo. Three million viewers can watch GOD TV via cable in Pakistan and it is also on cable in the Mountain Kingdom of Nepal.

GOD TV launched in Australia and New Zealand in 2005[47] and can be watched on the Optus D2 satellite.[48] GOD TV's office for this region is situated in Melbourne. GOD TV launched in the South Sea nation of Vanuatu in 2013.

A major recipient of aid from GOD TV is The Foundation for Reconciliation and Relief in the Middle East and St George's Church in Baghdad, led by Andrew White, which was the beneficiary of funds given by GOD TV following its Middle East Special.[50]

A target of GOD TV's humanitarian work is to provide clean water in arid regions of Africa (Kenya and Tanzania) where it has drilled water wells. A community 'Life Center' has also been built in Tanzania in conjunction with Pat Boone.[51]