GPX, or GPS Exchange Format, is an XML schema designed as a common GPS data format for software applications. It can be used to describe waypoints, tracks, and routes. The format is open and can be used without the need to pay license fees. Location data (and optionally elevation, time, and other information) is stored in tags and can be interchanged between GPS devices and software. Common software applications for the data include viewing tracks projected onto various map sources, annotating maps, and geotagging photographs based on the time they were taken. 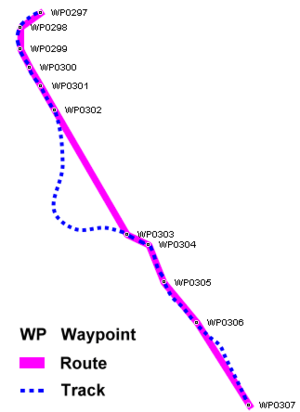 These are the essential data contained in GPX files.[2] Ellipsis (...) means that the previous element can be repeated. Additional data may exist within every markup but is not shown here:

The minimum properties for a GPX file are latitude and longitude for every single point. All other elements are optional. Some vendors, such as Humminbird and Garmin, use extensions to the GPX format for recording street address, phone number, business category, air temperature, depth of water, and other parameters.[4][5]

Latitude and longitude are expressed in decimal degrees using the WGS 84 datum. Elevation is recorded in meters. Dates and times are not local time, but instead are Coordinated Universal Time (UTC) using ISO 8601 format.[1]

The following is a truncated (for brevity) GPX file produced by a Garmin Oregon 400t hand-held GPS unit. This document does not show all functionality which can be stored in the GPX format — for example, there are no waypoints or extensions, and this is part of a track, not a route — but its purpose is to serve as a brief illustration.