From Infogalactic: the planetary knowledge core
Jump to: navigation, search
"City of Truro" redirects here. For the city of Truro in Cornwall, England, see Truro. For other uses, see Truro (disambiguation).

The GWR 3700 Class steam locomotive No. 3440 City of Truro was built in 1903 for the Great Western Railway (GWR) at Swindon Works to a design by George Jackson Churchward. It was partially rebuilt in 1911 and 1915, and renumbered 3717 in 1912. Some consider the locomotive was the first to attain the speed of 100 miles per hour (160.9 km/h) during a run from Plymouth to London Paddington in 1904, a claim that has been the subject of debate.

The locomotive was the eighth of a batch of ten locomotives forming part of the GWR 3700 (or 'City') Class, and was delivered from Swindon Works in May 1903. All ten were named after cities on the GWR system; this batch was originally numbered 3433–42, City of Truro being 3440; like most GWR 4-4-0s, they were renumbered in December 1912, this batch becoming 3710–19 of which City of Truro became 3717. The locomotives were fitted with superheaters in 1910–12, City of Truro being so treated in September 1911. This changed its appearance quite noticeably, as it gained a longer smokebox. Most were later given piston valves instead of their original slide valves, City of Truro in November 1915.[1]

City of Truro was timed at 8.8 seconds between two quarter-mile posts whilst hauling the "Ocean Mails" special from Plymouth to London Paddington on 9 May 1904. This timing was recorded from the train by Charles Rous-Marten, who wrote for The Railway Magazine and other journals. If exact, this time would correspond to a speed of 102.3 mph (164.6 km/h); but Rous-Marten's stopwatch read in multiples of ​1⁄5 second, so the next possible longer time it could register was 9 seconds, corresponding to exactly 100 mph.

Initially, mindful of the need to preserve their reputation for safety, the railway company allowed only the overall timings for the run to be put into print; neither The Times report of the following day[2] nor Rous-Marten's article in The Railway Magazine of June 1904 mentioned the maximum speed. However, the morning after the run two local Plymouth newspapers did report that the train had reached a speed between 99 and 100 miles an hour whilst descending Wellington Bank, Somerset. This claim was based on the stopwatch timings of a postal worker, William Kennedy, who was also on the train.[3]

Rous-Marten first published the maximum speed in 1905, though he did not name the locomotive or railway company:

On one occasion when special experimental tests were being made with an engine having 6 ft. 8 in. coupled wheels hauling a load of approximately 150 tons behind the tender down a gradient of 1 in 90, I personally recorded a rate of no less than 102.3 miles an hour for a single quarter-mile, which was covered in 8.8 seconds, exactly 100 miles an hour for half a mile which occupied 18 seconds, 96.7 miles an hour for a whole mile run in 37.2 seconds; five successive quarter-miles were run respectively in 10 seconds, 9.8 seconds, 9.4 seconds, 9.2 seconds and 8.8 seconds. This I have reason to believe to be the highest railway speed ever authentically recorded. I need hardly add that the observations were made with the utmost possible care, and with the advantage of previous knowledge that the experiment was to be made, consequently without the disadvantage of unpreparedness that usually attaches itself to speed observations made in a merely casual way in an ordinary passenger train. The performance was certainly an epoch-making one. In a previous trial with another engine of the same class, a maximum of 95.6 miles an hour was reached.

Before his death in 1908 Rous-Marten did name the locomotive as City of Truro. Official confirmation from the Great Western Railway came in 1922 when they published a letter written in June 1905 by Rous-Marten to James Inglis, the general manager, giving further details of the record.[5]

...What happened was this: when we topped the Whiteball Summit, we were still doing 63 miles an hour; when we emerged from the Whiteball Tunnel we had reached 80; thenceforward our velocity rapidly and steadily increased, the quarter-mile times diminishing from 11 sec. at the tunnel entrance to 10.6 sec., 10.2 sec., 10 sec., 9.8 sec., 9.4 sec., 9.2 sec., and finally to 8.8 sec., this last being equivalent to a rate of 102.3 miles an hour. The two quickest quarters thus occupied exactly 18 sec. for the half-mile, equal to 100 miles an hour. At this time the travelling was so curiously smooth that, but for the sound, it was difficult to believe we were moving at all...

This sequence of eight quarter-mile timings is thought to start at milepost 173, the first after the tunnel, with the maximum speed at milepost 171.

Doubts over the record centred on the power of the locomotive and some contradictions in Rous-Marten's passing times. However, his milepost timings are consistent with a speed of 100 mph or just over. The latest research examines the evidence and uses computer simulation of the locomotive performance to show that a speed of 100 mph was possible and that the timings do indeed support such a speed.[6]

File:20130102 3440 graph.jpg
A comparison of a computer simulation of City of Truro's acceleration to 100mph with Charles Rous Marten's quarter-mile stopwatch timings.

This record was set before any car or aeroplane had attained such a speed. However, in May 1904 City of Truro was not the fastest vehicle in the world, as 130 mph (210 km/h) had been reached the previous year on an experimental electric railway near Berlin. An earlier, unconfirmed run of over 100 mph is recorded from 1893 in the USA, by New York Central and Hudson River Railroad 4-4-0 locomotive No. 999. This claim has little supporting evidence; for example, unlike City of Truro, there are no timings showing the acceleration up to 100 mph. Even some contemporary American technical journals doubted that such a high speed had been attained: "Many are disposed to receive with doubt the statement that on 9 May the locomotive No. 999 of the New York Central railroad ran at the speed of 100 miles an hour, or that on a subsequent date she ran a single mile in 32 seconds." [7] J P Pearson travelled on the Empire State express on 10 May 1893 and recorded a speed no higher than 81 mph, still a very respectable speed for the time.[8]

After the 1904 speed record, 3440 continued in everyday service until it was rendered obsolete in 1931, being withdrawn from service in March that year.[9] The historical significance of City of Truro led to the locomotive's survival after withdrawal from service, with the GWR's Chief Mechanical Engineer Charles Collett asking that the engine be preserved at the London and North Eastern Railway's Railway Museum at York when she was withdrawn in 1931, after the directors of the GWR had refused to preserve the engine at the company's expense.[citation needed] It was donated to the LNER, being sent from Swindon on 20 March 1931,[10] and was subsequently displayed at the new museum in York. During World War 2 York was considered to be a likely bombing target so the locomotive was evacuated to the small engine shed at Sprouston station (near Kelso) on the Tweedmouth to St Boswells line in the Scottish Borders. 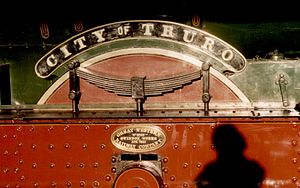 In 1957 City of Truro was returned to service by British Railways Western Region. The locomotive was based at Didcot, and was used both for hauling special excursion trains and for normal revenue services, usually on the Didcot, Newbury and Southampton line, and was renumbered back to 3440, and repainted into the ornate livery it carried at the time of its speed record in 1904. She was withdrawn for a second time in 1961. She was taken to Swindon's GWR Museum in 1962 where, renumbered back to 3717 and in plain green livery with black frames, she stayed until 1984, when she was restored for the GWR's 150th anniversary celebrations the following year. After that she returned to the National Railway Museum from where she was occasionally used on main line outings. She made a guest appearance in an exhibition called National Railway Museum on Tour which visited Swindon in 1990.

Her latest restoration to full working order was undertaken in 2004, at a cost of £130,000, to mark the 100th anniversary of her record-breaking run, and the loco has subsequently hauled several trains on UK main lines, although due to the lack of certain safety features she no longer operates on the main line.[citation needed]

City of Truro is now based semi-permanently at the Gloucestershire Warwickshire Railway, where she could often be seen hauling trains between Toddington and Cheltenham Racecourse. However she frequently left her Toddington base to visit other UK heritage railways.

In 2010 as part of the celebrations to mark the 175th anniversary of the founding of the GWR City of Truro was repainted and took up its 3717 guise once again. This is the first time it has carried an authentic livery for its current state whilst operating in preservation.[citation needed]

3717 was withdrawn from traffic at the Bodmin & Wenford Railway in early September 2011 with serious tube leaks,[11] and was moved to Shildon Locomotion Museum and placed on static display, and was back in service in 2012, but in early 2013 the NRM declared the locomotive was to be withdrawn ahead of its boiler ticket due to a hole being discovered in one of its tubes. The NRM did state that would repair the leaking tubes after they have restored 4472 Flying Scotsman, however after examination it was found that the loco required more work than first thought and is unlikely to be operational in the foreseeable future.

During its restoration in 1984, the locomotive was the subject of a 'spoof' by Steam Railway magazine. The engine was being restored on the Severn Valley Railway, and workshops foreman Alun Rees suggested to editor David Wilcock to repaint the driver's side of the locomotive in BR lined black as 3717. This took place, and several pictures of the engine as 3717 were taken on shed at Bridgnorth and in the Bridgnorth yard. It was almost discovered by John Coiley when he visited the railway that year, but Rees had the engine parked with its driver's side along the workshop's wall so it couldn't be seen. The images were released in 1985 with the note that 'proposals for a double chimney and high sided tender were narrowly defeated...' This subsequently upset many GWR enthusiasts; however, the engine never ran in this livery both in service or in preservation.[citation needed]

City of Truro featured as a character in the book Duck and the Diesel Engine, part of The Railway Series by the Rev. W. Awdry. The loco has also appeared in the television spin-off Thomas the Tank Engine and Friends, and was released as a diecast model in the Ertl range.

City of Truro starred in the 1957-8 serial "Will o'the Whistle" in the D.C.Thomson comic The Wizard, in which it was used by resistance fighters after the Kushanti invasion of Britain.

The erstwhile Kitmaster company produced an unpowered polystyrene injection moulded model kit for 00 gauge. In late 1962, the Kitmaster brand was sold by its parent company (Rosebud Dolls) to Airfix, who transferred the moulding tools to their own factory; they re-introduced some of the former Kitmaster range, including City of Truro. In time, the moulding tools passed on to Dapol who have also produced the model kit.[14]

In 2009, Bachmann produced in partnership with the National Railway Museum a highly detailed ready to run model of the locomotive. This model was available exclusively through the NRM's shop, and was available in City of Truro's earlier 3440 and later 3717 guises.[citation needed]

New York Central and Hudson River Railroad No. 999, another contender for the first steam locomotive to reach 100 mph.