Gābis), also spelt Cabès, Cabes, Kabes, Gabbs and Gaps, is the capital city of the Gabès Governorate, a province of Tunisia. It lies on the coast of the Gulf of Gabès. With a population of 152,921 (census 2014) it is the 6th largest Tunisian city.

Takapes, the ancient name of Gabes, is a Numidian-Berber name. Later, the prefix "Ta" (meaning "to" in Berber) was dropped, and the place became known as Kapes. As in Arabic the sound /p/ is unknown, Kapes became known as Kabes, and later known as Gabes.

Strabo refers to this city as an important entrepot of the Lesser Syrtis. Pliny (18.22) remarks that the waters of a copious fountain at Tacape were divided among the cultivators according to a system where each had the use of the water during a certain interval of time. The Tabula Peutingeriana shows Tacape between Marcomades and Sabratha.

Tacapae became a Christian bishopric that, no longer being a residential see, is included in the Catholic Church's list of titular sees.[4]

Three of its bishops are known:[5]

After the Roman and Christian period 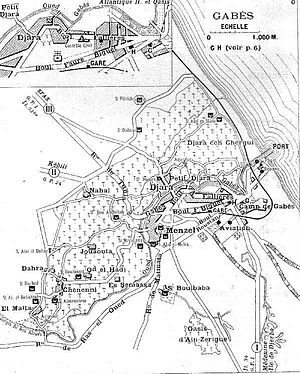 The fast-growing numbers of factories has resulted in fairly serious pollution of the area and of the Gulf of Gabès. In recent years the government is working on new programs and laws to decrease the amount of pollution.

Gabès – Matmata International Airport is in the city.

Gabès will soon be upgraded with one light rail system under the number 7 that will run from the railway station to the port of Gabès. Featuring rolling stock made by Alstom, Gabès will receive 15 new train sets.

Gabès is terminus of a narrow gauge 1,000 mm (3 ft 3 3⁄8 in) branch railway from the capital, and is the nearest railway station to the Libyan border at Ras Ajdir. Gabès has also one of the biggest ports in Tunisia; it is used usually to ship the mineral products from the city of Gafsa.

Gabès has a semi-arid climat, characterized by a hot and dry season and a cool and arid season.

Gabès is famous for its traditional Souqs in Jarah; it is known also for its attractive beach and the unusual seaside oasis (Gabès is located on the coast of the Mediterranean Sea). The best parts of the beach are in the south of the city (Road to Djerba). The best one is the Lemawa or Lemaya beach. The government is planning to build a tourist zone there in the coming years. Gabès has a unique feature in the world, in this city you find the mountain, the sea, the oasis and the desert. The streets of Gabès come alive at night during Ramadan, where sook's (shops) are open on the streets and parties happen almost everyday in the night during Ramadan. The most visited place in Gabès is the town Matmata.

This site was added to the UNESCO World Heritage Tentative List on May 28, 2008, in the Cultural category.[9]