From Infogalactic: the planetary knowledge core
Jump to: navigation, search
This article is about the architectural feature. For other uses, see Gable (disambiguation). 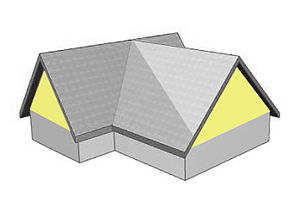 A single-story house with three gables, although only two can be seen (highlighted in yellow). This intersection of gables is a cross gable roof 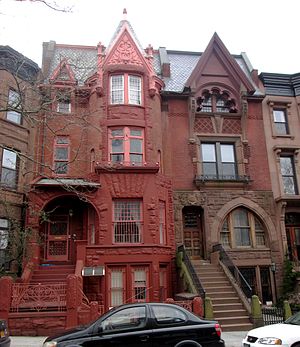 A gable is the generally triangular portion of a wall between the edges of intersecting roof pitches. The shape of the gable and how it is detailed depends on the structural system used, which reflects climate, material availability, and aesthetic concerns. A gable wall or gable end more commonly refers to the entire wall, including the gable and the wall below it.

A variation of the gable is a crow-stepped gable, which has a stairstep design to accomplish the sloping portion.

Gable ends of more recent buildings are often treated in the same way as the Classic pediment form. But unlike Classical structures, which operate through trabeation, the gable ends of many buildings are actually bearing-wall structures. Thus, the detailing can be ambiguous or misleading.[citation needed]

Gable style is also used in the design of fabric structures, with varying degree sloped roofs, dependent on how much snowfall is expected.

Sharp gable roofs are a characteristic of the Gothic and classical Greek styles of architecture.[1]

Front-gabled buildings are considered typical for German city streets in the medieval gothic period, while later Renaissance buildings, influenced by Italian architecture are often side-gabled. In America, front-gabled houses as the Gablefront house were popular primarily between the early 19th century and 1920. 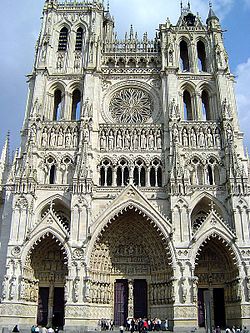 The cathedral in Amiens showing three portals with wimperg and pinnacles and rose window.

A wimperg is a German and Dutch word for a Gothic ornamental gable with tracery over windows or portals, which were often accompanied with pinnacles. [2] It was a typical element in Gothic Architecture especially in cathedral architecture. Wimpergs often had crockets or other decorative elements in the Gothic style. The intention behind the wimperg was the perception of increased height.