Gabriel Iván Heinze (Spanish pronunciation: [ˈeinse]; born 19 April 1978) is an Argentine former footballer who operated as either a left back or a central defender.[1]

Nicknamed Gringo ("Blonde" in Argentine-Spanish slang),[2][3] he made a name for himself at Paris Saint-Germain, moving in 2004 to Manchester United and subsequently to Real Madrid, winning four trophies with the latter two clubs. He started and finished his 18-year professional career with Newell's Old Boys.

Heinze played 72 times with Argentina, representing the nation at two World Cups and as many Copa América tournaments.

Heinze was born in Crespo, Entre Ríos to a Volga German father[4] and an Italian mother, thus holding both nationalities.[5][6] He began his career in his home country with Newell's Old Boys and, following attention from various European clubs, the 19-year-old signed for Real Valladolid in Spain, not managing one single La Liga appearance in his first season and also being loaned to Sporting Clube de Portugal in the 1998 summer.

After the 2000–01 campaign, where he appeared in 36 league games to help the Castile and León club narrowly avoid top flight relegation, Heinze moved to Paris Saint-Germain, where he amassed over 100 overall appearances in three years, helping the capital side to the 2004 French Cup.

In June 2004, Heinze joined Manchester United for a fee of £6.9 million.[5] He marked his debut for the club on 11 September with a goal in a 2–2 away draw against Bolton Wanderers,[7] and immediately established himself as United's first choice left back, being regularly lauded by United fans with the chant of "Ar-gen-tina!"[8] and eventually voted the club's best player for the 2004–05 season.

On 14 September 2005, Heinze was injured in a UEFA Champions League match with Villarreal and was ruled out of first-team action for the rest of the campaign. Previously, he had scored two goals in the same competition, the 3–0 second-leg qualifier away win over Debreceni.[9] He made a comeback with the reserve team in April 2006, but a minor injury picked up in his third game back prevented him from making a first-team appearance before the end of the campaign. The consequence of this injury was Manchester United's signing of Patrice Evra, who went on to become the club's first-choice left-back in the following years.

Heinze returned to action for United in 2006–07, and eventually won a place in the side back as a central defender, due to an injury crisis. After the team had sealed the Premier League title, he was named captain for the last two games of the season, away to Chelsea[10] and at home to West Ham United.

After becoming disillusioned with manager Alex Ferguson by his lack of regular first-team action,[11] Heinze demanded a transfer to Liverpool during the close season.[12] United rejected the bid, believed to be in the region of £6.8 million.[13] 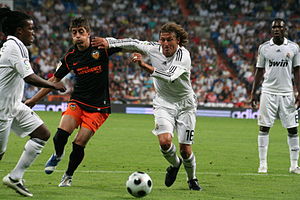 Heinze playing with Real Madrid against Valencia in 2009

On 22 August 2007, Heinze joined Real Madrid on a four-year deal, becoming the third United player to join the Spaniards (after David Beckham and Ruud van Nistelrooy), for a reported £8 million fee.[14] He made his debut on 2 September against Villarreal, coming on as a substitute for Raúl. On 30 March 2008 he netted his first goal for the Merengues, in a 3–1 home win against Sevilla, and finished his debut season with 20 league appearances as the club won the league.

In his second year with Real Madrid, Heinze was more regularly used, but the club came out empty in silverware, with the exception of the that year's Supercopa de España. 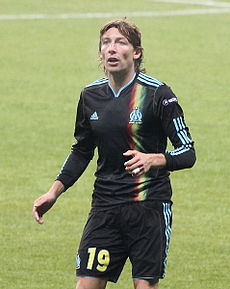 Heinze in action for Marseille

On 30 July 2009 Heinze joined Olympique de Marseille on a two-year deal, for an undisclosed fee, reuniting at the Ligue 1 club with countryman Lucho González.[15] In his first year he scored a career-best four league goals in 27 matches, as L'OM won both the national championship and the season's Coupe de la Ligue. On 27 March 2010 he was as starter as his team defeated Bordeaux in the latter competition's final, for Marseille's first major title since 1993;[16] on 5 May, he netted the opener in a 3–1 home win against Rennes, which clinched the league in favour of Marseille;[17] the club's manager Didier Deschamps later described the season's events as an "extraordinary human adventure".[18]

On 1 June 2011, it was announced on Marseille's website that 33-year-old Heinze would leave the club at the end of the season.[20]

On 22 July 2011, Heinze joined Serie A side A.S. Roma, after being released by Marseille at the end of June.[21] He made his official debut on 11 September, against Cagliari.

On 19 March 2012, after appearing in his 25th official game, Heinze had his contract automatically renewed for another year.[22] However, just five months later, it was announced on Roma's official website that he was being released from his contract with immediate effect;[23] the day after his release[24] he joined his original club, Newell's Old Boys, on a two-year deal.[25]

Even though he still did not possess the proper license, Heinze began working as a manager in June 2015, being appointed at Godoy Cruz in the Argentine Primera División.[26][27] However, he was sacked on 27 September 2015 following two wins, two draws and six defeats.[28]

Heinze first represented Argentina on 30 April 2003, in a friendly away win with Libya.[29] The following year, he won a gold medal in the 2004 Summer Olympics in Athens, scoring in a 6–0 group stage win against Serbia and Montenegro.[30]

Despite missing most of 2005–06 with Manchester United due to injury, Heinze was called up for the 2006 FIFA World Cup finals in Germany. In the quarter-final clash against the hosts, he started as Argentina lost on penalties.[31]

Heinze participated in the 2007 Copa América, scoring with his head from a Juan Román Riquelme free kick in the semifinals against Mexico, a 3–0 win for the eventual runners-up.[32] In the 2010 FIFA World Cup he played in four of Argentina's five matches in South Africa, netting the game's only goal – his third international – in a group stage win against Nigeria.[33]