Gabriele Tarquini (born 2 March 1962) is an Italian racing driver. He participated in 78 Formula One Grands Prix, debuting on May 3, 1987. He scored 1 championship point, and holds the record for the most failed attempts to qualify. He has subsequently raced successfully in Touring Cars, winning the BTCC in 1994, the ETCC in 2003 and the WTCC in 2009.

Tarquini began karting in 1976. By 1985 he was driving in Formula 3000, spending three seasons with underfunded outfits. His best result was 2nd at Imola in 1987, by which time he had already made his Grand Prix debut in a one-off drive for Osella at the 1987 San Marino Grand Prix.

He joined Coloni's Grand Prix team for 1988, having driven for them in F3000 in 1986. The season saw a prequalifying system being put in place as there were 31 entrants for a maximum 30 places in qualifying proper. As such, the slowest of the new entrants for the season (Coloni, Rial, Dallara and EuroBrun) would be eliminated from proceedings after the Friday morning session regardless of their overall position - Tarquini failed to prequalify several times despite often being faster than some of the exempt entrants (such as the Osella and Zakspeed cars). He drew good notices for his performance overall, however - his 8th place at the Canadian Grand Prix would stand as the team's best ever result and his eight starts the most ever garnered by a Coloni driver.

Tarquini signed to drive for the FIRST team (again a former employer in F3000) and drove for them at the Formula One Indoor Trophy, but when their car failed crash tests he started 1989 without a ride. Following Philippe Streiff's career-ending pre-season testing crash, Tarquini joined Joachim Winkelhock in the AGS team from the second round of the series. There he finished a fine 8th on the road, being promoted to 6th after the exclusion of Thierry Boutsen and Alex Caffi. He was then one of the stars of the weekend in Monaco, threatening to qualify in the top 6 before ending up 13th on the grid. In the race he advanced to a strong 4th before being sidelined by an electrical problem. At the following Mexican Grand Prix he finished 6th, though the team's joy was tempered after Williams and Scuderia Italia successfully appealed against their Imola disqualification and Tarquini lost his point. More bad luck followed at Phoenix where Tarquini was holding 6th despite technical problems before Boutsen passed him on the final lap. At the wet Canadian Grand Prix Tarquini again ran well until being shoved off the track by René Arnoux (who eventually went on to finish 5th). The series then moved to faster tracks where the AGS was less competitive and the results of others meant Tarquini's entry (exempt for the first half of the season thanks to Streiff's efforts in 1988) would have to prequalify for the second half of the season.

The expanding entry list meant prequalifying was much different to 1988, consisting of an hour-long free-for-all session on Friday morning between the less successful cars. Featuring the Larrousse cars of Michele Alboreto and Philippe Alliot, Roberto Moreno's Coloni, the Osellas of Nicola Larini and Piercarlo Ghinzani and the Onyx cars of Stefan Johansson and Bertrand Gachot among others with only the four fastest going through both Tarquini and new team-mate Yannick Dalmas struggled and Tarquini would not qualify again that year.

AGS attempted to move to larger premises for 1990 but a lack of resources and the late arrival of the JH25 left Tarquini and Dalmas again struggling to get past prequalifying, Tarquini only making it into four races (finishing just once - 13th in the Hungarian Grand Prix), his early 1989 form long forgotten by most. The team were under even more severe financial constraints for 1991, though they would initially at least avoid prequalifying. Tarquini made it through into three races, finishing a worthy 8th in the season opener at Phoenix but financial constraints meant after Monaco the AGS didn't make the grid again.

Late in the season the cash-strapped team sold his contract to Gabriele Rumi's ambitious Fondmetal outfit in time for the Spanish Grand Prix, soon forming a good relationship with the team. He was signed for a full year in 1992, showing some good speed in the neat but underdeveloped Fondmetal GR02 chassis. However, his car only finished once (14th at Silverstone, hindered by clutch problems) and despite some fine qualifying efforts (including outqualifying Ivan Capelli's Ferrari in Belgium) the team struggled to find funding, folding after the following Italian Grand Prix and leaving Tarquini out of a drive.

Despite being firmly involved in his successful touring cars career and 33 years old, Tarquini was signed up by Tyrrell for the 1995 season as their test driver thanks to the presence of Fondmetal as a sponsor. He replaced Ukyo Katayama for the European round as the Japanese driver was injured from his start line accident in the previous race. Out of practice with single seaters (having done very little actual testing due to the team's financial constraints) he finished 14th, six laps down on winner Michael Schumacher. It was his final Grand Prix.

Tarquini failed to pre-qualify on a record 25 occasions (out of a total of 40 failures to qualify), mainly because he was a regular in the pre-qualifying era, usually in cars which were so slow as to struggle to qualify. Despite this record many consider him to have been a talented driver stuck with uncompetitive machinery (much like contemporary Roberto Moreno).

He remained with Alfa Romeo as the ETCC became the World Touring Car Championship (WTCC) in 2005. He finished seventh overall, with two victories. 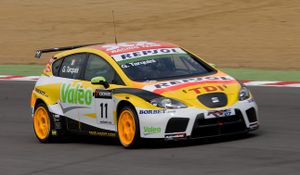 Tarquini driving the SEAT Léon at Brands Hatch in the 2008 WTCC season.

In November 2005, Tarquini was confirmed as one of six drivers at SEAT Sport for 2006.[4] He finished fifth in the championship that year with one win. He finished 8th in the standings in 2007, once again winning just one race. 2008 saw considerable improvement for Tarquini as he finished runner-up in the championship to Yvan Muller winning three races. His biggest success of his career came in 2009 when he won the WTCC championship at the last race of the year in Macau. 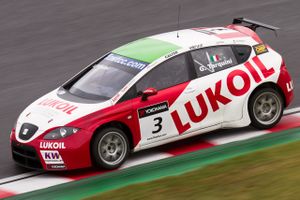 Tarquini driving for Lukoil-SUNRED at Suzuka in the 2011 WTCC season.

SEAT withdrew from the WTCC for 2010, but provided funding to introduce the new semi-works SR-Sport team, with whom Tarquini attempted to retain his crown. He scored five wins during the season to finish runner-up to ex-SEAT Sport teammate Yvan Muller in the drivers standings. This was after four victories, plus an inherited victory in Belgium from Jordi Gene after Gene's disqualifacation. His crash in Japan race two ended his title hopes.

In 2011, Tarquini drove for the Lukoil-SUNRED team alongside Aleksei Dudukalo.[5] He started the year with the SEAT 2.0 TDI engine but switched to the SUNRED 1.6T for Brno onwards.[6] He finished the season 5th in the standings with just one win in a year dominated by the Chevrolet RML team.

In January 2012 it was confirmed that Tarquini would drive for Lukoil Racing in a SEAT León powered by the new SEAT Sport turbocharged engine.[7] His team mate will once again be Aleksei Dudukalo. He started from pole position at the first race of the season in Italy but finished third behind Yvan Muller and Rob Huff in race one, he retired from the second race. Contact with Huff in race two in Portugal left him 19th with damage although no penalties were applied.[8] 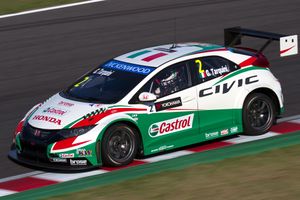 In July 2012, it was confirmed that Tarquini would drive a factory supported Honda Civic run by the returning JAS Motorsport team, alongside Tiago Monteiro in 2013.[9] He qualified fifth for the season opening Race of Italy but was given a five–place grid penalty for race one having tapped René Münnich into a spin during qualifying.[10] He finished race one in fourth and race two in third. He gave the Honda team its first pole position in the WTCC at the Race of Morocco.[11] He finished second in race one but retired from race two when he lost control over one of the kerbs and collided with Alex MacDowall.[12]

†Did not finish the race, but was classified as he completed over 90% of the race distance.