Gaelic type (sometimes called Irish character, Irish type, or Gaelic script) is a family of insular typefaces devised for printing Irish. It was widely used from the 16th until the mid-20th centuries but is today rarely used. Sometimes all Gaelic typefaces are called Celtic or uncial, though most Gaelic types are not uncials. The "Anglo-Saxon" types of the 17th century are included in this category because both the Anglo-Saxon types and the Gaelic/Irish types derive from the Insular manuscript hand. 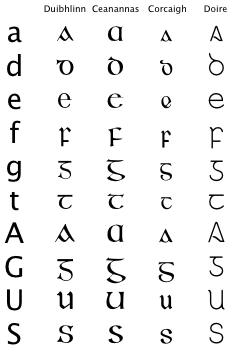 Overview of some Gaelic typefaces

Gaelic typefaces also often include insular forms ⟨ꞃ ꞅ⟩ of the letters ⟨r⟩ and ⟨s⟩, and some of them contain a number of ligatures used in earlier Gaelic typography and deriving from the manuscript tradition. Lower-case ⟨i⟩ is drawn without a dot (though it is not the Turkish dotless ⟨ı⟩), and the letters ⟨d f g t⟩ have insular shapes ⟨ꝺ ꝼ ᵹ ꞇ⟩.

Many modern Gaelic typefaces include Gaelic letterforms for the letters ⟨j k q v w x y z⟩, and typically provide support for at least the vowels of the other Celtic languages. They also distinguish between ⟨&⟩ and ⟨⁊⟩ (as did traditional typography), though some modern fonts replace the ampersand with the Tironian note ostensibly because both mean 'and'.

The word "Corcaigh" in the Gaelic-script font of the same name.

The Irish uncial alphabet originated in medieval manuscripts as an "insular" variant of the Latin alphabet. The first Gaelic typeface was designed in 1571 for a catechism commissioned by Elizabeth I to help convert the Irish Roman Catholic population to Anglicanism.

Typesetting in Gaelic script remained common in Ireland until the mid-20th century. Gaelic script is today used merely for decorative typesetting; for example, a number of traditional Irish newspapers still print their name in Gaelic script on the first page, and it is also popular for pub signs, greeting cards, and display advertising. Edward Lhuyd's grammar of the Cornish language used Gaelic-script consonants to indicate sounds like [ð] and [θ].

In 1996 Raidió Teilifís Éireann (RTÉ) created a new corporate logo. The logo consists of a modern take on the Gaelic type face. The R's counter is large with a short tail, the T is roman script while the E is curved but does not have a counter like a lower case E, and the letters also have slight serifs to them. TG4's original logo, under the brand TnaG, also used a modernization of the font, the use of the curved T and a sans-serif A in the word "na". Other Irish companies that have used Gaelic script in their logos including the GAA, Telecom Éireann and An Post. The Garda Síochána uses Gaelic Script on its official seal.

The GAA logo uses the script to incorporate both the English language GAA acronym and the Irish language CLG acronym. The logo more strongly shows the more widely used acronym GAA but taking a closer look a C joins with an L and then to a G lying down.

Unicode treats the Gaelic script as a font variant of the Latin alphabet. A lowercase insular g (ᵹ) was added in version 4.1 as part of the Phonetic Extensions block because of its use in Irish linguistics as a phonetic character for [ɣ]. Unicode 5.1 (2008) further added a capital G (Ᵹ) and both capital and lowercase letters D, F, R, S, T, besides "turned insular G", on the basis that Edward Lhuyd used these letters in his 1707 work Archaeologia Britannica as a scientific orthography for Cornish.