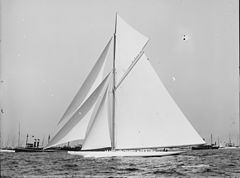 Reliance, a competitor in the 1903 America's Cup and the largest Gaff rigged cutter ever built 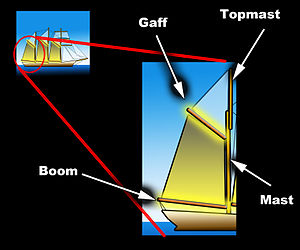 A gaff rigged sail and its surrounding spars 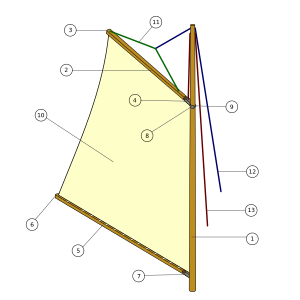 Gaff rig[1] is a sailing rig (configuration of sails, mast and stays) in which the sail is four-cornered, fore-and-aft rigged, controlled at its peak and, usually, its entire head by a spar (pole) called the gaff. Because the size and shape of the sail, a gaff rig will have running backstays rather than permanent backstays.

The gaff enables a fore and aft sail to be four sided, rather than triangular. A gaff rig typically carries 25 percent more sail than an equivalent bermudian rig for a given hull design.[2]

A sail hoisted from a gaff is called a gaff-rigged (or, less commonly, gaff rigged or gaffrigged) sail.[3]

Gaff rig remains the most popular fore-aft rig for schooner and barquentine mainsails[citation needed] and other course sails, and spanker sails on a square rigged vessel are always gaff rigged. On other rigs, particularly the sloop, ketch and yawl, gaff rigged sails were once common but have now been largely replaced by the Bermuda rig sail,[4] which, in addition to being simpler than the gaff rig, usually allows vessels to sail closer to the direction from which the wind is blowing (i.e. "closer to the wind").[citation needed]

The gaff is hoisted by two halyards:

Halyards (and edges) on a gaff rigged sail 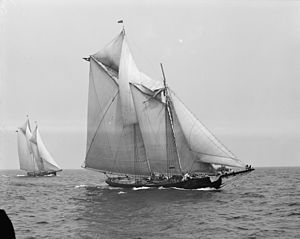 Additionally, a gaff vang may be fitted. It is a line attached to the end of the gaff which prevents the gaff from sagging downwind. Gaff vangs are difficult to rig on the aft-most sail, so are typically only found on schooners or ketches, and then only on the foresail or mainsail.[citation needed]

A triangular fore-and-aft sail called a jib-headed topsail may be carried between the gaff and the mast.[7]

Gunter-rigged boats are similar, smaller vessels on which a spar popularly but incorrectly called the gaff is raised until it is nearly vertical, parallel to the mast and close adjacent to it. Topsails are never carried on gunter rigs.

The Spritsail is another rig with a four-sided fore-aft sail. Unlike the gaff rig where the head hangs from a spar along its edge, this rig supports the leech of the sail by means of a spar named a sprit. The forward end of the sprit is attached to the mast but bisects the face of the sail, with the after end of the sprit attaching to the peak and/or the clew of the sail.

For a given sail area a gaff rig has a shorter mast than a bermudian rig. In short-ended craft with full body, heavy displacement and moderate ballast ratio, it is difficult to set enough sail area in the bermudian rig without a mast of excessive height and a center of effort (CE) too high for the limited stability of the hull.[8] Because of its low aspect ratio, the gaff rig is less prone to stalling if oversheeted than something taller and narrower.[9]

Whilst reaching, the CE being set further back, will encourage a small craft to bear up into the wind, i.e. strong weather helm. The boat builder can compensate for this at design stage, e.g. by shifting the keel slightly aft, or having two jibs to counter the effect. The Gaff-Cutter is in fact a very popular sailplan for small craft.[citation needed] The helmsman can reduce weather helm significantly, simply by sheeting out the mainsail. Sheeting out may appear to create an inefficient belly in the sail, but it is often a pragmatic alternative to having a heavy helm. A swing keel lifted halfway is the perfect treatment for weather helm on a gaffer.[citation needed] The usual adjustments to mast rake, or even bowsprit length may be made to a gaffer with persistent heavy weather (or lee) helm.

On a gaff-rigged vessel, any heading where the wind is within 20 degrees of dead aft is considered a run.[10] When Running with a gaff-rig, the CE of the mainsail may actually be overboard of the hull, in a stiff wind the craft may want to broach. Running goose winged with a balloon staysail poled out to windward will balance the CE; Nick Skeates circumnavigated Wylo II with this configuration.[11] In light winds, or when racing, a watersail may also be set.