According to some theories, the Gagauz people descend from the Seljuq Turks who settled in Dobruja following the Anatolian Seljuq Sultan Izzeddin Keykavus II (1236–1276). They may be descended from Pechenegs, Uz (Oghuz) and Cuman (Kipchak) peoples.

More specifically, one clan of Oghuz Turks is known to have migrated to the Balkans during intertribal conflicts with other Turks. This Oghuz Turk clan converted from Islam to Orthodox Christianity after settling in the Eastern Balkans (in Bulgaria) and were called Gagauz Turks.[citation needed] A large group of the Gagauz later left Bulgaria and settled in southern Bessarabia, along with a group of ethnic Bulgarians.

According to other theories, Gagauz are descendants of linguistically Turkified Kutrigur Bulgarians.[1] In the official Gagauz museum, a plaque mentions that one of the two main theories is that they descend from the Bulgars.

In 1812, Bessarabia, previously the eastern half of the Principality of Moldavia, was annexed by the Russian Empire following the defeat of the Ottoman Empire in the Russo-Turkish War between 1806 and 1812 (see Treaty of Bucharest (1812)). Nogai tribes who inhabited several villages in south Bessarabia (or Budjak) were forced to leave. Between 1812 and 1846, the Russians relocated the Gagauz people from what is today eastern Bulgaria (which was then under the Ottoman Empire) to the orthodox Bessarabia, mainly in the settlements vacated by the Nogai tribes. They settled there together with Bessarabian Bulgarians in Avdarma, Comrat, Congaz, Tomai, Cișmichioi, and other former Nogai villages. Some Gagauz were also settled in the part of the Principality of Moldavia that did not come under Russian control in 1812. But, within several years, villagers moved to live with their own people in the compact area descendants inhabit in the 21st century in the south of Bessarabia.

Gagauz nationalism remained an intellectual movement during the 1980s, but strengthened by the end of the decade, as the Soviet Union began to embrace democratic ideals. In 1988, activists from the local intelligentsia aligned with other ethnic minorities to create a movement known as the "Gagauz People". A year later, the "Gagauz People" held its first assembly; they passed a resolution demanding the creation an autonomous territory in southern Moldova, with the city of Comrat as its capital.

The Gagauzian national movement intensified when Romanian was accepted as the official language of the Republic of Moldova in August 1989, replacing Russian, the official language of the USSR. A part of the multiethnic population of southern Moldova was concerned about the change in official languages. They had a lack of confidence in the central government in Chișinău. The Gagauz were also worried about the implications for them if Moldova reunited with Romania, as seemed likely at the time. In August 1990, Comrat declared itself an autonomous republic, but the Moldovan government annulled the declaration as unconstitutional. At that time, Stepan Topal emerged as the leader of the Gagauz national movement. 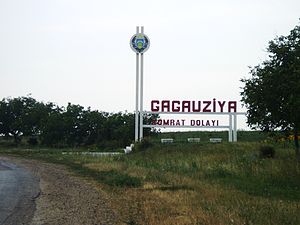 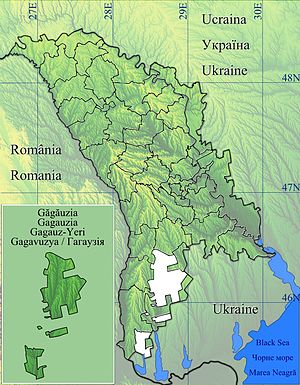 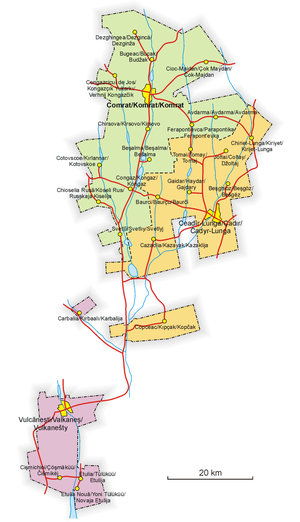 Support for the Soviet Union remained high in Gagauzia, with a referendum in March 1991 returning an almost unanimous vote in favour of remaining part of the USSR. Many Gagauz supported the Moscow coup attempt in August 1991, and Gagauzia declared itself independent on 19 August 1991. In September Transnistria declared its independence, thus further straining relations with the government of Moldova. But, when the Moldovan parliament voted on independence on 27 August 1991, six of the 12 Gagauz deputies in the Moldovan parliament voted in favour, while the other six abstained. The Moldovan government began to pay more attention to minority rights.[citation needed]

In February 1994, President Mircea Snegur promised autonomy to the Gagauz, but opposed independence. He was also opposed to the suggestion that Moldova become a federal state made up of three republics: Moldova, Gagauzia, and Transnistria.

In 1994, the Parliament of Moldova awarded to "the people of Gagauzia" (through the adoption of the new Constitution of Moldova) the right of "external self-determination". On 23 December 1994, the Parliament of the Republic of Moldova accepted the "Law on the Special Legal Status of Gagauzia" (Gagauz: Gagauz Yeri), resolving the dispute peacefully. This date is now a Gagauz holiday. Gagauzia is now a "national-territorial autonomous unit" with three official languages: Romanian, Gagauz, and Russian.

Three cities and 23 communes were included in the Autonomous Gagauz Territory: all localities with more than 50% ethnic Gagauz in population, and those localities with between 40% and 50% Gagauz which expressed their desire by referendum to be included to determine Gagauzia's borders. In 1995, Georgi Tabunshik was elected to serve as the Governor (Romanian: Guvernator, Gagauz: Başkan) of Gagauzia for a four-year term, as were the deputies of the local parliament, "The People's Assembly" (Gagauz: "Halk Topluşu"), with Petr Pashali as chairman.

Dmitrii Croitor won the 1999 governor elections and began to assert the rights granted to the governor by the 1994 agreement. The central authorities of Moldova proved unwilling to accept the results, initiating a lengthy stand-off between the autonomy and Chișinău. Finally Croitor resigned in 2002 due to the pressure from the Moldovan government, which accused him of abuse of authority, relations with the separatist authorities of Transnistria and other charges.

The central electoral commission of Gagauzia did not register Croitor as a candidate for the post of the Governor in the subsequent elections, and Gheorgi Tabunshik was elected in what was described as unfair elections.[2][3] Mihail Formuzal served as the Governor of Gagauzia from 2006 until 2015. That year Irina Vlah was elected to the position, with 51% of the vote.[4]

On 2 February 2014, Gagauzia held a referendum. An overwhelming majority of voters opted for closer ties with Russia over EU integration. They also said they preferred the independence of Gagauzia if Moldova chooses to enter the EU.[5][6]

On 23 March 2015, Irina Vlah was elected as the new governor after a strongly pro-Russian campaign, dominated by the quest for closer ties with the Russian Federation.[7][8]

Gagauzia is divided into three districts. It also is split into four enclaves. The main, central enclave includes the cities Comrat and Ceadîr-Lunga and is divided into two districts with those cities serving as administrative centers. The second largest enclave is located around the city of Vulcănești, while two smaller enclaves are the villages of Copceac and Carbalia. The village of Carbalia falls under administration of Vulcănești, while Copceac is part of the Ceadir-Lunga district.

Gagauzia consists of one municipality, two cities, and 23 communes containing a total of 32 localities.[9]

The autonomy of Gagauzia is guaranteed by the Moldovan constitution and regulated by the 1994 Gagauz Autonomy Act. If Moldova decided to unite with Romania, Gagauzia would have the right of self-determination.[10][11] The Gagauzian People's Assembly (Gagauz: Halk Topluşu; Romanian: Adunarea Populară) has a mandate for lawmaking powers within its own jurisdiction. This includes laws on education, culture, local development, budgetary and taxation issues, social security, and questions of territorial administration. The People's Assembly also has two special powers: it may participate in the formulation of Moldova's internal and foreign policy; and, should central regulations interfere with the jurisdiction of Gagauz-Yeri, it has the right of appeal to Moldova's Constitutional Court.

The highest official of Gagauzia, who heads the executive power structure, is the Governor of Gagauzia (Gagauz: Başkan;Romanian: Guvernatorul Găgăuziei). She/he is elected by popular suffrage for a four-year term, and has power over all public administrative bodies of Gagauzia. She/he is also a member of the Government of the Republic of Moldova. Eligibility for governorship requires fluency in the Gagauz language, Moldovan citizenship, and a minimum age of 35 years.

Permanent executive power in Gagauz Yeri is exercised by the Executive Committee (Bakannik Komiteti/Comitetul Executiv). Its members are appointed by the Governor, or by a simple majority vote in the Assembly at its first session. The Committee ensures the application of the laws of the Republic of Moldova and those of the Assembly of Gagauz-Yeri.

As part of its autonomy, Gagauzia has its own police force.[12]

There are 451 kilometers of roads in Gagauzia, of which 82% are paved. Turkey loaned Moldova USD$35 million to improve Gagauzia's road network.[citation needed]

According to the 2004 census results, the ethnic breakdown in Gagauzia was:[13]

There is an ongoing identity controversy over whether Romanians and Moldovans are the same ethnic group. At the census, every citizen could only declare one nationality; consequently, one could not declare oneself both Moldovan and Romanian. The combined figure for Moldovans (Romanians) is 7,519 (4.85%).

Despite declaring Gagauz as the national language of the Autonomy, the local authorities do not provide any full Gagauz-teaching school, most of those are Russian-language as opposed to inner Moldovan full Romanian language education.[15] Although pupils are introduced to all of the usual school languages (Russian, Romanian, English or French, Gagauz), the local language continues to be least popular.[16]