Gaia is a space observatory of the European Space Agency (ESA) designed for astrometry.[6][7] The mission aims to construct a 3D space catalog of approximately 1 billion astronomical objects, mainly stars[8][9] (approximately 1% of the Milky Way population)[10] brighter than 20 G magnitude, where G is the Gaia magnitude passband between about 400 and 1000 nanometres light wavelengths.[11] Additionally Gaia is expected to detect thousands to tens of thousands of Jupiter-sized planets beyond the Solar System,[12] 500,000 quasars and tens of thousands of new asteroids and comets within the Solar System.[13][14][15] The spacecraft will monitor each of its target stars about 70 times over a period of five years.

Gaia will create a precise three-dimensional map of astronomical objects throughout the Milky Way and map their motions, which encode the origin and subsequent evolution of the Milky Way. The spectrophotometric measurements will provide the detailed physical properties of all stars observed, characterizing their luminosity, effective temperature, gravity and elemental composition. This massive stellar census will provide the basic observational data to tackle a wide range of important questions related to the origin, structure, and evolutionary history of our galaxy.

Successor to the Hipparcos mission, the telescope is part of ESA's Horizon 2000+ long-term scientific program. Gaia was launched on 19 December 2013 by Arianespace using a Soyuz ST-B/Fregat-MT rocket flying from Kourou in French Guiana.[16][17] The spacecraft currently operates in a Lissajous orbit around the Sun–Earth L2 Lagrangian point.

The Gaia space telescope has its roots in ESA's Hipparcos mission (1989–1993). Its mission was proposed in October 1993 by Lennart Lindegren (Lund University, Sweden) and Michael Perryman (ESA) in response to a call for proposals for ESA's Horizon Plus long-term scientific programme. It was adopted by ESA's Science Programme Committee as cornerstone mission number 6 on 13 October 2000, and the B2 phase of the project was authorised on 9 February 2006, with EADS Astrium taking responsibility for the hardware. The name "Gaia" was originally derived as an acronym for Global Astrometric Interferometer for Astrophysics. This reflected the optical technique of interferometry that was originally planned for use on the spacecraft. While the working method evolved during studies and the acronym is no longer applicable, the name Gaia remained to provide continuity with the project.[18]

The total cost of the mission is around €740 million (~ $1 billion), including the manufacture, launch and ground operations.[19] Gaia was completed two years behind schedule and 16% above its initial budget, mostly due to the difficulties encountered in polishing Gaia's ten mirrors and assembling and testing the focal plane camera system, as well as other issues.[20]

The Gaia space mission has the following objectives:

In order to achieve these objectives, Gaia has these goals:

Gaia was launched by Arianespace, using a Soyuz ST-B rocket with a Fregat-MT upper stage, from the Ensemble de Lancement Soyouz at Kourou in French Guiana on 19 December 2013 at 09:12 UTC (06:12 local time). The satellite separated from the rocket's upper stage 43 minutes after launch at 09:54 UTC.[28][29] The craft headed towards the Sun–Earth Lagrange point L2 located approximately 1.5 million kilometres from Earth, arriving there 8 January 2014.[30] The L2 point provides the spacecraft with a very stable gravitational and thermal environment. There it uses a Lissajous orbit that avoids blockage of the Sun by the Earth, which would limit the amount of solar energy the satellite could produce through its solar panels, as well as disturb the spacecraft's thermal equilibrium. After launch, a 10-metre diameter sunshade was deployed. The sunshade always faces the Sun, thus keeping all telescope components cool and powering Gaia using solar panels on its surface.

In order to maintain the fine pointing to focus on stars many light years away, there are almost no moving parts. The spacecraft subsystems are mounted on a rigid silicon carbide frame, which provides a stable structure that will not expand or contract due to heat. Attitude control is provided by small cold gas thrusters that can output 1.5 micrograms of nitrogen per second.

The telemetric link with the satellite is about 3 Mbit/s on average, while the total content of the focal plane represents several Gbit/s. Therefore only a few dozen pixels around each object can be downlinked. 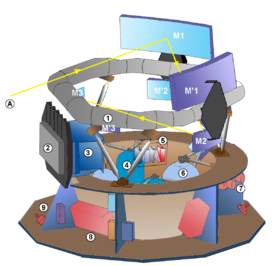 (A) Light path of telescope 1 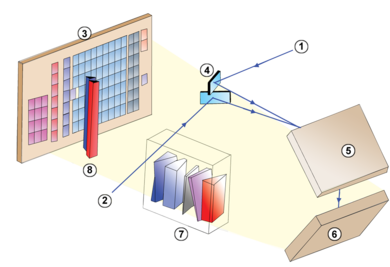 Design of the focal plane and instruments

The design of the Gaia focal plane and instruments. Due to the spacecraft's rotation, images cross the focal place array right-to-left at 60 arc seconds per second.[33] 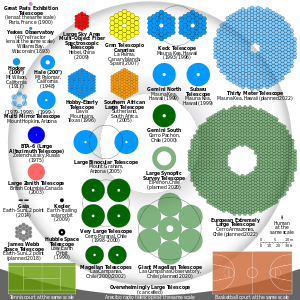 Despite its name, Gaia does not actually use interferometry to determine the positions of stars. At the time of the original design, interferometry seemed the best way to achieve the target resolution, but the design later evolved into an imaging telescope. Similar to its predecessor Hipparcos, but with a precision one hundred times better, Gaia consists of two telescopes providing two observing directions with a fixed, wide angle of 106.5° between them.[34] The spacecraft rotates continuously around an axis perpendicular to the two telescopes' lines of sight. The spin axis in turn has a slight precession across the sky, while maintaining the same angle to the Sun. By precisely measuring the relative positions of objects from both observing directions, a rigid system of reference is obtained.

The two key telescope properties are:

Each celestial object will be observed on average about 70 times during the mission, which is expected to last five years. These measurements will help determine the astrometric parameters of stars: two corresponding to the angular position of a given star on the sky, two for the derivatives of the star's position over time (motion) and lastly, the star's parallax from which distance can be calculated. The radial velocity of the brighter stars is measured by an integrated spectrometer observing the Doppler effect. Because of the physical constraints imposed by the Soyuz spacecraft, Gaia's focal arrays could not be equipped with optimal radiation shielding, and ESA expects their performance to suffer somewhat toward the end of the five year mission. Ground tests of the CCDs while they were subjected to radiation provided reassurance that the primary mission's objectives can be met.

The expected accuracies of the final catalogue data have been calculated following in-orbit testing, taking into account the issues of stray light, degradation of the optics, and the basic angle instability. The best accuracies for parallax, position, and proper motion are obtained for the brighter observed stars, apparent magnitudes 3-12. The standard deviation for these stars is expected to be 6.7 micro-arc seconds or better. For fainter stars, error levels increase, reaching 26.6 micro-arc seconds error in the parallax for 15th magnitude stars, and several hundred micro-arc seconds for 20th magnitude stars.[38] For comparison, the best parallax error levels from the new Hipparcos reduction are no better than 100 micro-arc seconds, with typical levels several times larger.[39] 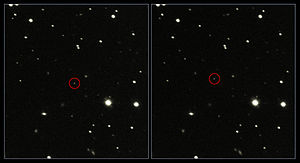 The overall data volume that will be retrieved from the spacecraft during the five-year mission assuming a nominal compressed data rate of 1 Mbit/s is approximately 60 TB, amounting to about 200 TB of usable uncompressed data on the ground, stored in the InterSystems Caché database. The responsibility of the data processing, partly funded by ESA, has been entrusted to a European consortium (the Data Processing and Analysis Consortium, or DPAC) which has been selected after its proposal to the ESA Announcement of Opportunity released in November 2006. DPAC's funding is provided by the participating countries and has been secured until the production of Gaia's final catalogue scheduled for 2020.

Gaia will send back data for about eight hours every day at about 5 Mbit/s. ESA's two most sensitive ground stations, the 35 m diameter radio dishes in Cebreros, Spain, and New Norcia, Australia, will receive the data.[18] 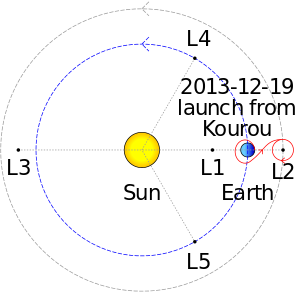 Simplified illustration of Gaia's trajectory and orbit (not to scale)

In October 2013 ESA had to postpone Gaia's original launch date, due to a precautionary replacement of two of Gaia's transponders. These are used to generate timing signals for the downlink of science data. A problem with an identical transponder on a satellite already in orbit motivated their replacement and reverification once incorporated into Gaia. The rescheduled launch window was from 17 December 2013 to 5 January 2014, with Gaia slated for launch on 19 December.[41]

The ephemeris of Gaia satellite and the field of view map can be computed with the help of the public dedicated web-interface Gaiainthesky [44] for any location on Earth.

Testing and calibration phase, started while Gaia was en route to SEL2 point, continued until the end of July 2014,[45] three months behind schedule due to unforeseen issues with ice deposits and stray light entering the detector.

In 2015 an object was discovered orbiting the Earth and designated by the Minor Planet Center as object 2015 HP116. It was soon found to be an accidental rediscovery of the Gaia spacecraft and the designation was retracted.

Shortly after launch, ESA revealed that Gaia was suffering from a stray light problem. The problem was initially thought to be due to ice deposits causing some of the light diffracted around the edges of the sunshield and entering the telescope apertures to be reflected towards the focal plane.[46] The source of the stray light was later identified as the fibers of the sunshield, protruding beyond the edges of the shield.[47] This results in a "degradation in science performance [which] will be relatively modest and mostly restricted to the faintest of Gaia's one billion stars." Mitigation schemes are being implemented to optimise the mission performance. The degradation is more severe for the RVS spectrograph than for the astrometry measurements.

On September 12, 2014, Gaia discovered its first supernova in another galaxy.[48] On July 3, 2015, a map of the Milky Way by star density was released, based on data from the spacecraft.[49] It is planned that a first catalog of the results of Gaia's observations will be released in 2016. For most stars this first catalog will not contain parallaxes, as it will still be based on too few observations to decouple those from the proper motion. 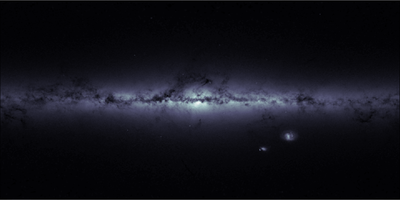 A map of the sky by star density.