11 RTS routes operate on the University of Florida (UF) campus. These include "park and ride" and circulator routes. UF and Santa Fe College (SF) students have prepaid unlimited access to RTS services through a transportation fee attached to each credit hour for undergraduates. UF faculty, staff, spouses and retirees have unlimited prepaid access through the RTS Employee Bus Pass Program, as do SF faculty, staff and students.

Gator Aider is a shuttle service provided to transport fans to and from University of Florida Gators home football games. Service is available at five park-n-ride locations around the Greater Gainesville area including the Town of Tioga, the Oaks Mall, Haile Plantation, the UF Hilton Conference Center and the City of Gainesville Downtown Parking Garage. Cost is $50 for a season pass and $10 for a single game round-trip ticket. Service begins three (3) hours prior to kickoff, with the last bus departing ten (10) minutes before kickoff. Return buses start at the fourth quarter and run throughout the first hour after the game ends.

Buses are now equipped with GPS, so riders can see if their bus is running on time.[4] 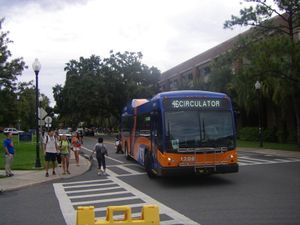 RTS currently operates a fleet of 127 buses, some of which date back to the late-1990s. All RTS buses are equipped with bicycle racks and wheelchair lifts. While many were purchased new, others were acquired second-hand from other operators in the state, including 10 that were acquired from Lynx and 11 from Palm Tran. RTS acquired five new Gillig hybrid electric buses (two in early 2012 and three more in 2013). Buses in the current fleet include:[5]