From Infogalactic: the planetary knowledge core
(Redirected from Gaiseric)
Jump to: navigation, search

Genseric or more often Gaiseric or sometimes Geiseric (c. 389 – January 25, 477), was King of the Vandals and Alans (428–477) who established the Vandal Kingdom was one of the key players in the troubles of the Western Roman Empire in the 5th century. During his nearly 50 years of rule, he raised a relatively insignificant Germanic tribe to the status of a major Mediterranean power — which, after he died, entered a swift decline and eventual collapse.

Succeeding his brother Gunderic at a time when the Vandals were settled in Baetica (modern Andalusia, Spain), Gaiseric successfully defended himself against a Suebian attack and transported all his people, around 80,000, to Northern Africa in 428. He might have been invited by the Roman governor Bonifacius, who wished to use the military strength of the Vandals in his struggle against the imperial government.

Gaiseric caused great devastation as he moved eastward from the Strait of Gibraltar across Africa. He turned on Bonifacius, defeated his army in 430, and then crushed the joint forces of the Eastern and Western empires that had been sent against him. In 435 Gaiseric concluded a treaty with the Romans under which the Vandals retained Mauretania and part of Numidia as federates (allies under special treaty) of Rome. In a surprise move on October 19, 439, Gaiseric captured Carthage, striking a devastating blow at imperial power. In a 442 treaty with Rome the Vandals were recognized as the independent rulers of Byzacena, and part of Numidia. Gaiseric’s fleet soon came to control much of the western Mediterranean, and he annexed the Balearic Islands, Sardinia, Corsica, Malta and Sicily.

His most famous exploit, however, was the capture and plundering of Rome in June 455. Subsequently the King defeated two major efforts of the Romans to overthrow him, that of the emperor Majorian in 460, and that led by Basiliscus at the Battle of Cape Bon in 468. After dying in Carthage at the great age of 88, Gaiseric was succeeded by his son Huneric.

Genseric was an illegitimate son of King Godigisel; he is assumed to have been born near Lake Balaton (Hungary) around 389.[citation needed] After his father's death in battle against the Franks during the Crossing of the Rhine 406 AD, Genseric became the second most powerful man among the Vandals, after the new king, his half-brother Gunderic.

After Gunderic's death in 428, Genseric was elected king. He immediately began to seek ways of increasing the power and wealth of his people, who then resided in the Roman province of Hispania Baetica in southern Hispania. The Vandals had suffered greatly from attacks from the more numerous Visigoths, and not long after taking power, Genseric decided to leave Hispania to this rival Germanic tribe. In fact, he seems to have started building a Vandal fleet even before he became king. In 428 Genseric was attacked from the rear by a large force of Suebi under the command of Heremigarius who had managed to take Lusitania.[1] This Suebi army was defeated near Mérida and its leader Hermigario drowned in the Guadiana River while trying to flee.[1] 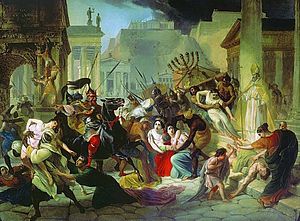 Taking advantage of a dispute between Boniface, Roman governor of North Africa, and Aetius, Genseric ferried all 80,000 [This number is according to Procopius in his 'History of the Vandalic Wars', however after much scholarly debate, it has been decided that this was a large exaggeration on the part of Procopius, and is now said to probably be closer to 20,000 see [2] and [3] for further details] of his people across to Africa in 429. Once there, he won many battles over the weak and divided Roman defenders and quickly overran the territory now comprising modern Morocco and northern Algeria. His Vandal army laid siege to the city of Hippo Regius (where Augustine had recently been bishop — he died during the siege), taking it after 14 months of bitter fighting. A peace between Gaiseric and the Roman Emperor Valentinian III was concluded 11 February 435, and in return for recognizing Genseric as king of the lands he and his men had conquered the Vandals would desist from attacks on Carthage, pay a tribute to the Empire, and send his son Huneric as a hostage to Rome.[4]

On October 19 439, noting that the forces of the Western Empire were heavily involved in Gaul, Geiseric took possession of Carthage, probably through some treachery. Stewart Oost observes, "Thus he undoubtedly achieved what had been his purpose since he first crossed to Africa."[5] The Romans were caught unaware, and Genseric captured a large part of the western Roman navy docked in the port of Carthage. The Catholic bishop of the city, Quodvultdeus, was exiled to Naples, since Genseric demanded that all his close advisors follow the Arian form of Christianity. Nevertheless, Genseric gave freedom of religion to the Catholics, while insisting that the regime's elite follow Arianism. The common folk had low taxes under his reign, as most of the tax pressure was on the rich Roman families and the Catholic clergy.

Added to his own burgeoning fleet, the Kingdom of the Vandals now threatened the Empire for mastery of the western Mediterranean Sea. Carthage, meanwhile, became the new Vandal capital and an enemy of Rome for the first time since the Punic Wars.

With the help of their fleet, the Vandals soon subdued Sicily, Sardinia, Corsica and the Balearic Islands. Genseric strengthened the Vandal defenses and fleet and regulated the positions of Arians and Catholics. In 442, the Romans acknowledged the Carthaginian conquests, and recognized the Vandal kingdom as an independent country rather than subsidiary to Roman rule. The area in Algeria that had remained for the larger part independent of the Vandals turned from a Roman province into an ally.

For the next 30 years, Genseric and his soldiers sailed up and down the Mediterranean, living as pirates and raiders. One legend has it that Genseric was unable to vault upon a horse because of a fall he had taken as a young man; so he assuaged his desire for military glory on the sea. 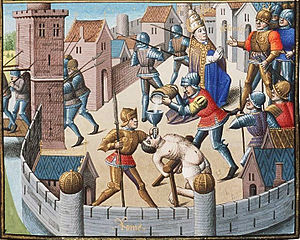 In 455, Roman emperor Valentinian III was murdered on orders of Petronius Maximus, who usurped the throne. Genseric was of the opinion that these acts voided his 442 peace treaty with Valentinian, and on May 31, he and his men landed on Italian soil and marched on Rome, where Pope Leo I implored him not to destroy the ancient city or murder its inhabitants. Genseric agreed and the gates of Rome were thrown open to him and his men.[6]

Maximus, who fled rather than fight the Vandal warlord, was killed by a Roman mob outside the city. Although history remembers the Vandal sack of Rome as extremely brutal — making the word vandalism a term for any wantonly destructive act — in actuality the Vandals did not wreak great destruction in the city; they did, however, take gold, silver and many other things of value. He also took with him Empress Licinia Eudoxia, Valentinian's widow, and her daughters, Eudocia and Placidia. Many important people were taken hostage for even more riches.[6] Eudocia married Genseric's son Huneric after arriving in Carthage. They had been betrothed earlier as an act of solidifying the treaty of 442.

In 468, Genseric's kingdom was the target of the last concerted effort by the two halves of the Roman Empire. They wished to subdue the Vandals and end their pirate raids. Genseric, against long odds, defeated the eastern Roman fleet commanded by Basiliscus off Cap Bon. According to Procopius, the total invasion force consisted of 100,000 men with a fleet drawn from the whole of the eastern Mediterranean.[7] Genseric sent a fleet of 500 Vandal ships against the Romans, losing 340 ships in the first engagement, but succeeded in destroying 600 Roman ships in the second. The Romans abandoned the campaign and Genseric remained master of the western Mediterranean until his death, ruling from the Strait of Gibraltar all the way to Tripolitania.[8]

Following up the Byzantine defeat, the Vandals tried to invade the Peloponnese but were driven back by the Maniots at Kenipolis with heavy losses.[9] In retaliation, the Vandals took 500 hostages at Zakynthos, hacked them to pieces, and threw the pieces overboard on the way to Carthage.[9]

In 474, Genseric made peace with the Eastern Roman Empire. Finally, on January 25, 477, he died at Carthage.