pronunciation (help·info)),[N 1] officially the City of Gaithersburg, is a city located in Montgomery County, Maryland. At the time of the 2010 census, Gaithersburg had a population of 59,933, making it the fourth largest incorporated city in the state, behind Baltimore, Frederick, and Rockville.[4] Gaithersburg is located to the northwest of Washington, D.C., and is considered a suburb and a primary city within the Washington–Arlington–Alexandria, DC–VA–MD–WV Metropolitan Statistical Area. Gaithersburg was incorporated as a city in 1878.

Gaithersburg is divided into east and west sections, separated by Interstate 270. The eastern section of the city is older and is the original portion of the town before more recent growth. Landmarks and buildings from that time can still be seen in many places but especially in the historic central business district of Gaithersburg called "Olde Towne". The east side also includes Lakeforest Mall, City Hall, and the Montgomery County Fair grounds. The west side of the city has many wealthier neighborhoods that were designed with smart growth techniques and embrace New Urbanism. These include the award-winning Kentlands community, the Lakelands community, and the Washingtonian Center (better known as The Rio), a popular shopping/business district. Three New Urbanism communities are under construction, including Crown Farm, Watkins Mill Town Center (Casey East and West), and the massive "Science City". The state has a bus rapid transit line, Corridor Cities Transitway or "CCT", planned for the western portion of the city starting at Shady Grove Metro Station and connecting all the high density western Gaithersburg neighborhoods with a total of eight stops planned in the city.

The National Institute of Standards and Technology (NIST) is headquartered in Gaithersburg directly west of I-270.[N 2] Other major employers in the city include IBM, Lockheed Martin Information Systems and Global Services business area headquarters, MedImmune (a wholly owned subsidiary of AstraZeneca), and the French multinational corporation, Sodexo.

Gaithersburg is also the location of the garrison of the United States Army Reserve's 220th Military Police Brigade. 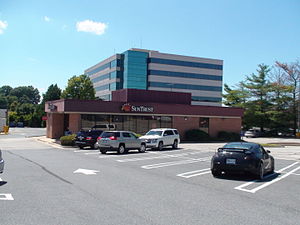 A Gaithersburg SunTrust Bank in August 2015.

Gaithersburg was settled in 1765 as a small agricultural settlement known as Log Town near the present day Summitee Hall on Ralph Crabb's 1725 land grant "Deer Park".[5] The northern portion of the land grant was purchased by Henry Brookes, and he built his brick home "Montpelier" there, starting first with a log cabin in 1780/3. This 1,000 acre tract became part of the landmark "IBM Headquarters" complex built on the then new I-270 Interstate 'Industrial' now 'Technology' Corridor in the late 1960s-1970s. Benjamin Gaither married Henry's daughter Margaret, and Benjamin and Margaret inherited a portion of Henry's land prior to Henry's death in 1807. Gaither built his home on the land in 1802.[6] By the 1850s the area had ceased to be called log town and was known to inhabitants as Gaithersburg.[7]

The Forest Oak Post Office, named for a large tree in the town, was located in Gaither's store in 1851. However, when the railroad was built through town the new station was called Gaithersburg, an officially recognized name for the community for the first time. The town incorporated under its current name in 1878. Gaithersburg boomed during the late 19th century and churches, schools, a mill, grain elevators, stores, and hotels were built. Much of this development focused around the railroad station.[7]

In 1873 the B&O Railroad constructed a station at Gaithersburg,[5] designed by Ephraim Francis Baldwin as part of his well-known series of Victorian stations in Maryland.[8] Rapid growth occurred shortly thereafter, and on April 5, 1878 the town was officially incorporated as the City of Gaithersburg.

In 1899, Gaithersburg was selected as one of six global locations for the construction of an International Latitude Observatory as part of a project to measure the Earth's wobble on its polar axis. The Gaithersburg Latitude Observatory is (as of 2007) the only National Historic Landmark in the City of Gaithersburg. The observatory and five others in Japan, Italy, Russia, and the United States gathered information that is still used by scientists today, along with information from satellites, to determine polar motion; the size, shape, and physical properties of the earth; and to aid the space program through the precise navigational patterns of orbiting satellites. The Gaithersburg station operated until 1982 when computerization rendered the manual observation obsolete.

Gaithersburg remained a predominantly rural farm town until the 1970s when more construction began. As the population grew, with homes spreading throughout the area, Gaithersburg began taking on a suburban and semi-urban feel, leaving its farming roots behind. During the late 1990s and 2000s, it had become one of the most economically and ethnically diverse areas in the Washington, D.C. Metropolitan Area as well as the State of Maryland, with people from all walks of life calling Gaithersburg home. This can be seen in the local schools, with Gaithersburg High School and Watkins Mill High School having two of the most diverse student bodies in the region.

During a 1997 rainstorm, the 295-year-old forest oak tree that gave its name to the Forest Oak Post Office crashed down.[9] The tree served as the inspiration for the city's logo, which is also featured prominently on the city's flag.[9]

On July 16, 2010, Gaithersburg was hit by a 3.6 magnitude earthquake, one of the strongest to occur in Maryland.

There were 22,000 households of which 37.1% had children under the age of 18 living with them, 48.3% were married couples living together, 12.7% had a female householder with no husband present, 5.1% had a male householder with no wife present, and 33.9% were non-families. 26.7% of all households were made up of individuals and 7.5% had someone living alone who was 65 years of age or older. The average household size was 2.70 and the average family size was 3.24.

According to the City's 2009 Comprehensive Annual Financial Report,[15] the top employers in the city are:

Gaithersburg also receives significant income from its conference organization platform including prominent conferences such as the CHI 84 conference.

Gaithersburg has an elected, five-member City Council, which serves as the legislative body of the city. The Mayor, who is also elected, serves as president of the council. The day-to-day administration of the City is overseen by a career City Manager. Gaithersburg is also the location of the 220th Military Police Brigade of the United States Army Reserve.

The city's current mayor is Jud Ashman, who has held the office since 2014. On September 3, 2014, Sidney Katz The Incumbent Mayor submitted his conditional resignation of mayor effective November 10, 2014 pending his election as District 3 representative on the Montgomery County Council in November’s general election.[16] On October 6, 2014, the Gaithersburg City Council selected City Council Member Jud Ashman to serve as mayor until the next City of Gaithersburg election in November 2015. Ashman was re-elected in November, 2015. [17]

The departments of the city of Gaithersburg and their directors include: 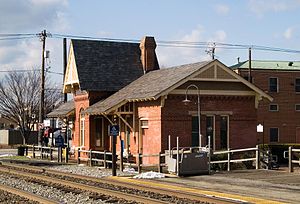 The Gaithersburg train station in January 2007

The primary spine of Gaithersburg's road network is Frederick Avenue, which runs generally north-south through the middle of the city and connects Gaithersburg to Frederick, Rockville and Washington, D.C. Among the most important east-west roads are Diamond Avenue and Quince Orchard Road.

Interstate 270, runs approximately parallel to Frederick Avenue and connects Gaithersburg with the Capital Beltway. Interstate 370 begins in Gaithersburg and is the western end of the Intercounty Connector, a toll highway which provides a direct link to Interstate 95 near Laurel.

Gaithersburg is connected to the Washington Metro via Shady Grove station, which is located just outside the city limits and is the north-western terminus of the Red Line.

The Corridor Cities Transitway is a proposed bus rapid transit line that would have 8 stops in Gaithersburg, generally in the western half of the city.

The mainline of CSX Transportation bisects Montgomery County and runs as many as 50 trains a day through the center of Gaithersburg. The MARC trains run on the CSX tracks, as do Amtrak trains, which go through Gaithersburg but do not stop. 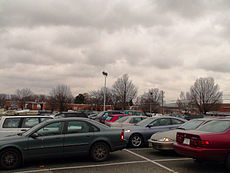 Gaithersburg is primarily served by the Washington, D.C. media market.

Cable TV/Internet: The following cable TV and internet providers have franchise agreements with the City of Gaithersburg: