The Galata Bridge (Turkish: Galata Köprüsü) is a bridge that spans the Golden Horn in Istanbul, Turkey. From the end of the 19th century in particular, the bridge has featured in Turkish literature, theater, poetry and novels.

The first bridge on the Golden Horn, built by Justinian the Great, can be seen near the Theodosian Land Walls at the western end of the city in this rendering of old Constantinople.

The first recorded bridge over the Golden Horn in Istanbul was built during the reign of Justinian the Great in the 6th century, close to the area near the Theodosian Land Walls at the western end of the city.

In 1453, during the Fall of Constantinople, the Turks assembled a mobile bridge by placing their ships side by side across the water, so that their troops could move from one side of the Golden Horn to the other.

In the years 1502–1503, there were plans to construct the first bridge at the current location. Sultan Bayezid II solicited a design and Leonardo da Vinci, utilizing three well-known geometrical principles, the pressed-bow, parabolic curve and keystone arch, created an unprecedented single span 240 m long and 24 m wide bridge for the Golden Horn, which would have become the longest bridge in the world of that time, had it been constructed. However, the ambitious design was not approved by the Sultan.

A smaller-scale version of Leonardo da Vinci's Golden Horn Bridge was brought to life in 2001 near Oslo, Norway by the contemporary artist Vebjørn Sand, the first civil engineering project based on a Leonardo da Vinci sketch to be constructed. The Leonardo Bridge Project hopes to build the design as a practical footbridge around the world, including the Golden Horn in Istanbul, using local materials and collaborating with local artisans as a global public art project. The Wall Street Journal referred to the Project as a "...logo for the nations."[1]

Another Italian artist, Michelangelo, was also invited to design a bridge for Istanbul. Michelangelo rejected the proposal, and the idea of building a bridge across the Golden Horn was shelved until the 19th century.

In the early 19th century, Mahmud II (1808–1839) had a bridge built a bit further up the waterway, between Azapkapı and Unkapanı. This bridge, known as the Hayratiye (Benefaction in English), was opened on September 3, 1836. The project was carried out by Deputy Lord High Admiral Fevzi Ahmet Paşa using the workers and facilities of the naval arsenal. According to the History of Lutfi, this bridge was built on linked pontoons and was around 500 to 540 m long.

The first Galata Bridge at the mouth of the waterway was constructed in 1845 by Valide Sultan, the mother of Sultan Abdülmecid (1839–1861) and used for 18 years. It was known as the Cisr-i Cedid or New Bridge to distinguish it from the earlier bridge further up the Golden Horn, which became known as the Cisr-i Atik or Old Bridge.[citation needed] This bridge was built of wood. Baedeker's also called it "Sultan Valideh Bridge" during this time.[2]

For the first three days, crossing the bridge was free. After that, a toll known as mürüriye was paid to the Naval Ministry. Toll-collecting started on November 25, 1845 and the following tolls were collected: 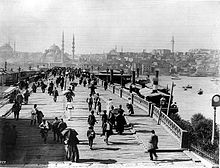 Between 1880-1893, the Galata Bridge and in the background the New Mosque, Istanbul. 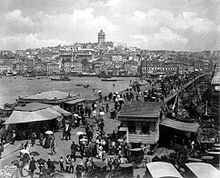 Toll was collected until May 31, 1930 by officials in white uniforms standing on both ends of the bridge.

This bridge was replaced by a second wooden bridge in 1863, built by Ethem Pertev Paşa on the orders of Sultan Abdülaziz (1861–1876) during the infrastructure improvement works prior to the visit of Napoleon III to Istanbul.

In 1870, a contract was signed with a French company, Forges et Chantiers de la Mediteranée for construction of a third bridge, but the outbreak of war between France and Germany delayed the project, which was given instead to the British firm G. Wells in 1872. This bridge, completed in 1875, was 480 m long and 14 m wide and rested on 24 pontoons. It was built at a cost of 105,000 gold liras. It was used until 1912, when it was pulled upstream to replace the old Cisr-i Atik Bridge.

The fourth Galata Bridge was built in 1912 by the German firm Hüttenwerk Oberhausen AG for 350,000 gold liras. This floating bridge was 466 m long and 25 m wide. It is the bridge, still familiar to many people today, that was badly damaged in a fire in 1992 and towed up the Golden Horn to make way for the current bridge. 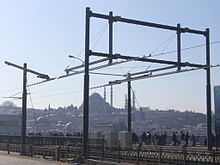 Detail of the break in the overhead lines for the trams between one bascule (left) and the fixed part of the bridge. The Süleymaniye Mosque is in the background.

Fishermen on the bridge. The Yeni Cami is in the background.

The fifth Galata bridge was built by the Turkish construction company STFA just a few meters away from the previous bridge, between Karaköy and Eminönü, and completed in December 1994. It was designed and supervised by GAMB (Göncer Ayalp Engineering Company). It is a bascule bridge, which is 490 m long with a main span of 80 m. The deck of the bridge is 42 m wide and has three vehicular lanes and one walkway in each direction. Tram tracks were recently re-added to it, allowing the Istanbul Tram to run from Zeytinburnu, in the suburbs near Atatürk International Airport, to Kabataş, a few blocks before Dolmabahçe Palace.

The rest of the bridge, including the market area on the first floor, opened to common use in 2003.

The Galata Bridge was a symbolic link between the traditional city of Istanbul proper, site of the imperial palace and principal religious and secular institutions of the empire, and the districts of Galata, Beyoğlu, Şişli and Harbiye, where a large proportion of the inhabitants were non-Muslims and where foreign merchants and diplomats lived and worked. As Peyami Safa wrote in his novel, Fatih-Harbiye, a person who went from Fatih to Harbiye via the bridge set foot in a different civilization and a different culture. Apart from its place in fiction, the romantic appearance of the Galata Bridge made it the subject of many paintings and engravings.