From Infogalactic: the planetary knowledge core
Jump to: navigation, search
This article is about the currently standing Galata Tower built by the Genoese in 1348. For the Megalos Pyrgos (Great Tower) built by the Byzantines at a nearby but different location (closer to the sea) and destroyed during the Sack of Constantinople by the Latin Crusaders in 1204, see Galata Tower (old).

The Galata Tower (Galata Kulesi in Turkish) — called Christea Turris (the Tower of Christ in Latin) by the Genoese — is a medieval stone tower in the Galata/Karaköy quarter of Istanbul, Turkey, just to the north of the Golden Horn's junction with the Bosphorus. One of the city's most striking landmarks, it is a high, cone-capped cylinder that dominates the skyline and offers a panoramic vista of Istanbul's historic peninsula and its environs.

The nine-story tower is 66.90 meters tall (62.59 m without the ornament on top, 51.65 m at the observation deck), and was the city's tallest structure when it was built. The elevation at ground level is 35 meters above sea-level. The tower has an external diameter of 16.45 meters at the base, an 8.95 meters diameter inside, and walls that are 3.75 meters thick.

There is a restaurant and café on its upper floors which command a magnificent view of Istanbul and the Bosphorus. Also located on the upper floors is a night club which hosts a Turkish show. There are two operating elevators that carry visitors from the lower level to the upper levels. 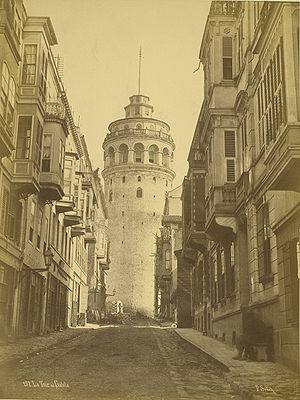 Albumen print of the Galata Tower, taken by Pascal Sébah some time between 1875–1886. Here the tower has the cupola that was built after the storm of 1875. The present-day conical top is a reconstruction of a previous one, and was built during restoration works between 1965 and 1967.

The Romanesque style tower was built as Christea Turris (Tower of Christ) in 1348 during an expansion of the Genoese colony in Constantinople. Galata Tower was the tallest building in Istanbul at 219½ feet (66.9 m) when it was built in 1348.[2] It was built to replace the old Tower of Galata, an original Byzantine tower named Megalos Pyrgos (English: Great Tower) which controlled the northern end of the massive sea chain that closed the entrance to the Golden Horn. That tower was on a different site and was largely destroyed in 1203, during the Fourth Crusade of 1202–1204.[3]

The upper section of the tower with the conical cap was slightly modified in several restorations during the Ottoman period when it was used as an observation tower for spotting fires. 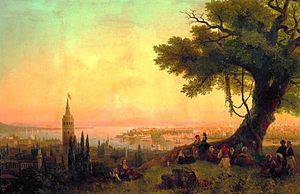 According to the Seyahatname of Ottoman historian and traveller Evliya Çelebi, in circa 1630-1632, Hezarfen Ahmet Çelebi flew as an early intercontinental aviator using artificial wings for gliding from this tower over the Bosphorus to the slopes of Üsküdar on the Anatolian side, nearly six kilometres away.[4] Evliyâ Çelebi also tells of Hezarfen's brother, Lagari Hasan Çelebi, performing the first flight with a rocket in a conical cage filled with gunpowder in 1633.

Starting from 1717 the Ottomans began to use the tower for spotting fires in the city. In 1794, during the reign of Sultan Selim III, the roof of the tower was made of lead and wood, and the stairs were severely damaged by a fire. Another fire damaged the building in 1831, upon which a new restoration work took place.

In 1875, during a storm, the conical roof on the top of the building was destroyed.[5][6] The tower remained without this conical roof for the rest of the Ottoman period. Many years later, during the restoration works between 1965 and 1967, the conical roof was reconstructed.[5][6] During this final restoration in the 1960s, the wooden interior of the tower was replaced by a concrete structure and it was commercialized and opened to the public.

From the top of the tower, the first French panorama painter Pierre Prévost drew in 1818 his "Panorama de Constantinople" which was later exhibited in Paris in 1825.[7]

The panorama image shown below is composed of ten photos[8] taken from the Galata Tower by the photographic firm of Sébah & Joaillier, and is most likely to have been taken in the 1880s.

Error creating thumbnail: File with dimensions greater than 25 MP
Panoramic view from the observation deck in 2015 (corresponding view to the historic photo above)