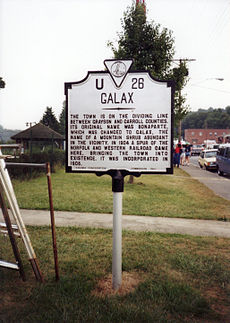 Galax /ˈɡeɪlæks/ is an independent city in the southwestern part of the Commonwealth of Virginia. As of the 2010 census, the population was 7,042.[3] The Bureau of Economic Analysis combines the city of Galax with neighboring Carroll County for statistical purposes. Galax is bounded to the northeast by Carroll County and to the southwest by Grayson County.

Galax was founded along the watercourse of Chesnut Creek which has provided an abundant water supply for the city as well as furnishing an early source of power. The Norfolk and Western Railway extended a spur into the village, then called Blairs, with the first train arriving in 1904. The town itself was incorporated in 1906. It was named after Galax, an evergreen plant growing in the area.[4] The railroad provided both freight and passenger transportation that facilitated the growth of industry and provided many of the necessities of life for the people. The manufacture of furniture, textiles, mirrors, garments, and hardwood flooring formed the economic backbone for the area. The processing of condensed milk also enabled many small farms to sell limited quantities of milk that were processed in Galax.

During the 1950s, Galax chose to separate from the two counties into whose territory it extended and became an independent city. That status fueled initial economic growth and provided a strong tax base for a number of years. While cooperating with both Grayson and Carroll Counties, Galax was able to chart an independent course to better respond to the needs of its citizens.

With the decline in economy, Galax has seen the closing of all but one of its furniture factories leaving much of the population unemployed.

The building of an Open Access Network called "The Wired Road" began in 2007 by a consortium consisting of the City of Galax along with Carroll and Grayson counties. Consisting of both optical fiber and wireless broadband networks, it is projected to reach 80% of regional homes and businesses by 2012.[5] 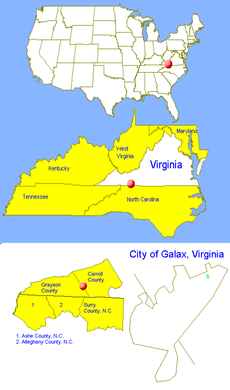 According to the United States Census Bureau, the city has a total area of 8.3 square miles (21 km2), virtually all of which is land.[7]

There were 2,950 households out of which 27.6% had children under the age of 18 living with them, 46.0% were married couples living together, 12.7% had a female householder with no husband present, and 37.5% were non-families. 34.2% of all households were made up of individuals and 14.9% had someone living alone who was 65 years of age or older. The average household size was 2.27 and the average family size was 2.90. 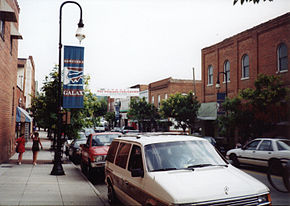 Located in the Appalachian region of the United States, Galax has long been famous for its traditional, or "old-timey" music and musicians. Although the entire Appalachian region is known for its music, the region around Mount Airy, North Carolina, and Galax is one of the few areas of the United States where this music has remained strongest, even among young people. The Old Fiddler's Convention, one of the most prominent traditional music contests in the United States, has been held annually in Galax since 1935.[2] It has long attracted the best up-and-coming musicians in the bluegrass firmament. The Blue Ridge Music Center with its amphitheather and music museum of old-time music is just a few miles away on the Blue Ridge Parkway at Milepost 213.

During the spring and summer, the area is blessed with many festivals and conventions, then in the fall and winter, you will find special events in addition to the fabulous show Mother Nature puts on every day of the year, first at the leaves turn scarlet, orange and gold and then as refreshing mountain snows blanket the landscape.

There are numerous recreational activities available in Galax and the surrounding region.

Location: This is a 57-mile long state park that follows an abandoned railroad right-of-way. There are several entrances into this park. The park meanders through Grayson, Carroll, Wythe and Pulaski counties in southwestern Virginia and parallels the scenic and historic New River for 39 miles. This park is part of the Rails to Trails Program as it was donated to the state by Norfolk Southern Railroad when the railroad discontinued the line and removed the tracks. This park also serves as a link to numerous other outdoor recreational areas, including a town park in Fries, Mt. Rogers National Recreational Area, four Department of Game and Inland Fisheries boat launches and Shot Tower Historical State Park. New River Trail is just minutes from Claytor Lake State Park and Grayson Highlands State Park. This unique park features 57 miles of continuous trail.

Crooked Creek Wildlife Management Area – Elevation: 2,383 ft. – Hiking, Equine Trails and Trout Fishing Crooked Creek WMA offers 1,796 acres of land that encompasses shrub-lined streambeds, rhododendron thickets, eastern hardwood forests, clearings and fields of early successional growth, grassy meadows, and scattered pine stands. This site ranges in elevation from 2,400 to 3,000 feet. Although there are no formal trails in place, access into some of these diverse habitats is fairly easy. Woodland edges beyond the clearings to the northeast of the creek are good places to look for chestnut-sided warbler and rose-breasted grosbeak. Black bear, even more difficult to see, also reside in this area. Butterflies such as spicebush swallowtail, eastern-tailed blue, and great spangled and meadow fritillaries are abundant in the flowering meadows. Common whitetail, a moderate-sized dragonfly, can also be found perched along woodland edges. Naturalists seeking early morning exploration may be greeted with dusk hatchings of luna moth or quick glimpses of the smaller denizens of these woods, such as short-tailed shrew.

There are numerous other national forests, recreational areas, rivers and streams to explore, hunt and fish. There are scenic vistas to view from the Blue Ridge Parkway, especially during the changing and brilliant colors of the autumn season.

Some of the earliest musicians to record country music came from this area. This rich history has kept the traditional arts alive and flourishing in Galax.

The Galax Old Fiddler's Convention has been held annually the week ending on the second Saturday of August since 1935. This music competition has earned Galax the distinction of being known as the "World Capital of Old Time Mountain Music". Attracting participants and visitors worldwide. Old Time, Bluegrass and Folk Music are showcased as well as flatfoot and clogging dancers. Young and old compete for prizes, but it is the family atmosphere and the opportunity to play music with old friends that keeps people coming back year after year.

The Galax Leaf & String Festival is held the second weekend in June every year. Craft vendors, food concessions, instrument makers and music fill the streets for this two-day festival. A special music event is held at the Blue Ridge Music Center on Saturday night. "Blue Ridge Backroads Live," a unique weekly radio show featuring Old Time and Bluegrass bands from throughout the region, is broadcast live at the Rex Theatre by the local radio station and reaches four states and over 40 counties. It is also possible to listen to Blue Ridge Backroads Live on the World Wide Web at http://www.blueridgecountry98.com/ The shows are attended by many local residents as well as visitors from around the globe. Tour buses are always welcome.

The Blue Ridge Music Center at Milepost 213 on the Blue Ridge Parkway, was established by the U.S. Congress to celebrate a living musical culture and commemorate the historic roots of American music. The new facility, 12 miles from Galax, includes an outdoor amphitheater, interpretive center, luthier shop, and natural areas. Weekend events are held June through September offering performances and educational exhibits. The Blue Ridge Music Center is operated by The National Council for the Traditional Arts with cooperative agreements from the National Park Service. The music center enjoys a very cordial relationship with the City of Galax.

Every July since 2004 "Smoke on the Mountain" has attracted barbecue teams, judges, tourists, fans and locals to enjoy two days of high-spirited competition along with many other festivities. "Smoke on the Mountain" is the official state barbecue cook-off, which brings the smell of authentic barbecue prepared by award-winning vendors that attracts people each year to historic downtown Galax. Locals and tourists get a taste, not just of good food and entertainment, but of the city itself and what it has to offer. Along with the professional barbecue smokers and rigs, the festival features a variety of street vendors and children’s activities. Bluegrass and old-time musicians will jam along in the streets of the "World Capital of Old Time Mountain Music”. Night festivities consist of dancing the night away with beach music. Professional barbecue teams come from all over to Galax for the coveted handmade banjo trophy and bragging rights. Many of these teams were featured on the Food Network and the Travel Channel for their award-winning recipes. This is one of the best-organized events on the Memphis Barbecue Network circuit as stated by Randy and Cathy McGee, president of the Memphis Barbecue Network and reported by the Galax Gazette in 2010. (Funk, 2010) The different categories are Pork Shoulder, Whole Hog, Pork Rib, Anything Butt, Sauce, and the locally sought-after Patio Porker.[14] The event is featured on the Porker Kanas City BBQ Society (http://www.kcbs.us/) and the Memphis Barbecue Network (http://www.mbnbbq.com) The festival is sponsored by the Galax Smokehouse (http://thegalaxsmokehouse.com/) and the Twin County Regional Chamber of Commerce (http://www.gcgchamber.com/). For more information on this event go to http://www.smokeonthemountainva.com/#

Galax sits in the Blue Ridge Mountains of Southwest Virginia. It is an independent city that sits between Carroll County and Grayson County on the North Carolina border. To the north, the land drops into the Great Valley of Virginia, to the south, the Piedmont of North Carolina. Galax sits in a valley, at roughly 2500' elevation. To the East, Carroll and Floyd counties rise to 3,000' in elevation on average, with peaks approaching 4,000'. To the west, lie the highest mountains in Virginia. Mount Rogers and Whitetop both eclipse 5200'. Galax City, Carroll County, and Grayson County, are often considered part of the North Carolina High Country due to their proximity, as well as very similar geographic and climatic characteristics.

Summers in Galax are often mild and humid. Average highs are in the low 80's, about 10 degrees cooler than the surrounding lowlands. Fall is often rainy and cool, with snowflakes not uncommon before Halloween. Winters average between 30–40" of snow per year—which is considerably more than the surrounding areas to the south. Temperatures struggle to hit 40 from December to March, with many nights in the single digits.

According to weather records, the town has an oceanic climate (Cfb) with monthly averages ranging from 32.5° to 70.7° F in January and July, respectively. [3]

The Blue Ridge Mountains are home to some unique microclimates. For instance, many times when the winds turn from the east, the area is inundated with moisture off of the Atlantic Ocean resulting in fog and drizzle for days on end. This is a climate characteristic of the Pacific Northwest.

To the west, in the winter time, the highest mountains of southwest Virginia experience lake effect snowfall when the winds turn from the northwest.

Frequent temperature drops and vastly changing weather conditions occur in this portion of the state. This is caused by not only the elevation difference, but by orographic lift, making it easier for the atmosphere to produce precipitation. Often in the winter, the area will receive several inches of snow, while many places to the north in the New River Valley, and to the south in the Piedmont of North Carolina get only rain.

It is old folklore that in the late 19th century and early 1920s, people would cut chunks of ice out of the rivers in the wintertime, cover them with sawdust, and refrigerate their meat through the warm seasons.

Galax is served by the Galax City Public School Division