Galaxidi or Galaxeidi (Greek: Γαλαξίδι/Γαλαξείδι), is a town and a former municipality in the southern part of Phocis, Greece. Since the 2011 local government reform it is part of the municipality Delphi, of which it is a municipal unit.[2]

Galaxidi has a small harbor on the north coast of the Gulf of Corinth. It is 7 km southwest of Itea, 15 km southwest of Delphi, 17 km south of Amfissa and 48 km east of Naupactus. The Greek National Road 48 connects Galaxidi with Naupactus, Itea and Delphi. Galaxidi is a 2.5h to 3h drive from the capital Athens and a relatively popular weekend retreat.

Until the late 19th century, Galaxidi had a sizeable merchant marine fleet and was a prosperous commercial centre. This is reflected in the size and style of the local buildings. Preservation of the traditional architecture has facilitated the growth of tourism in recent decades. The marine museum contains exhibits from this period. 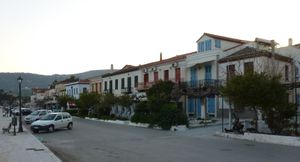 In recent years commercial fish farming has been developing.

Galaxidi is a small port situated on a natural double harbour surrounded by mountains. The deeper main harbour provides docking facilities for yachts and small fishing boats and is lined with restaurants, bars, and stores. The smaller harbour is Chirolaka.

On the rocky shoreline by the side of the larger harbour, is a pine forest planted by school children in the early twentieth century. There is a road behind the town that leads up the mountain to the Monastery of the Metamorphosis (actually a convent that was inhabited by one nun as of 2010). This provides a splendid view of the town and its surroundings.

The municipal unit Galaxidi consists of the following communities: 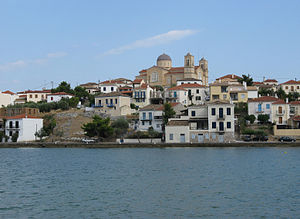 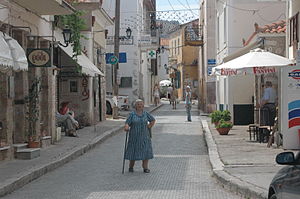 Street of the town. 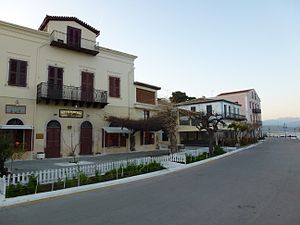 Houses at the promenade.

The Carnival Season in Greece ends with the celebration of Clean Monday which coincides with the beginning of the Greek Orthodox Lent. On that particular day the custom of Alevromoutzouroma (Greek: Αλευρομουτζούρωμα, literally Flour Smudging, or else Flour Wars), takes place in Galaxidi. The origins of the custom are unclear, however it appears in its current form since the mid-19th century.

Around noon, locals and visitors of all ages dressed up in old clothes rendezvous at a predefined location where flour is distributed in large quantities. Various types of coloring is added for effect while people paint their faces with charcoal. Then they march to the harbor which is usually split into a war zone and a neutral zone for the observers and the fight begins. The participants throw each other (and to unsuspected bystanders) colored flour until essentially they run out of supplies.