Gale Storm (April 5, 1922 – June 27, 2009) was an American actress and singer who starred in two popular television programs of the 1950s, My Little Margie and The Gale Storm Show.

Storm was born Josephine Owaissa Cottle in Bloomington, Victoria County, Texas. The youngest of five children, she had two brothers and two sisters. Her father, William Walter Cottle, died after a year-long illness when she was just seventeen months old, and her mother, Minnie Corina Cottle, struggled to raise the children alone.

Her elder sister Lois gave her baby sister the middle name "Owaissa", a Norridgewock Native American word meaning "bluebird". Her mother, Minnie Cottle, took in sewing, then opened a millinery shop in McDade, Texas, which failed, and finally moved her family to Houston. Storm learned to be an accomplished dancer and became an excellent ice skater at Houston's Polar Palace. She performed in the drama club at both Albert Sidney Johnston Junior High School and San Jacinto High School.

When she was 17 years old, two of her teachers urged her to enter a contest on Gateway to Hollywood, broadcast from the CBS Radio studios in Hollywood, California.[1] First prize was a one-year contract with a movie studio. She won and was immediately given the stage name Gale Storm. Her performing partner (and future husband), Lee Bonnell from South Bend, Indiana, became known as Terry Belmont.

Storm had a role in the radio version of Big Town.[2] After winning the contest in 1940, Storm made several films for the studio, RKO Radio Pictures. Her first was Tom Brown's School Days, playing opposite Jimmy Lydon and Freddie Bartholomew.[1] She worked steadily in low-budget films released during this period. In 1941, she sang in several Soundies, three-minute musicals produced for "movie jukeboxes".

She acted and sang in Monogram Pictures' popular Frankie Darro series, and played ingénue roles in other Monogram features with the East Side Kids, Edgar Kennedy and The Three Stooges, most notably in the film Swing Parade of 1946. Monogram had always relied on established actors with reputations, but in Gale Storm the studio finally had a star of its own. She played the lead in the studio's most elaborate productions, both musical and dramatic. She shared top billing in Monogram's Cosmo Jones, Crime Smasher (1943), opposite Edgar Kennedy, Richard Cromwell, and Frank Graham in the role of Jones, a character derived from network radio.

Storm proceeded to star in a number of films, including the romantic comedies G.I. Honeymoon (1945) and It Happened on Fifth Avenue (1947), the western Stampede and the 1950 film-noir dramas The Underworld Story and Between Midnight and Dawn. U.S. audiences warmed to Storm and her fan mail increased. She performed in more than three dozen motion pictures for Monogram, experience which made possible her success in other media.

She became a television icon of the 1950s, starring in two highly successful series. It was also in this decade that her singing career took shape. She appeared on such variety programs as The Pat Boone Chevy Showroom.[3][4]

In 1950, Storm made her TV debut in Hollywood Premiere Theatre on ABC. From 1952 to 1955, she starred in My Little Margie. The show, which co-starred former silent film actor Charles Farrell as her father, was originally a summer replacement for I Love Lucy on CBS,[1] but ran for 126 episodes on NBC and CBS. The series was broadcast on CBS Radio from December 1952 to August 1955 with the same actors. Her popularity was capitalized on when she served as hostess of the NBC Comedy Hour in the winter of 1956. That year she starred in another situation comedy, The Gale Storm Show (aka Oh! Susanna), featuring another silent movie star, ZaSu Pitts. The Gale Storm show ran for 143 episodes between 1956 and 1960. Storm appeared regularly on other television programs in the 1950s and 1960s. She was both a panelist and a "mystery guest" on What's My Line? 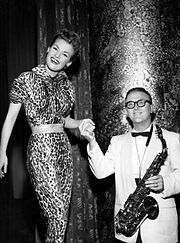 Storm with Billy Vaughn. The two wrote "You're My Baby Doll" and performed it on Storm's television show in 1958.

In Gallatin, Tennessee, in November 1954, a 10-year-old girl, Linda Wood, was watching Storm on a Sunday night television variety show, NBC's Colgate Comedy Hour, hosted by Gordon MacRae, singing one of the popular songs of the day.

Linda's father asked her who was singing and was told it was Gale Storm from My Little Margie. Linda's father Randy Wood was president of Dot Records, and he liked Storm so much that he called to sign her before the end of the television show. Her first record, "I Hear You Knockin'", a cover version of a rhythm and blues hit by Smiley Lewis, sold over a million copies.[5]

The follow-up was a two-sided hit, with Storm covering Dean Martin's "Memories Are Made of This" backed with her cover of Gloria Mann's "A Teenage Prayer". That was followed by a hit cover of Frankie Lymon's "Why Do Fools Fall in Love". Storm's subsequent record sales began to slide but soon rebounded with a cover of her own labelmate Bonnie Guitar's haunting ballad "Dark Moon" that went to No. 4 on the Billboard Hot 100.[citation needed] Storm had several other hits and headlined in Las Vegas and appeared in numerous stage plays. Storm recorded for only about two years with Dot and then gave up recording because of her husband's concerns with the time she had to devote to that career.[citation needed]

In her later years she struggled with alcoholism, in her own words:

During the 1970s I experienced a terribly low and painful time of dealing with alcoholism. I had Lee's unfailing support through the entire ordeal. My treatment and recovery were more than rugged. At that time, there was such a stigma attached to alcoholism, particularly for women, that it could be hazardous to your reputation and career. I thank God daily that I have been fully recovered for more than 20 years. During my struggle, I had no idea of the blessing my experience could turn out to be! I've had the opportunity to share with others suffering with alcoholism the knowledge that there is help, hope, and an alcohol-free life awaiting them.[7]

She later became an active member of the South Shores Church. She once said: "Life has been good and I thank God for His many blessings and the happy life He has given to me."[7]

Storm was a registered Republican and campaigned for U.S. Senator Barry M. Goldwater in the 1960s.[8]

Storm made occasional television appearances in later years, such as Love Boat, Burke's Law, and Murder, She Wrote.[1]

In 1981, she published her autobiography, I Ain't Down Yet, which described her battle with alcoholism. She was also interviewed by author David C. Tucker for The Women Who Made Television Funny: Ten Stars of 1950s Sitcoms, published in 2007 by McFarland and Company.[citation needed]

Storm continued to make personal appearances and autographed photos at fan conventions, along with Charles Farrell from the My Little Margie series. She also attended events such as the Memphis Film Festival, the Friends of Old-Time Radio and the Mid-Atlantic Nostalgia Convention.[citation needed]

Storm lived alone in Monarch Beach, California, near two of her sons and their families, until failing health forced her into a convalescent home in Danville, California. She died there on June 27, 2009, aged 87.[9]

Storm has three stars on the Hollywood Walk of Fame for her contributions to television, recordings, and radio.[10][11]