From Infogalactic: the planetary knowledge core
Jump to: navigation, search
For other uses, see Galleon (disambiguation). 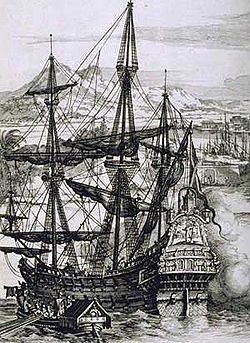 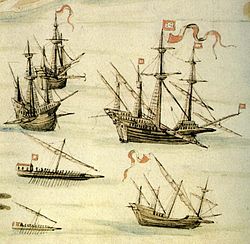 Carracks, galleon (center/right), square rigged caravel (below), galley and fusta (galliot) depicted by D. João de Castro on the "Suez Expedition" (part of the Portuguese Armada of 72 ships sent against the Ottoman fleet anchored in Suez, Egypt, in response to its entry in the Indian Ocean and the siege of Diu in 1538) - Tábuas da India in the João de Castro`s Roteiro do Mar Roxo (Routemap of the Red Sea) of 1540-1541. - Despite this kind of ship (or only a close model of art) was already depicted in the heraldry of the Foral of Lisbon (of D. Manuel I) in 1502, it is in 1510 (as also in some of the following years after 1510) the appearance of the Portuguese oceanic galleon in the records. It is however from 1519 that their number increases substantially, but gradually. It was an evolution and a gradual improvement in the design made during the first quarter of the century - technical improvement which continued until the second half of the century. The Portuguese galleon evolved from the square rigged caravel and was a compromise between the great carrack or nau and the aforementioned square rigged caravel or war caravel (also called caravela de armada or Portuguese man of war) that evolved into a new design of ship, but keeping its hull design similar to the galley.[1] It was also more maneuverable, more robust and heavily armed.

A galleon was a large, multi-decked sailing ship used primarily by European states from the 16th to 18th centuries.

The term Galleon "large ship", comes from Old French Galion "little ship" (13c.), from Spanish (Castilian) Galeón "armed merchant ship", from Portuguese Galeão "war ship", from Byzantine Greek Galea "galley" + augmentative suffix -on.[2] Another possible origin is the Old French word galie meaning "galley".[3] The term was originally given to certain types of war galleys in the Middle Ages. The Annali Genovesi mentions galleons of 80, 64 and 60 oars, used for battle and on missions of exploration, in the 12th and 13th centuries. It is very likely that the galleons and galliots mentioned in the accounts of the crusades were the same vessels.[citation needed] Later, when the term started to be applied to sail only vessels, it meant, like the English term "man of war", a warship that was otherwise no different from the other sailing ships of the time.[citation needed]

Documentary sources point to a new type of sailing ship built in early 16th century Venice. It was called Gallioni and used by the Venetians against pirates. By the second half of the century, Galleons were already seen along the Mediterranean.[4] A lowering of the forecastle and elongation of the hull gave galleons an unprecedented level of stability in the water, and reduced wind resistance at the front, leading to a faster, more maneuverable vessel. The galleon differed from the older types primarily by being longer, lower and narrower, with a square tuck stern instead of a round tuck, and by having a snout or head projecting forward from the bows below the level of the forecastle. In Portugal at least, carracks were usually very large ships for their time (often over 1000 tons), while galleons were mostly under 500 tons, although the Manila galleons were to reach up to 2000 tons. With the introduction of the galleon in Portuguese India Armadas during the first quarter of the 16th century,[5][6] carracks gradually began to be less armed and became almost exclusively cargo ships (which is why the Portuguese Carracks were pushed to such large sizes), leaving any fighting to be done to the galleons. One of the largest and most famous of Portuguese galleons was the São João Baptista (nicknamed Botafogo, 'spitfire'), a 1,000-ton galleon built in 1534, said to have carried 366 guns.

Carracks also tended to be lightly armed and used for transporting cargo in all the fleets of other Western European states, while galleons were purpose-built warships, and were stronger, more heavily armed, and also cheaper to build (5 galleons could cost around the same as 3 carracks) and were therefore a much better investment for use as warships or transports. There are disputes about its origins and development but each Atlantic sea power built types suited to its needs, while constantly learning from their rivals. It was the captains of the Spanish navy, Pedro Menéndez de Avilés and Álvaro de Bazán, who designed the definitive long and relatively narrow hulled galleon for Spain in the 1550s.[7][8]

The galleon was powered entirely by wind, using sails carried on three or four masts, with a lateen sail continuing to be used on the last (usually third and fourth) masts. They were used in both military and trade applications, most famously in the Spanish treasure fleet, and the Manila Galleons. While carracks played the leading role in early global explorations, galleons also played a part in the 16th and 17th centuries. In fact, galleons were so versatile that a single vessel may have been refitted for wartime and peacetime roles several times during its lifespan. The galleon was the prototype of all square rigged ships with three or more masts for over two and a half centuries, including the later full rigged ship.

The principal warships of the opposing English and Spanish fleets in the 1588 confrontation of the Spanish Armada were galleons, with the modified English "race built" galleons developed by John Hawkins proving decisive, while the capacious Spanish galleons, designed primarily as transports, showed great endurance in the battles and in the great storms on the voyage home; most survived the ordeal. 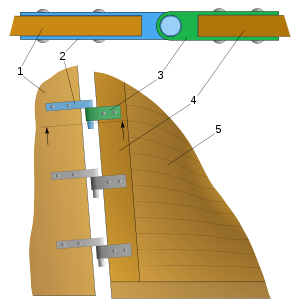 The galleon's pintle and gudgeon rudder

Galleons were constructed from oak (for the keel), pine (for the masts) and various hardwoods for hull and decking. Hulls were usually carvel-built. The expenses involved in galleon construction were enormous. Hundreds of expert tradesmen (including carpenters, pitch-melters, blacksmiths, coopers, shipwrights, etc.) worked day and night for months before a galleon was seaworthy. To cover the expense, galleons were often funded by groups of wealthy businessmen who pooled resources for a new ship. Therefore, most galleons were originally consigned for trade, although those captured by rival states were usually put into military service.

The most common gun used aboard a galleon was the demi-culverin, although gun sizes up to demi-cannon were possible.

Because of the long periods often spent at sea and poor conditions on board, many of the crew often perished during the voyage; therefore advanced rigging systems were developed so that the vessel could be sailed home by an active sailing crew a fraction of the size aboard at departure. 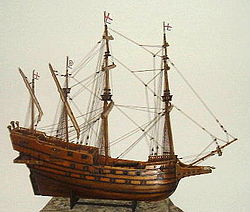 The most distinguishing features of the galleon include the long beak, the lateen-rigged mizzenmasts, and the square gallery at the stern off the captain's cabin. In larger galleons, a fourth mast was added, usually a lateen-rigged mizzen, called the bonaventure mizzen.

The galleon continued to be used into the 18th century, by which time purpose-built vessels such as the fluyt, the brig and the full rigged ship, both as a trading vessel and ship of the line, rendered it obsolete for trade and warfare respectively.

The oldest known scale drawings in England are in a manuscript called "Fragments of Ancient Shipwrightry" made in about 1586 by Mathew Baker, a master-shipwright. This manuscript, held at the Pepysian Library, Magdalene College, Cambridge, provides an authentic reference for the size and shape of typical English galleons built during this period. Based on these plans, the Science Museum, London has built a 1:48 scale model ship that is an exemplar of galleons of this era.[9]

The Galleon or Gold-Galleon (G) is also used as a currency in the Harry Potter series by J.K. Rowling