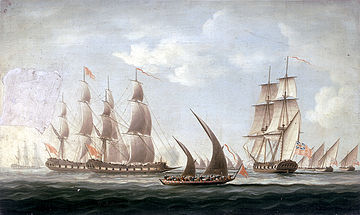 Mahratta pirate grabs and gallivats attacking the sloop Aurora of the Bombay Marine. The boat in the foreground is a gallivat.

The gallivat (or galivat, or gallevat) was a small, armed boat, with sails and oars, used on the Malabar Coast in the 18th and 19th Centuries. The word may derive from Portuguese "galeota"; alternatively, it may derive from Mahratta "gal hat" - ship. Hobson-Jobson has an extensive discussion of the origins of the term and its usage.[1]

The gallivat typically had one or two masts with a lateen sail, and some 20 benches for oarsmen, one on each side. They were generally under 70 tons (bm) in size, and had a prow much like that of a grab.

One of the ablest admirals of the 18th Century Maratha Navy, Kanhoji Angre (aka Angria), made great use of gallivats. Generally, each of his grabs would have an attendant gallivat, both to tow it in calms and to carry extra men.[2]

On 26 December 1735 Angre attacked the East Indiaman Derby off Suvarnadurg. He deployed nine galleys, five grabs, and fifteen gallivats. Derby eventually struck her colours after having had seven men killed and five wounded. Angre kept the surviving crew prisoners for 11 months until the Governor of Bombay ransomed them.[3]

A painted scroll depicting different grabs, gallivats, and other types of vessels the Marathan Navy, including some captured English ships.

A galivat that the EIC captured in 1775 measured 84 feet in length, and 24 feet in breadth, which yields a burthen of 213 tons (bm). She had a single, forward-raked mast, and 24 oars, and carried ten 6-pounder guns.[8] This would seem to be at the upper end of the size for a galivat, and represent a vessel more in the range of sizes for a grab.