From Infogalactic: the planetary knowledge core
(Redirected from Gallo-Roman)
Jump to: navigation, search

This article covers the culture of Romanized areas of Gaul. For the political history of the brief "Gallic Empire" of the third century, see Gallic Empire. 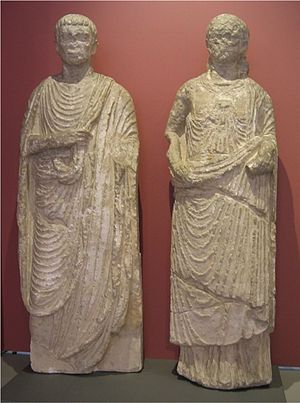 The term Gallo-Roman describes the Romanized culture of Gaul under the rule of the Roman Empire. This was characterized by the Gaulish adoption or adaptation of Roman morals and way of life in a uniquely Gaulish context.[1] The well-studied meld of cultures[2] in Gaul gives historians a model against which to compare and contrast parallel developments of Romanization in other, less-studied Roman provinces.

Interpretatio romana offered Roman names for Gaulish deities such as the smith-god Gobannus,[3] but of Celtic deities only the horse-patroness Epona penetrated Romanized cultures beyond the confines of Gaul.[4]

The barbarian invasions beginning in the early fifth century forced upon Gallo-Roman culture fundamental changes in politics, in the economic underpinning, in military organization. The Gothic settlement of 418 offered a double loyalty, as Western Roman authority disintegrated at Rome. The plight of the highly Romanized governing class[5] is examined by R.W. Mathisen,[6] the struggles of bishop Hilary of Arles by M. Heinzelmann,[7]

Into the seventh century, Gallo-Roman culture would persist particularly in the areas of Gallia Narbonensis that developed into Occitania, Cisalpine Gaul and to a lesser degree, Gallia Aquitania. The formerly Romanized north of Gaul, once it had been occupied by the Franks, would develop into Merovingian culture instead. Roman life, centered on the public events and cultural responsibilities of urban life in the res publica and the sometimes luxurious life of the self-sufficient rural villa system, took longer to collapse in the Gallo-Roman regions, where the Visigoths largely inherited the status quo in 418. Gallo-Roman language persisted in the northeast into the Silva Carbonaria that formed an effective cultural barrier with the Franks to the north and east, and in the northwest to the lower valley of the Loire, where Gallo-Roman culture interfaced with Frankish culture in a city like Tours and in the person of that Gallo-Roman bishop confronted with Merovingian royals, Gregory of Tours. Based on mutual intelligibility, David Dalby counts seven languages descended from Gallo-Romance: Gallo-Wallon, French, Franco-Provençal (Arpitan), Romansh, Ladin, Friulian, and Lombard.[8] However, other definitions are far broader, variously encompassing the Rhaeto-Romance languages, Occitano-Romance languages, and Gallo-Italic languages.

Gaul was divided by Roman administration into three provinces, which were sub-divided in the later third century reorganization under Diocletian, and divided between two dioceses, Galliae and Viennensis, under the Praetorian prefecture of Galliae.[9] On the local level, it was composed of civitates which preserved, broadly speaking, the boundaries of the formerly independent Gaulish tribes, which had been organised in large part on village structures that retained some features in the Roman civic formulas that overlaid them.

Over the course of the Roman period, an ever-increasing proportion of Gauls gained Roman citizenship. In 212 the Constitutio Antoniniana extended citizenship to all free-born men in the Roman Empire. 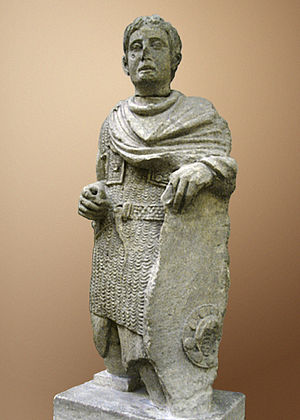 During the Crisis of the Third Century, from 260 to 274, Gaul was subject to Alamanni raids because of the civil war. In reaction to local problems the Gallo-Romans appointed their own emperor Postumus. The rule over Gaul, Britannia, and Hispania by Postumus and his successors is usually called The Gallic Empire although it was just one set of many usurpers who took over parts of the Roman Empire and tried to become emperor. The capital was Trier which was often used as the northern capital of the Roman Empire by many emperors. The Gallic Empire ended when Aurelian decisively defeated Tetricus I at Chalons.

The pre-Christian religious practices of Roman Gaul were characterized by syncretism of Graeco-Roman deities with their native Celtic, Basque or Germanic counterparts, many of which were of strictly local cult. Assimilation was eased by interpreting indigenous gods in Roman terms, such as with Lenus Mars or Apollo Grannus. Otherwise, a Roman god might be paired with a native goddess, as with Mercury and Rosmerta. In at least one case – that of the equine goddess Epona – a native Gallic goddess was also adopted by Rome.

The imperial cult, centred primarily on the numen of Augustus, came to play a prominent role in public religion in Gaul, most dramatically at the pan-Gaulish ceremony venerating Rome and Augustus at the Condate Altar near Lugdunum annually on 1 August.

Gregory of Tours recorded the tradition that after the persecution under the co-emperors Decius and Gratus (250-51 CE), future pope Felix I sent seven missionaries to re-establish the broken and scattered Christian communities, Gatien to Tours, Trophimus to Arles, Paul to Narbonne, Saturninus to Toulouse, Denis to Paris, Martial to Limoges, and Austromoine to Clermont.[10]

In the fifth and sixth centuries, Gallo-Roman Christian communities still consisted of independent churches in urban sites, each governed by a bishop; Christians experienced loyalties divided between the bishop and the civil prefect, who operated largely in harmony within the late-imperial administration. Some of the communities had origins that predated the third-century persecutions. The personal charisma of the bishop set the tone, as fifth-century allegiances, for pagans as well as Christians, switched from institutions to individuals: most Gallo-Roman bishops were drawn from the highest levels of society as appropriate non-military civil roads to advancement dwindled, and they represented themselves as bulwarks of high literary standards and Roman traditions against the Vandal and Gothic interlopers; other bishops drew the faithful to radical asceticism. Bishops often took on the duties of civil administrator after the contraction of the Roman imperial administration due to the Barbarian invasions of the 5th century, helping fund building projects and even acting as arbiters of justice in the local community. Miracles attributed to both kinds of bishops, as well as holy men and women, attracted cult veneration, sometimes very soon after their death; a great number of locally venerated Gallo-Roman and Merovingian saints arose in the transitional centuries 400 – 750. The identification of the diocesan administration with the secular community, which took place during the fifth century in Italy, can best be traced in the Gallo-Roman culture of Gaul in the career of Caesarius, bishop and Metropolitan of Arles from 503 to 543. (Wallace-Hadrill). 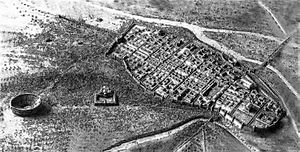 Roman culture introduced a new phase of anthropomorphized sculpture to the Gaulish community,[11] synthesized with Celtic traditions of refined metalworking, a rich body of urbane Gallo-Roman silver developed, which the upheavals of the second and fifth centuries motivated hiding away in hoards, which have protected some pieces of Gallo-Roman silver, from villas and temple sites, from the universal destruction of precious metalwork in circulation. The exhibition of Gallo-Roman silver highlighted specifically Gallo-Roman silver from the treasures found at Chaourse (Aisne), Mâcon (Saône et Loire), Graincourt-lès-Havrincourt (Pas de Calais),Notre-Dame d'Allençon (Maine-et-Loire), and Rethel (Ardennes, found in 1980).[12]

The two more Romanized of the three Gauls were bound together in a network of Roman roads that linked cities. Via Domitia (laid out in 118 BC), reached from Nîmes to the Pyrenees, where it joined the Via Augusta at the Col de Panissars. Via Aquitania reached from Narbonne, where it connected to the Via Domitia, to the Atlantic Ocean through Toulouse to Bordeaux. Via Scarponensis connected Trier to Lyon through Metz. 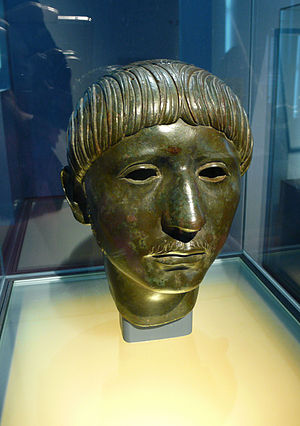 Bust of a Gallo-Roman, from Lausanne, Switzerland, About 200 AD.

At Périgueux, France, a luxurious Roman villa called the Domus of Vesunna, built round a garden courtyard surrounded by a colonnaded peristyle enriched with bold tectonic frescoing, has been handsomely protected in a modern glass-and-steel structure that is a fine example of archaeological museum-making (see external link).

Lyon, the capital of Roman Gaul, is now the site of the Gallo-Roman Museum of Lyon (rue Céberg), associated with the remains of the theater and odeon of Roman Lugdunum. Visitors are offered a clear picture of the daily life, economic conditions, institutions, beliefs, monuments and artistic achievements of the first four centuries of the Christian era. The "Claudius Tablet" in the Museum transcribes a speech given before the Senate by the Emperor Claudius in 48, in which he requests the right for the heads of the Gallic nations to participate in Roman magistracy. The request having been accepted, the Gauls decided to engrave the imperial speech on bronze.

In Metz, once an important town of Gaul, the Golden Courtyard Museums displays a rich collection of Gallo-Roman finds and the vestiges of Gallo-Roman baths, revealed by the extension works to the museums in the 1930s.

In Martigny, Valais, Switzerland, at the Fondation Pierre Gianadda, a modern museum of art and sculpture shares space with Gallo-Roman Museum centered on the foundations of a Celtic temple. 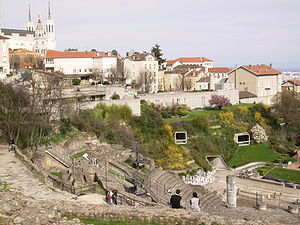 The Gallo-Roman museum in the amphitheatre of Lugdunum