Other language families which are sometimes included in the Gallo-Romance: 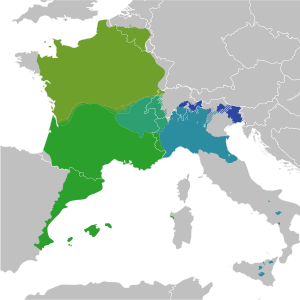 The approximate extent of the Gallo-Romance languages as natively spoken in Europe (according to the broadest definition of the term).

How far the Gallo-Romance languages spread varies a great deal depending on which languages are included in the group. Those included in its narrowest definition (i.e. the Langues d'oïl and Arpitan) were historically spoken in the north of France, parts of Flanders, Alsace, part of Lorraine, the Wallonia region of Belgium, the Channel Islands, parts of Switzerland, and northern Italy.

Today, a single Gallo-Romance language (French) dominates much of this geographic region (including the formerly non-Romance areas of France) and has also spread overseas.

At its broadest, the area also encompasses southern France, Catalonia, Valencia and the Balearic islands in eastern Spain, and much of northern Italy.

The Gallo-Romance languages are generally considered the most innovative (least conservative) among the Romance languages. Northern France (i.e. the medieval area of the langue d'oïl, out of which modern French developed) was the epicentre. Characteristic Gallo-Romance features generally developed earliest and appear in their most extreme manifestation in the langue d'oïl, gradually spreading out from there along riverways and roads. The earliest vernacular Romance writing occurred in Northern France, as the development of vernacular writing in a given area was forced by the almost total inability of Romance speakers to understand Classical Latin, still the vehicle of writing and culture.

Gallo-Romance languages are usually characterised by the loss of all unstressed final vowels other than /-a/ (most significantly, final /-o/ and /-e/ were lost). However, when the loss of a final vowel would result in an impossible final cluster (/tr/), a prop vowel appears in place of the lost vowel, usually /e/. Generally, the same changes also occurred in final syllables closed by a consonant.

Other than southern Occitano-Romance, the Gallo-Romance languages are quite innovatory, with French and some of the Gallo-Italian languages rivaling each other for the most extreme phonological changes compared with more conservative languages. For example, French sain, saint, sein, ceint, seing meaning "healthy, holy, breast, (he) girds, signature" (Latin sānum, sanctum, sinum, cinget, signum) are all pronounced /sɛ̃/.

In other ways, however, the Gallo-Romance languages are conservative. The older stages of many of the languages are famous for preserving a two-case system consisting of nominative and oblique, fully marked on nouns, adjectives and determiners, inherited almost directly from the Latin nominative and accusative cases and preserving a number of different declensional classes and irregular forms.

In the opposite of the normal pattern, the languages closest to the oïl epicentre preserve the case system the best, and languages at the periphery (near languages that had long before lost the case system except on pronouns) lost it early. For example, the case system was preserved in Old Occitan until around the 13th century but had already been lost in Old Catalan, despite the fact that there were very few other differences between the two.

The Occitan group is known for an innovatory /ɡ/ ending on many subjunctive and preterite verbs and an unusual development of [ð] (Latin intervocalic -d-), which, in many varieties, merges with [dz] (from intervocalic palatalised -c- and -ty-).

Notable characteristics of the Gallo-Romance languages are: