From Infogalactic: the planetary knowledge core
Jump to: navigation, search
Not to be confused with Galo language.

Gallo is a regional language of France. It is not as commonly spoken as it once was, as the standard form of French now predominates. Gallo is classified as one of the Oïl languages.

Gallo was originally spoken in the Marches of Neustria, which now corresponds to the border lands of Brittany and Normandy and its former heart in Le Mans, Maine. Gallo was the shared spoken language of the leaders of the Norman conquest of England, most of whom originated in Upper Brittany and Lower Normandy. Thus Gallo was a vehicle for the subsequent transformation ("Gallicisation") of English.

Gallo continued as the language of Upper Brittany, Maine and some neighbouring portions of Normandy until the introduction of universal education across France, but today Gallo is spoken by only a small minority of the population, having been largely superseded by standard French.

As an Oïl language, Gallo forms part of a dialect continuum which includes Norman, Picard and Poitevin, among others. One of the features that distinguishes it from Norman is the absence of Norse influence. There is some limited intercomprehension with adjacent varieties of the Norman language along the linguistic frontier and with Dgèrnésiais and Jèrriais. However, as the dialect continuum shades towards Mayennais, there is a less clear isogloss. The clearest isogloss is that distinguishing Gallo from Breton, a Celtic language traditionally spoken in the western territory of Brittany.

In the west, the vocabulary of Gallo has been influenced by contact with Breton, but remains overwhelmingly Latinate. The influence of Breton decreases eastwards across Gallo-speaking territory.

The term gallo is sometimes spelled galo or gallot.[2] It is also referred to as langue gallèse or britto-roman in Brittany.[3] In south Lower Normandy and in the west of Pays de la Loire it is often referred to as patois,[4] though this is a matter of some contention.[5] Gallo comes from the Breton word gall[6] meaning “foreign”, “French” or “non-Breton”.[7]

The Celts, who came from central Europe, settled in Armorica toward the 8th century BC. Many peoples were formed there, such as the Redones and the Namnetes. They spoke dialects of the Gaulish language[8] and maintained important economic ties with the British Isles.[9] Julius Caesar’s invasion of Armorica in 56 BC led to a sort of Romanization of the population.[10] Gaulish continued to be spoken in this region until the 6th century,[11] especially in less populated, rural areas. Thus, when the Bretons emigrated to Armorica around this time, they found a people who had retained their Celtic language and culture.[12] The Bretons were therefore able to easily integrate.

In contrast to Armorica’s western countryside, Nantes and Rennes were real Roman cultural centres. Following the Barbarian invasion,[13] these two cities, as well as regions to the east of the Vilaine River, including the town Vannes,[14] fell under Frankish rule.[15] Thus, during the Merovingian dynasty, the population of Armorica was diverse, consisting of Gaulish tribes with assimilated Bretons, as well as Romanized cities and Germanic tribes.[16] War between the Frank and Breton kingdoms was constant between the 6th and 9th centuries,[17] which made the border between the two difficult to define. Before the 10th century, Breton was spoken by at least one third of the population[18] up to the cities of Pornic and Avranches. 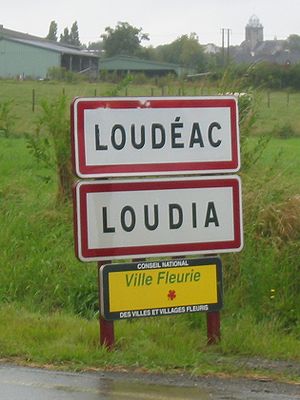 The town of Loudéac displays its Gallo name, Loudia, on signage

One of the metro stations of the Breton capital, Rennes, has bilingual signage in French and Gallo, but generally the Gallo language is not as visibly high-profile as the Breton language, even in its traditional heartland of the Pays Gallo, which includes the two historical capitals of Rennes (Gallo Resnn, Breton Roazhon) and Nantes (Gallo Nauntt, Breton Naoned).

Different dialects of Gallo are distinguished, although there is a movement for standardisation on the model of the dialect of Upper Brittany.

The roots of written Gallo literature are traced back to Le Livre des Manières written in 1178 by Etienne de Fougères, a poetical text of 336 quatrains and the earliest known Romance text from Brittany, and to Le Roman d'Aquin, an anonymous 12th century chanson de geste transcribed in the 15th century but which nevertheless retains features typical of the mediaeval Romance of Brittany. In the 19th century oral literature was collected by researchers and folklorists such as Paul Sébillot, Adolphe Orain, Amand Dagnet and Georges Dottin. Amand Dagnet (1857-1933) also wrote a number of original works in Gallo, including a play La fille de la Brunelas (1901).[19]

It was in the 1970s that a concerted effort to stimulate Gallo literature started. In 1979 Alan J. Raude published a proposed standardised orthography for Gallo.[20]

Bilingual signage in the Rennes metro