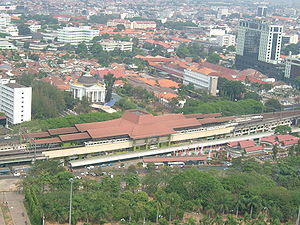 Gambir Station and Immanuel Church are located in the eastern edge of Gambir Subdistrict, Central Jakarta

Gambir is a subdistrict of Central Jakarta, Jakarta, Indonesia. It is characterized by many historic buildings from the colonial era. Gambir Subdistrict is the location of many political and administrative center of Jakarta and Indonesia. The Merdeka Palace (the presidential palace of Indonesia), the National Museum and the Merdeka Square (the location of the National Monument) are located in Gambir.

Gambir is bounded by the Flood Canal (Indonesian: Kanal Banjir) to the west, the river Ciliwung to the east, KH Zainul Arifin and Sukarjo Wiryopranoto Road to the north, and Kebon Sirih Raya Road to the south.

The name Gambir is taken from the name of a Dutch lieutenant of French descent named Gambier, the lieutenant whom Daendels assigned to pave the way to the south.[1]

An aerial picture of the Gambir station during colonial era

The area that is now Gambir Subdistrict was originally a southern hinterland of Batavia with marshes and known for the gambier plant.[2] A kampung settlement existed under the name Kampung Gambir. In the 18th century, a landowner known as Anthony Paviljoen began to developed the area and later rented them to Chinese people who further developed the land as an agricultural land.[2]

When Batavia moved to the south, the Gambir area was subsequently developed. This new development was centered on a large field known as the Merdeka Square. This open field was known as Champ de Mars in 1808 and Koningsplein in 1816. During the governmency of Daendels, the center of administration was moved from the old Batavia to Gambir area, centered in Weltevreden. The area around the large field was characteristically surrounded with colonial buildings, mansions, and other civic facilities. Some of these buildings are restored and have become landmarks of Jakarta, such as the Willemskerk (now the Immanuel Church) and The Batavian Society of Arts and Science (now the National Museum).[3]

The subdistrict of Gambir is divided into six kelurahan or administrative villages: 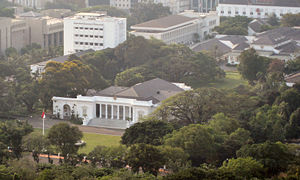