Gambling is the wagering of money or something of value (referred to as "the stakes") on an event with an uncertain outcome with the primary intent of winning additional money and/or material goods. Gambling thus requires three elements be present: consideration, chance and prize.[1] The outcome of the wager is often immediate, such as a single roll of dice or a spin of a roulette wheel, but longer time frames are also common, allowing wagers on the outcome of a future sports contest or even an entire sports season.

The term gaming[2] in this context typically refers to instances in which the activity has been specifically permitted by law. The two words are not mutually exclusive; i.e., a "gaming" company offers (legal) "gambling" activities to the public[3] and may be regulated by one of many gaming control boards, for example, the Nevada Gaming Control Board. However, this distinction is not universally observed in the English-speaking world. For instance, in the UK, the regulator of gambling activities is called the Gambling Commission (not the Gaming Commission).[4] The word gaming is used more frequently since the rise of computer and video games to describe activities that do not necessarily involve wagering, especially online gaming, with the new usage still not having displaced the old usage as the primary definition in common dictionaries.

Gambling is also a major international commercial activity, with the legal gambling market totaling an estimated $335 billion in 2009.[5] In other forms, gambling can be conducted with materials which have a value, but are not real money. For example, players of marbles games might wager marbles, and likewise games of Pogs or Magic: The Gathering can be played with the collectible game pieces (respectively, small discs and trading cards) as stakes, resulting in a meta-game regarding the value of a player's collection of pieces.

Religious perspectives on gambling have been mixed. Ancient Hindu poems like the Gambler's Lament and the Mahabharata testify to the popularity of gambling among ancient Indians. However, the text Arthashastra (c. 4th century BCE) recommends taxation and control of gambling.[6] Religious authorities generally disapprove of gambling. Ancient Jewish authorities frowned on gambling, even disqualifying professional gamblers from testifying in court.[7] The Catholic Church holds the position that there is no moral impediment to gambling, so long as it is fair, all bettors have a reasonable chance of winning, that there is no fraud involved, and the parties involved do not have actual knowledge of the outcome of the bet (unless they have disclosed this knowledge).[8] Gambling has often been seen as having social consequences, as satirized by Balzac. For these social and religious reasons, most legal jurisdictions limit gambling, as advocated by Pascal.[9] Some Islamic nations prohibit gambling; most other countries regulate it.[10] 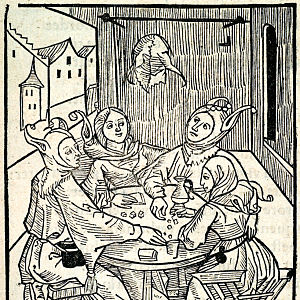 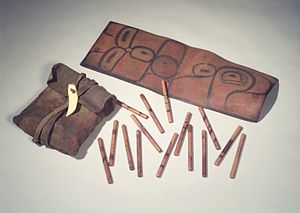 Many popular games played in modern casinos originate from Europe and China.[11] Games such as craps, baccarat, roulette, and blackjack originate from different areas of Europe. A version of keno, an ancient Chinese lottery game, is played in casinos around the world. In addition, pai gow poker, a hybrid between pai gow and poker is also played.[12]

Many jurisdictions, local as well as national, either ban gambling or heavily control it by licensing. Such regulation generally leads to gambling tourism and illegal gambling in the areas where it is not allowed. The involvement of governments, through regulation and taxation, has led to a close connection between many governments and gaming organizations, where legal gambling provides significant government revenue, such as in Monaco or Macau, China.

There is generally legislation requiring that the odds in gaming devices are statistically random, to prevent manufacturers from making some high-payoff results impossible. Since these high-payoffs have very low probability, a house bias can quite easily be missed unless the odds are checked carefully.[13]

Most jurisdictions that allow gambling require participants to be above a certain age. In some jurisdictions, the gambling age differs depending on the type of gambling. For example, in many American states one must be over 21 to enter a casino, but may buy a lottery ticket after turning 18.

Because contracts of insurance have many features in common with wagers, insurance contracts are often distinguished under law as agreements in which either party has an interest in the "bet-upon" outcome beyond the specific financial terms. E.g.: a "bet" with an insurer on whether one's house will burn down is not gambling, but rather insurance — as the homeowner has an obvious interest in the continued existence of his/her home independent of the purely financial aspects of the "bet" (i.e., the insurance policy). Nonetheless, both insurance and gambling contracts are typically considered aleatory contracts under most legal systems, though they are subject to different types of regulation.

Under common law, particularly English Law (English unjust enrichment), a gambling contract may not give a casino bona fide purchaser status, permitting the recovery of stolen funds in some situations. In Lipkin Gorman v Karpnale Ltd, where a solicitor used stolen funds to gamble at a casino, the House of Lords overruled the High Court's previous verdict, adjudicating that the casino return the stolen funds less those subject to any change of position defence. U.S. Law precedents are somewhat similar.[14]

Although different interpretations of sharia law exists in the Muslim world, there is a consensus among the ulema that gambling is haraam (sinful). In assertions made during its prohibition, Muslim jurists describe gambling as being both unquranic and as being generally harmful to the Muslim community. The Islamic terminology for gambling is maisar however this also has a second definition meaning easy money.[15] In parts of the world that implement full sharia law such as Aceh, punishments for Muslim gamblers can range up to 12 lashes or a one-year prison term and a fine for those who provide a venue for such practises.[16] 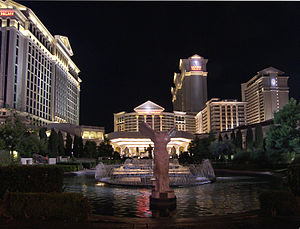 The Caesars Palace main fountain. The statue is a copy of the ancient Winged Victory of Samothrace. 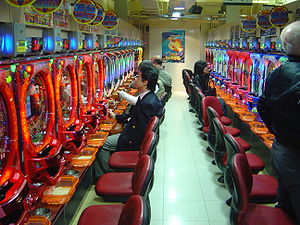 A pachinko parlor in Tokyo, Japan 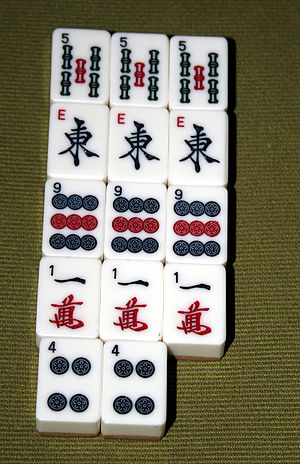 Gambling games that take place outside of casinos include Bingo (as played in the US and UK), dead pool, lotteries, pull-tab games and scratchcards, and Mahjong.

Other non-casino gambling games include:

*Although coin tossing isn't usually played in a casino, it has been known to be an official gambling game in some Australian casinos[17]

Fixed-odds betting and Parimutuel betting frequently occur at many types of sporting events, and political elections. In addition many bookmakers offer fixed odds on a number of non-sports related outcomes, for example the direction and extent of movement of various financial indices, the winner of television competitions such as Big Brother, and election results.[18] Interactive prediction markets also offer trading on these outcomes, with "shares" of results trading on an open market.

One of the most widespread forms of gambling involves betting on horse or greyhound racing. Wagering may take place through parimutuel pools, or bookmakers may take bets personally. Parimutuel wagers pay off at prices determined by support in the wagering pools, while bookmakers pay off either at the odds offered at the time of accepting the bet; or at the median odds offered by track bookmakers at the time the race started.

Betting on team sports has become an important service industry in many countries. For example, millions of people play the football pools every week in the United Kingdom. In addition to organized sports betting, both legal and illegal, there are many side-betting games played by casual groups of spectators, such as NCAA Basketball Tournament Bracket Pools, Super Bowl Squares, Fantasy Sports Leagues with monetary entry fees and winnings, and in-person spectator games like Moundball.

Arbitrage betting is a theoretically risk-free betting system in which every outcome of an event is bet upon so that a known profit will be made by the bettor upon completion of the event, regardless of the outcome. Arbitrage betting is a combination of the ancient art of arbitrage trading and gambling, which has been made possible by the large numbers of bookmakers in the marketplace, creating occasional opportunities for arbitrage.

Other types of betting

One can also bet with another person that a statement is true or false, or that a specified event will happen (a "back bet") or will not happen (a "lay bet") within a specified time. This occurs in particular when two people have opposing but strongly held views on truth or events. Not only do the parties hope to gain from the bet, they place the bet also to demonstrate their certainty about the issue. Some means of determining the issue at stake must exist. Sometimes the amount bet remains nominal, demonstrating the outcome as one of principle rather than of financial importance.

Many betting systems have been created in an attempt to "beat the house" but no system can make a mathematically unprofitable bet in terms of expected value profitable over time. Widely used systems include:

Other uses of the term "gambling" 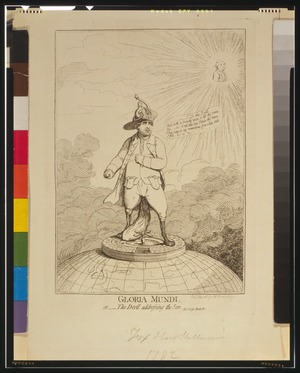 Gloria Mundi, ... or The Devil addressing the sun. Cartoon showing Charles James Fox standing on a roulette wheel perched atop a globe showing England and continental Europe, the implication is that his penniless state, indicated by turned-out pockets, is due to gambling.

Many risk-return choices are sometimes referred to colloquially as "gambling." Whether this terminology is acceptable is a matter of debate:

Some speculative investment activities are particularly risky, but are sometimes perceived to be different from gambling:

Studies show that though many people participate in gambling as a form of recreation or even as a means to gain an income, gambling, like any behavior which involves variation in brain chemistry, can become a harmful, behavioral addiction. Reinforcement schedules may also make gamblers persist in gambling even after repeated losses.[medical citation needed]

The Russian writer Fyodor Dostoevsky (himself a problem gambler) portrays in his novella The Gambler the psychological implications of gambling and how gambling can affect gamblers. He also associates gambling and the idea of "getting rich quick", suggesting that Russians may have a particular affinity for gambling. Dostoevsky shows the effect of betting money for the chance of gaining more in 19th-century Europe. The association between Russians and gambling has fed legends of the origins of Russian roulette. 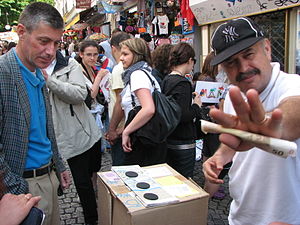 A gambling stand in Paris