Games of the Small States of Europe

The Games of the Small States of Europe (GSSE) is a biennial, multi-sport event, launched by the Republic of San Marino, organized by and featuring the National Olympic Committees of eight European small states since 1985. The Games are held at the end of May or beginning of June, and feature competition in nine Summer Olympic sports. 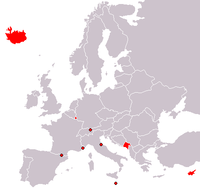 The games are organized by the members of the European Olympic Committees (EOC). From its initial forming at the 1984 Olympics through 2009 there were eight members; the group's ninth member was added in 2009. Members all have a population of less than one million people (Cyprus is the only exception, however its population was below one million in 1984). Participating countries are:

The Faroe Islands are also seeking to compete at the Games; however, unlike the other participants, the Islands are neither an independent state (they are an autonomous part of Denmark) nor are they an EOC member.

At the 2013 Games 11 disciplines were contested (with both men's and women's divisions):

Updated after the 2015 Games of the Small States of Europe.