Gangrene (or gangrenous necrosis) is a type of necrosis caused by a critically insufficient blood supply.[1][2] This potentially life-threatening condition may occur after an injury or infection, or in people suffering from any chronic health problem affecting blood circulation.[2] The primary cause of gangrene is reduced blood supply to the affected tissues, which results in cell death.[3] Diabetes and long-term smoking increase the risk of suffering from gangrene.[2][3]

Gangrene is a non-communicable disease. It does not spread from person to person. There are different types of gangrene with different symptoms, such as dry gangrene, wet gangrene, gas gangrene, internal gangrene and necrotizing fasciitis.[1][2] Treatment depends on the underlying cause, and can include resection, debridement (or, in severe cases, amputation) of the affected body parts, antibiotics, revascularization (via a vascular bypass or angioplasty), or hyperbaric oxygen therapy.[4] It can rarely include medical therapy to stop vascular spasm or the production of cold-induced vascular obstruction by cold-precipitated cryoglobulins.

The etymology of gangrene derives from the Latin word gangraena and from the Greek gangraina (γάγγραινα), which means "putrefaction of tissues". It has no etymological connection with the word green, despite the affected areas turning black and/or green and/or yellowish brown. It is coincidence that, in Lowland Scots the words "gang green" (go green) can be said to be an eggcorn for gangrene, as it describes the symptoms of the affliction.

Gangrene is caused by a critically insufficient blood supply (e.g., peripheral vascular disease) or infection.[3][5][6] It is associated with diabetes[7] and long-term tobacco smoking. This condition most commonly occurs in the lower extremities (legs and feet).

Dry gangrene is a form of coagulative necrosis that develops in ischemic tissue, where the blood supply is inadequate to keep tissue viable. Dry gangrene is often due to peripheral artery disease, but can be due to acute limb ischemia. The limited oxygen in the ischemic limb limits putrefaction and bacteria fail to survive. The affected part is dry, shrunken and dark reddish-black. The line of separation usually brings about complete separation, with eventual falling off of the gangrenous tissue if it is not removed surgically, a process called autoamputation.

Dry gangrene is the end result of chronic ischemia without infection. If ischemia is detected early, when there are ischemic wounds rather than gangrene, the process can be treated by revascularization (via vascular bypass or angioplasty).[medical citation needed] However, once gangrene has developed, the affected tissues are not salvageable.[medical citation needed]

Diabetes mellitus is a risk-factor for peripheral vascular disease and thus for dry gangrene, but also a risk factor for wet gangrene, particularly in patients with poorly controlled blood-sugars, as elevated serum glucose creates a favorable environment for bacterial infection.[8]

Wet, or infected, gangrene is characterized by thriving bacteria and has a poor prognosis (compared to dry gangrene) due to sepsis resulting from the free communication between infected fluid and circulatory fluid. In wet gangrene, the tissue is infected by saprogenic microorganisms (Clostridium perfringens or Bacillus fusiformis, for example), which cause tissue to swell and emit a fetid smell. Wet gangrene usually develops rapidly due to blockage of venous (mainly) and/or arterial blood flow. The affected part is saturated with stagnant blood, which promotes the rapid growth of bacteria. The toxic products formed by bacteria are absorbed, causing systemic manifestation of sepsis and finally death. The affected part is edematous, soft, putrid, rotten and dark.

Gas gangrene is a bacterial infection that produces gas within tissues. It can be caused by Clostridium, most commonly alpha toxin producing Clostridium perfringens, or various non-clostridial species.[6][10] Infection spreads rapidly as the gases produced by bacteria expand and infiltrate healthy tissue in the vicinity. Because of its ability to quickly spread to surrounding tissues, gas gangrene should be treated as a medical emergency.

Gas gangrene is caused by bacterial exotoxin-producing clostridial species, which are mostly found in soil, and other anaerobes such as Bacteroides and anaerobic streptococci. These environmental bacteria may enter the muscle through a wound and subsequently proliferate in necrotic tissue and secrete powerful toxins. These toxins destroy nearby tissue, generating gas at the same time. A gas composition of 5.9% hydrogen, 3.4% carbon dioxide, 74.5% nitrogen, and 16.1% oxygen was reported in one clinical case.[11]

Gas gangrene can cause necrosis, gas production, and sepsis. Progression to toxemia and shock is often very rapid.

The method of treatment is generally determined by the location of affected tissue and extent of tissue loss. The best treatment for gangrene is revascularization (i.e., restoration of blood flow) of the afflicted organ, which can reverse some of the effects of necrosis and allow healing. Other treatments include antibiotic therapy, wound care, debridement and surgical amputation.

Most amputations are performed for ischemic disease of the lower extremity. Of dysvascular amputations, 15–28% of patients undergo contralateral limb amputations within 3 years. Of elderly persons who undergo amputations, 50% survive the first 3 years.[14]

In the United States, 30,000–40,000 amputations are performed annually. There were an estimated 1.6 million individuals living with the loss of a limb in 2005; these estimates are expected to more than double to 3.6 million such individuals by the year 2050.[15] Antibiotics alone are not effective because they may not penetrate infected tissues sufficiently.[16] Hyperbaric oxygen therapy (HBOT) treatment is used to treat gas gangrene. HBOT increases pressure and oxygen content to allow blood to carry more oxygen to inhibit anaerobic organism growth and reproduction.[17] A regenerative medicine therapy was developed by Dr. Peter DeMarco to treat diabetic gangrene to avoid amputations. Growth factors, hormones and skin grafts have also been used to accelerate healing for gangrene and other chronic wounds.

Angioplasty should be considered if severe blockage in lower leg vessels (tibial and peroneal artery) leads to gangrene.[18] 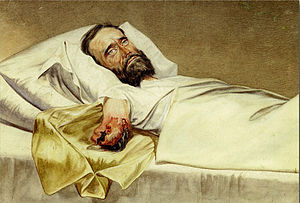 As early as 1028 fly maggots were commonly[citation needed] used to treat chronic wounds or ulcers to prevent or arrest necrotic spread, as some species of maggots consume only dead flesh, leaving nearby living tissue unaffected. This practice largely died out after the introduction of antibiotics, acetonitrile[citation needed] and enzyme to the range of treatments for wounds. In recent times, however, maggot therapy has regained some credibility and is sometimes employed with great efficacy in cases of chronic tissue necrosis.

John M. Trombold wrote: "Middleton Goldsmith, a surgeon in the Union Army during the American Civil War, meticulously studied hospital gangrene and developed a revolutionary treatment regimen. The cumulative Civil War hospital gangrene mortality was 45 percent. Goldsmith's method, which he applied to over 330 cases, yielded a mortality under 3 percent."[19] Goldsmith advocated the use of debridement and topical and injected bromide solutions on infected wounds to reduce the incidence and virulence of “poisoned miasma.” Copies of his book were issued to Union surgeons to encourage the use of his methods.[20]