From Infogalactic: the planetary knowledge core
Jump to: navigation, search
This is a Chinese name; the family name is Gao.

Gao Xingjian (Chinese: 高行健; Mandarin: [káu ɕĭŋ tɕiɛ̂n]; born January 4, 1940) is a Chinese[2] émigré novelist, playwright, and critic who in 2000 was awarded the Nobel Prize for Literature “for an oeuvre of universal validity, bitter insights and linguistic ingenuity.”[1] He is also a noted translator (particularly of Samuel Beckett and Eugène Ionesco), screenwriter, stage director, and a celebrated painter. In 1998, Gao was granted French citizenship.

Gao's drama is considered to be fundamentally absurdist in nature and avant-garde in his native China. His prose works tend to be less celebrated in China but are highly regarded elsewhere in Europe and the West.

Gao's original home town is Taizhou, Jiangsu. Born in Ganzhou, Jiangxi, China in 1940, Gao has been a French citizen since 1998. In 1992 he was awarded the Chevalier de l'Ordre des Arts et des Lettres by the French government.

Early years in Jiangxi and Jiangsu

Gao's father was a clerk in the Bank of China, and his mother was a member of the Young Men's Christian Association. His mother was once a playactress of Anti-Japanese Theatre during the Second Sino-Japanese War. Under his mother's influence, Gao enjoyed painting, writing and theatre very much when he was a little boy. During his middle school years, he read lots of literature translated from the West, and he studied sketching, ink and wash painting, oil painting and clay sculpture under the guidance of painter Yun Zongying (simplified Chinese: 郓宗嬴; traditional Chinese: 鄆宗嬴; pinyin: Yùn Zōngyíng).

Years in Beijing and Anhui

In 1957 Gao graduated, and, following his mother's advice, chose Beijing Foreign Studies University (BFSU) instead of the Central Academy of Fine Arts, although he was thought to be talented in art.

In 1962 Gao graduated from the Department of French, BFSU, and then he worked for the Chinese International Bookstore (中國國際書店). During the 1970s, because of the Down to the Countryside Movement, he went to and stayed in the countryside and did farm labour in Anhui Province. He taught as a Chinese teacher in Gangkou Middle School, Ningguo county, Anhui Province for a short time. In 1975, he was allowed to go back to Beijing and became the group leader of French translation for the magazine China Reconstructs (《中國建設》).

In 1977 Gao worked for the Committee of Foreign Relationship, Chinese Association of Writers. In May 1979, he visited Paris with a group of Chinese writers including Ba Jin. In 1980, Gao became a screenwriter and playwright for the Beijing People's Art Theatre.

Gao is known as a pioneer of absurdist drama in China, where Signal Alarm (《絕對信號》, 1982) and Bus Stop (《車站》, 1983) were produced during his term as resident playwright at the Beijing People's Art Theatre from 1981 to 1987. Influenced by European theatrical models, it gained him a reputation as an avant-garde writer. His other plays, The Primitive (1985) and The Other Shore (《彼岸》, 1986), all openly criticised the government's state policies.

In 1986 Gao was misdiagnosed with lung cancer, and he began a 10-month trek along the Yangtze, which resulted in his novel Soul Mountain (《靈山》). The part-memoir, part-novel, first published in Taipei in 1990 and in English in 2000 by HarperCollins Australia, mixes literary genres and utilizes shifting narrative voices. It has been specially cited by the Swedish Nobel committee as "one of those singular literary creations that seem impossible to compare with anything but themselves." The book details his travels from Sichuan province to the coast, and life among Chinese minorities such as the Qiang, Miao, and Yi peoples on the fringes of Han Chinese civilization.

Years in Europe and Paris

By the late 1980s, Gao had shifted to Bagnolet, a city adjacent to Paris, France. The political Fugitives (1989), which makes reference to the Tiananmen Square protests of 1989, resulted in all his works being banned from performance in China. 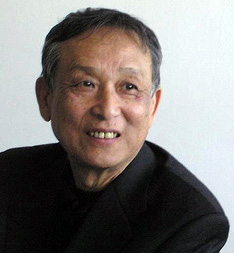 While being forced to work as a peasant – a form of 'education' under the Cultural Revolution – in the 1970s, Gao Xingjian produced many plays, short stories, poems and critical pieces that he had to eventually burn to avoid the consequences of his dissident literature being discovered.[3] Of the work he produced subsequently, he published no collections of poetry, being known more widely for his drama, fiction and essays. However, one short poem exists that represents a distinctively modern style akin to his other writings:

Gao is a renowned painter, especially for his ink and wash painting. His exhibitions have included:

The Premier Zhu Rongji delivered a congratulatory message to Gao when interviewed by the Hong Kong newspaper East Daily (《东方日报》):

Gao's work has led to fierce discussion among Chinese writers, both positive and negative.

Many Chinese writers[who?] comment that Gao's "Chinoiserie", or translatable works, have opened a new approach for Chinese modern literature to the Swedish Academy, and that his winning the Nobel Prize in its 100th anniversary year is a happy occasion for Chinese literature.

In his article on Gao in the June 2008 issue of Muse, a now-defunct Hong Kong magazine, Leo Ou-fan Lee praises the use of Chinese language in Soul Mountain: 'Whether it works or not, it is a rich fictional language filled with vernacular speeches and elegant 文言 (classical) formulations as well as dialects, thus constituting a "heteroglossic" tapestry of sounds and rhythms that can indeed be read aloud (as Gao himself has done in his public readings).'[5]