Garcia de Orta (or Garcia d'Orta) (1501? – 1568) was a Portuguese Renaissance Sephardi Jewish physician, herbalist and naturalist. He was a pioneer of tropical medicine, pharmacognosy and ethnobotany, working mainly in Goa, then a Portuguese colony in India. Garcia de Orta used an experimental approach to the identification and use of herbal medicines rather than the traditional approach of using received knowledge. His magnum opus was a book on the simples (herbs used singly) and drugs published in 1563 Colóquios dos simples e drogas da India, the earliest treatise on the medicinal and economic plants of India. Carolus Clusius translated it into Latin which was widely used as a standard reference text on medicinal plants. Garcia de Orta died before the Goa Inquisition began in Goa but in 1569 his sister was burnt at the stake for being a secret Jew and based on her confession his remains were later exhumed and burnt along with an effigy. Memorials recognizing his contributions have been built both in Portugal and India. 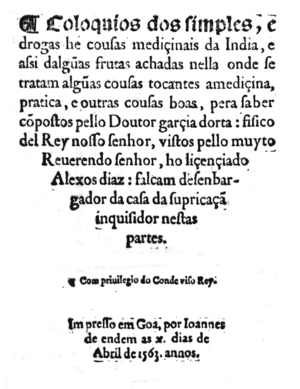 Garcia de Orta was born in Castelo de Vide, probably in 1501, the son of Fernão (Isaac) da Orta, a merchant, and Leonor Gomes. He had three sisters, Violante, Catarina and Isabel. Their parents were Spanish Jews from Valencia de Alcántara who had taken refuge, as many others did, in Portugal at the time of the great expulsion of the Spanish Jews by the Reyes Catolicos Ferdinand and Isabella of Spain in 1492. Forcibly converted to Christianity in 1497, they were pejoratively classed as Cristãos Novos (New Christians) and marranos ("swine"). Some of these refugees maintained their Jewish faith secretly.[1] A friendly neighbour at Castelo de Vide was the nobleman Dom Fernão de Sousa, Lord of Labruja, who may have influenced the idea Garcia father to send him to University. Dom Fernão's son Martim Afonso de Sousa would become a key figure in later life.[2][3]

Garcia studied medicine, arts and philosophy at the Universities of Alcalá de Henares and Salamanca in Spain. He graduated and returned to Portugal in 1525, two years after his father's death. He practiced medicine first in his home town and from 1526 onwards in Lisbon, where he gained a lecturership at the university in 1532.[4] He also became royal physician to John III of Portugal.[5]

Perhaps fearing the increasing power of the Portuguese Inquisition, and fortunately evading the ban on emigration of New Christians, he sailed for Portuguese India leaving Tagus in March 1534 as Chief Physician aboard the fleet of Martim Afonso de Sousa, later to be named Governor. He reached Goa in September. He travelled with Sousa on various campaigns, then, in 1538, settled at Goa, where he soon had a prominent medical practice. He was physician to Burhan Nizam Shah I of the Nizam Shahi dynasty of Ahmadnagar, and concurrently to several successive Portuguese Viceroys and governors of Goa. The King of Portugal through the Viceroy Dom Pedro Mascarenhas granted a lifelong lease (on payment of a quit-rent) to Garcia da Orta for the Ilha da Boa Vida ("the Island of the Good Life") which became a part of Bombay.[6] This was probably somewhere between September 1554 and June 1555. The only condition of the lease was that he had to improve the place. He had a manor house with a large garden. He probably maintained an excellent library here. This manor stood not far from where the Town Hall of Bombay was built. Garcia probably let out the house to Simao Toscano. At the time of Bombay's transfer to the English, the manor was occupied by Dona Ignez de Miranda, widow of Dom Rodrigo de Monsanto. It was in this house that the treaty by which Bombay was transferred to the English was signed by Humphrey Cooke on the 18th of February 1665.[7] Garcia describes the people around Bassein and their traditions in his book.[8]

Contrary to some early biographical accounts, Garcia de Orta married a wealthy cousin, Brianda de Solis, in 1543; the marriage was unhappy, but the couple had two daughters. In 1549 his mother and two of his sisters, who had been imprisoned as Jews in Lisbon, managed to join him in Goa. According to a confession by his brother-in-law after his death, Garcia de Orta privately continued to assert that "the Law of Moses was the true law";[9][10] in other words, he, probably in common with others in his family, remained a Jewish believer. In 1565 the Inquisition was introduced to the Indian Viceroyalty and an inquisitorial court was opened in Goa. Active persecution against Jews, secret Jews, Hindus and New Christians began. Garcia himself died in 1568, apparently without having suffered seriously from this persecution, but his sister Catarina was arrested as a Jew in the same year and was burned at the stake for Judaism in Goa in October 25, 1569. Garcia himself was posthumously convicted of Judaism. His remains were exhumed and burned along with an effigy in an auto da fé on December 4, 1580.[11] They were among 342 New Christians accused of crypto-Judaism of whom 68 were executed between 1561 and 1623.[12] His books were most likely burnt as well, possibly a reason why no copy of his book exists in Goa.[13] The fate of his daughters is not known.[14] During his lifetime, Orta had been protected from the Goa Inquisition by his friend and patron, Martim Afonso de Sousa, Governor-General of Portuguese India from 1542 to 1545.[15] 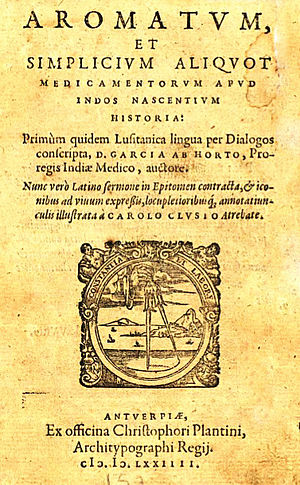 Garcia de Orta's busy practice evidently prevented him from travelling much beyond the west coast of India, but in the busy market and trading hub of Goa he met spice merchants, traders and physicians from many parts of southern Asia and the Indian Ocean coasts. He was confident in Portuguese, Spanish, Hebrew, Latin, Greek and Arabic (he did not know Sanskrit[16]); his work shows that he gathered considerable knowledge from traditional medicine practitioners from several regions of India. Correspondents and agents sent him seeds and plants; he also traded in spices, drugs and precious stones. He evidently kept a laboratory and botanical garden. De Orta was influenced by Yunnani medicine as well as Ayurveda, although quoting Galen, al-Rhazi and Ibn-Sina more often. He tended to use European approaches in medicine and only when they failed did he make use of local methods.[16]

His remarkable knowledge of Eastern spices and drugs is revealed in his only known work, Colóquios dos simples e drogas he cousas medicinais da Índia ("Conversations on the simples, drugs and medicinal substances of India"), the first edition of which was published at Goa in 1563. This book deals with a series of substances, many of them unknown or the subject of confusion and misinformation in Europe at this period. For instance, prior to his publication, tamarind was thought to come from a palm tree. He also noted many details on plants and their propagation.[17] He was the first European to describe the symptoms of several Asiatic tropical diseases, notably cholera; he performed an autopsy on a cholera victim, the first recorded autopsy in India.[16] Garcia de Orta reveals in his writings an unusual independence in face of the usually revered texts of ancient authorities, Greek, Latin and Arabic. The Coloquios has 59 chapters and it was written in the style of a dialogue between da Orta and a traditional doctor, Ruano.[18] Using a dialogue form was a common literary practice when dealing with the tensions between established and new forms of knowledge.[19][3] Orta's work questions assumptions made in the past with alternative hypotheses to the ideas from Ibn-Sina and Averroes. His scientific method has been suggested to be a combination of empiricism and hypothesism.[20]

In one place he points out that the Portuguese traders took little interest in acquiring knowledge:[21]

The Portuguese, who navigate over a greater part of the world only procedure a knowledge of now best to dispose of that merchandise of what they bring here and what they shall take back. They are not desirous of knowing anything about the things in the countries they visit. If they know a product they do not learn from what tree it comes, and if they see it they do not compare it with one of our Indian trees, nor ask about its fruit or what it is like.

The printing press was introduced into Goa in 1556. The printer for Garcia is thought to have been João de Endem who began with Joao Quinquenio de Campania and continued after him.[22] The rare first edition was full of typographical errors and was only the fifth[22] European book ever printed in Goa and among the first few from India.[23] The errata, probably the longest in printing history, ran to twenty pages and end with a statement that the list was probably incomplete.[24] The English translation by Clements Markham included illustrations of some of the Indian plants by Cristóvão da Costa. Markham considered da Costa's work published in Spanish in 1578, Tractado de las drogas y medicinas de las Indias orientales ("Treatise of the drugs and medicines of the East Indies") to be largely based on that of de Orta[25] but some others have pointed out significant differences.[16][26]

Garcia's travels to Portuguese Ceylon (Jaffna) on campaigns with Martim allowed him to study Sri Lankan medicinal plants. Among the descriptions from here are plants used in the treatment of snakebite. Some of the information is based on folklore, such as the plants that were supposedly eaten by mongoose after being bitten by cobras.[27] Orta also described plants of forensic importance such as the use of Datura used by thieves and robbers to poison their victims.[28]

The preface of the book includes a verse by his friend the poet Luís de Camões, now considered as Portugal's national poet. Luis de Camões had been worked briefly in Portuguese Macau before returning to Goa in 1561. In his poem Os Lusíadas, Camões plays on the word "Orta" which refers to his friend as well as mean "garden". The book was dedicated to Dom Francisco Coutinho, Count of Redondo, Viceroy of Goa from 1561 to 1564, and to his friend Martim de Sousa.[29] In the preface he pointed out that he could well have written the book in Latin but chose Portuguese so that the traders and other locals could make use of it.[3]

Garcia de Orta's work was accidentally discovered by Clusius in early 1564 and he translated it into Latin, while also changing it from a dialogue to an epitomized form,[19] and this was widely read across Europe and underwent several editions.[18]

The standard author abbreviation Garcia de Orta is used to indicate this individual as the author when citing a botanical name.[31]