From Infogalactic: the planetary knowledge core
Jump to: navigation, search
For other uses, see Gard (disambiguation).

Gard (French pronunciation: ​[ɡaʁ]; Occitan: Gard) is a department in southern France in the Languedoc-Roussillon-Midi-Pyrénées region.

See also: fr (History of Gard)
The Gard area was settled by the Romans in classical times. It was crossed by the Via Domitia, which was constructed in 118 BC.

Gard is one of the original 83 departments created during the French Revolution on March 4, 1790. It was created from the ancient province of Languedoc.

It was originally intended to include the canton of Ganges in the department which would have been geographically logical, but Ganges was transferred to the neighbouring department of Hérault at the outset. In return, Gard received from Hérault the fishing port of Aigues Mortes which gave the department its own outlet to the Gulf of Lion.

During the middle of the nineteenth century the prefecture, traditionally a centre of commerce with a manufacturing sector focused on textiles, was an early beneficiary of railway development, becoming an important railway junction. Several luxurious hotels were built, and the improved market access provided by the railways also encouraged, initially, a rapid growth in wine growing: however, many of the department's viticulturalists were ruined by the arrival in 1872 of phylloxera. 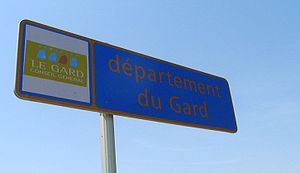 Signpost welcoming travellers into the Gard, at Beaucaire

Gard is part of the region of Languedoc-Roussillon-Midi-Pyrénées and is surrounded by the departments of Hérault, Lozère, Aveyron, Bouches-du-Rhône, Vaucluse, and Ardèche. The highest point in the department is the Mont Aigoual. Serious flooding has occurred in the department in recent years.

The President of the General Council is Damien Alary of the Socialist Party.

In the closely contested first round of the 2012 French Presidential elections, Gard was the only department to vote in the National Front candidate Marine Le Pen by a slim relative majority, with 25.51% of the vote. The incumbent President Sarkozy of the Union for a Popular Movement party received 24.86% of the vote, while Socialist Party candidate François Hollande received 24.11% of the vote share.[1]

Tourism and points of interest

Gard contains a part of the Cévennes National Park.

There are important Roman architectural remains in Nîmes, as well as the famous Roman aqueduct, the Pont du Gard.

Gard is also home to the source of Perrier, a carbonated mineral water sold both in France and internationally on a large scale. The spring and facility are located just south-east of the commune of Vergèze.