Garden Home-Whitford is a census-designated place (CDP)[2] consisting of the neighborhoods of Garden Home and the smaller Whitford area in Washington County, Oregon, United States. They are located in the southwest hills of Portland, near Beaverton. As of the 2000 census, the CDP population was 6,931.

File:Garden Home depot of the Oregon Electric Railway.jpg
Garden Home Railway Depot circa 1911. This structure stood on a trestle at the intersection of Multnomah Blvd and Garden Home Rd. Tracks on the left continued south to Nesmith, Metzger, and Greenburg. Tracks on the right continued northwest to Firlock, Fanno Creek, Whitford, and Beaverton.[3]

Garden Home post office was established in 1882.[4] Garden Home was an established community when the Oregon Electric Railway was built at the beginning of the 20th century, which named a depot on the line for the community.[5] Whitford was a station on the same line, located at the present-day intersection of Allen Road and Scholls Ferry Road (Oregon Route 210); the name was created by combining the names of W. A. White and A.C. Bedford, New York investors who were directors of the railway.

Whitford station closed when the railway stopped running around 1920, and unlike Garden Home, which became the name of a Portland suburb, Whitford exists today primarily as the name of a Beaverton middle school.

According to the United States Census Bureau, the CDP has a total area of 1.9 square miles (4.9 km2), none of which is covered with water.

There were 3,048 households out of which 26.3% had children under the age of 18 living with them, 47.8% were married couples living together, 9.3% had a female householder with no husband present, and 39.8% were non-families. 30.6% of all households were made up of individuals and 7.2% had someone living alone who was 65 years of age or older. The average household size was 2.26 and the average family size was 2.83. 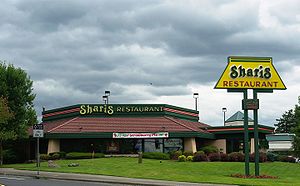 Sharis restaurant in the community

Fire protection and EMS services are provided through Tualatin Valley Fire and Rescue.[6]