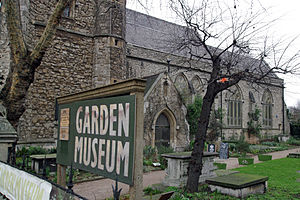 Entrance to the Garden Museum 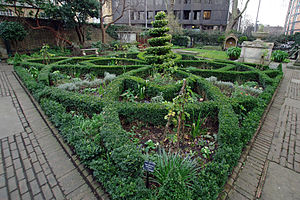 Restored Knot Garden at the museum

The Garden Museum, formerly known as the Museum of Garden History, is based in the deconsecrated parish church of St Mary-at-Lambeth in Lambeth, adjacent to Lambeth Palace on the south bank of the River Thames in London, located on Lambeth Road. The church originally housed the 15th and 16th century tombs of many members of the Howard family, including now-lost memorial brasses to Thomas Howard, 2nd Duke of Norfolk (died 1524), his wife Agnes Tilney, Duchess of Norfolk (died 1545) and is also the burial place of Queen Anne Boleyn's mother Elizabeth Boleyn, formerly Howard.

St Mary's, which was largely a Victorian reconstruction, was deconsecrated in 1972 and was scheduled to be demolished. In 1976 John and Rosemary Nicholson traced the tomb of the two 17th century royal gardeners and plant hunters John Tradescant father and son to the churchyard, and were inspired to create the Museum of Garden History. It was the first museum in the world dedicated to the history of gardening.

The museum's main gallery is the main body of the church. The collection comprises tools, ephemera and a library. The tool collection includes items purchased at auction and donations from individuals and horticultural companies. The ephemera includes items such as prints, photographs, bills, catalogues and brochures, and gives an insight into the social history of gardening as well as the practical aspects of the subject. The museum covers the whole range of gardening, from royal gardens to allotments. In the early 1980s, a 17th-century style knot garden was created in the churchyard, planted with authentic plants of the period.

In 2006 Christopher Woodward, formerly director of the Holburne Museum of Art in Bath, was appointed as the new Director of the organisation.

Development of the museum

The museum is run as an independent registered charity[1] and does not receive government funding, instead depending on Friends, Patrons, and charitable Trusts, in addition to income from admission and events. In its 25th anniversary year in 2002 the museum launched a campaign to raise at least £600,000 to pay for a general overhaul of its facilities. In 2008 the interior of the museum had a total makeover and the renamed museum (now Garden Museum) opened to the public on 18 November of that year.

In 2008 the interior was transformed into a centre for exhibitions and events by the construction of contemporary gallery spaces. Three exhibitions each year explore the making of British gardens, and a programme of over 30 talks and interviews celebrates heroes and heroines from the forgotten plant-hunters and gardeners of the past to the designers and writers in fashion today. Visitors will also see a permanent display of paintings, tools, ephemera and historic artefacts: a glimpse into the uniquely British love affair with gardens.

The Museum is planning a second phase of work to complete the restoration of the ancient structure and its transformation into a Museum. This will add contemporary galleries and spaces for education and events, inserted into the historic interior in an award-winning design by Dow Jones Architects.

This next phase will double the space for display of the permanent collection, 95% of which is in store, and create extra space for schools and community outreach work, in addition to a bigger café, and modern visitor services. At the core of the project is an aspiration to create the country’s first archive of garden and landscape design. The museum is in discussion with The Ashmolean Museum to recreate "Tradescant’s Ark" through the loan of the objects in Tradescant’s collection at Lambeth which were bequeathed to his neighbour, Elias Ashmole.

The museum is developing ideas on shared activities and programmes with three historic garden charities: the Garden History Society, the Association of Garden Trusts, and Parks and Gardens UK. The aim is to celebrate and explore the design, history and art of gardens. 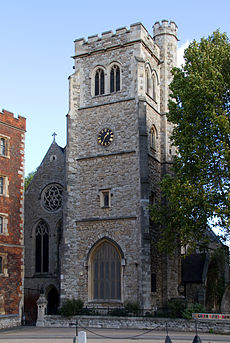 The tower of St Mary-at-Lambeth

The Garden Museum is housed in the medieval and Victorian church of St Mary’s at Lambeth. The first church on the site was built before the Norman Conquest, and was integral to the religious centre established by the Archbishops of Canterbury in the twelfth century. The structure was deconsecrated in 1972 and rescued from demolition by the founder of the Museum, Rosemary Nicholson. The structure of the church was repaired, holding small exhibitions such as The Tradescant Story from 1979. The Museum opened in 1977 as the world’s first museum of garden history; the churchyard was re-designed as a garden.

The church is the oldest structure in the Borough of Lambeth, except for the crypt of Lambeth Palace itself, and its burials and monuments are a record of 950 years of a community. But for the Palace, it has perhaps the richest historical story of any building in the borough.

In 1062 a wooden church was built on the site by Goda, sister of Edward the Confessor; the Domesday Book records 29 tenancies in her manor. Later in the century it was rebuilt as a stone church and appears to have been at its height of splendour and patronage in the twelfth century, when it functioned as the church to the Archbishop’s London lodgings next door.

In 1377 the stone tower was built; it was repaired in 1834 – 35 but is otherwise intact. The body of the church was continually rebuilt and enriched over the centuries but, decisively, in 1851 – 2 the aisles and nave were rebuilt by Philip Charles Hardwick (1822 – 92), an architect prominent in the construction of banks and railway stations but not considered to be in the "first rank" of his generation; it was his father, Sir Philip Hardwick, who designed the Euston Arch. It is described by Museum of London Archaeology Service "as an almost complete rebuilding of the old body of the church". The most eye-catching survivals are four of eight corbels in the ceiling of the nave. These are a mix of medieval and Victorian construction.

One of the few twentieth-century interventions took place circa 1900 with the insertion of an immersion font, said to be one of only two examples in Anglican churches in England, and a baptistery at the base of the Tower

In the Second World War the stained glass was badly damaged by bombs, and in the 1950s the stained glass was replaced by either plain glass or panels by Francis Stephens (1921–2002), including a replica of the "Pedlar’s Window". The bombs also broke up the altar donated in 1888 by Sir Henry Doulton as a memorial to his wife; Doulton’s ceramic factory stood about 300 metres to the south.

In 1972 the church was made redundant in consequence of its dilapidation and gloom, and also because of changes in the population settlement of the parish: the area by the riverside had become derelict and under-populated, and the Vicar wanted a church closer to where the congregation lived. In 1969 Lambeth Council designated the area around Lambeth Palace as one of the borough’s first conservation areas.

Soon after the Church Commissioners obtained the necessary consents for demolition; the altar, bells, and pews were removed. In 1976 Rosemary Nicholson visited the site to see the tomb of John Tradescant and was shocked to discover the church boarded-up in readiness for its demolition. She established the Tradescant Trust, which was awarded a 99-year lease from the Diocese of Southwark, who continue to own the land. The Trust’s rescue and repair of the structure became one of the great architectural conservation causes of its time, and the church started its journey as a Museum. 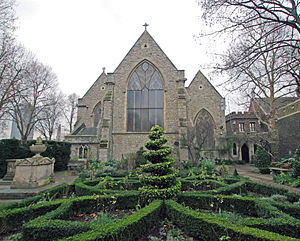 St Mary's as seen from the garden. The Tradescant and Bligh tombs (topped by a breadfruit in Coade stone) are to the left.

The church was a place of burial until the churchyard was closed in 1854, and the ground level of the site has risen in consequence. It is estimated that there are over 26,000 burials. The continued prestige of the site is reflected in the wills of many citizens who ordered tombs for themselves, particularly in the Chancel. The most significant is the chantry tomb on its north wall to Hugh Peyntwyn (died 1504), which is the earliest known example of a new design of wall monument associated with the royal workshops. Opposite is a monument of the same type to John Mompesson (died 1524): St Mary’s is unique in having two monuments of this type.

John Tradescant was buried inside the church in 1638, his son, also John, in 1662 and Elias Ashmole (From whom is said to be the first speculative freemason) in 1692. The family also has an altar tomb outside. Later burials inside the church includes the soprano Nancy Storace.

Burials outside in the churchyard include John Sealy of the Coade Stone Manufactory and Captain Bligh of The Bounty. It is exceptional for three Grade II* tombs (Tradescant, Sealy and Bligh) to be in a single small churchyard. Lambeth expanded quickly in the nineteenth century, and 15,900 burials are recorded in the two decades after 1790. The churchyard was enlarged in 1814 but was closed in 1854, at a time when other city churchyards were closed by Act of Parliament. 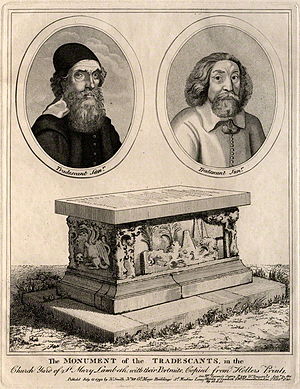 The tomb of the Tradescants

Five members of the Tradescant family are buried here: John Tradescant the elder; John Tradescant the younger with his two wives Jane and Hester, and his son, also called John, who died aged 19. The original 17th-century design for the tomb is in the Pepys Library, Cambridge, and an image of it may also be found at the National Portrait Gallery.

The present tomb is the third on the site of the Tradescant grave and replicates the original design. It was made by White of Vauxhall Bridge Road in 1853 with stone from Darnley Dale in Yorkshire.

On the east side of the tomb is carved the family arms, on the west side a skull and a seven-headed hydra, on the south side broken columns, Corinthian capitals, a pyramid and ruins, and on the north side shells, a crocodile, and a view of some Egyptian buildings.

The epitaph on the top of the tomb was written by Tradescant's friend, John Aubrey (spelling modernised):

Know, stranger, ere thou pass, beneath this stone
Lie John Tradescant, grandsire, father, son
The last dy'd in his spring, the other two,
Liv'd till they had travelled Art and Nature through,
As by their choice Collections may appear,
Of what is rare in land, in sea, in air,
Whilst they (as Homer's Iliad in a nut)
A world of wonders in one closet shut,
These famous Antiquarians that had been
Both Gardeners to the Rose and Lily Queen,
Transplanted now themselves, sleep here & when
Angels shall with their trumpets waken men,
And fire shall purge the world, these three shall rise
And change this Garden then for Paradise.

Local Lambeth legend states that if the tomb is danced around twelve times as Big Ben strikes midnight a ghost appears.[citation needed]