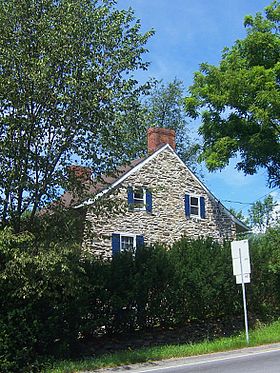 Gardnertown is a hamlet (and census-designated place) in Orange County, New York, United States. The population was 4,373 at the 2010 census. It is part of the Poughkeepsie–Newburgh–Middletown, NY Metropolitan Statistical Area as well as the larger New York–Newark–Bridgeport, NY-NJ-CT-PA Combined Statistical Area.

Gardnertown is located within the town of Newburgh, and is about 2 miles northwest of the city of Newburgh, a completely separate municipality. It takes its name from Silas Gardner, an early settler whose stone house, a Registered Historic Place, remains in use as a private residence on Route 300 just north of Route 52.

Gardnertown is the geographic center of the Town of Newburgh. Accordingly, most of the governmental buildings, including the Town Hall, the Police Department, and the Code Compliance (Old Town Hall) building, are all located in Gardnertown. The Town Justice Court is located about a mile and a half to the north.

Gardnertown is named after the Silas Gardner family, whose home is still standing and in private use. Gardnertown Road was cut in half to make way for the NYS Thruway in the mid-1950s (as was Orr Avenue in the southern part of the Town). Site of the gunpowder mill, on Powder Mill Road, which is the centerpiece of the Orange Mill Historic District, the only historic district within the Town. The ruins of the mill are now part of Algonquin Park, owned and maintained by the Orange County Department of Parks and Recreation. The current Gardnertown Methodist Church building was constructed at its current location, the intersection of Gardnertown Road and Union Avenue, in 1858, replacing an earlier church built in 1825. The fellowship hall was built in 1957.[1] The church is affiliated with Gardnertown Cemetery, one of the oldest cemeteries in the Town still in use, which is located both immediately east of the church, across Union Avenue, and south of the church, across Gardnertown Road. The Town of Newburgh American Legion Post 1420 is located on Union Avenue a short distance south of Gardnertown Methodist Church. Gardnertown Elementary School was located on Gardnertown Road. A new school was built on Plattekill Turnpike in the mid-1950s, where it remains today. The former schoolhouse then became Newburgh Town Hall. (Previously, the Town Hall was located in a building on Old South Plank Road, about a half a mile to the south. That building is no longer standing.) When the current Town Hall was constructed and opened next door in 1973 (at 1496 Route 300), the former schoolhouse became police headquarters. When the current police headquarters was built and opened next door in the other direction in 1989 (at 300 Gardnertown Road), it became an auxiliary Town Hall, housing the Code Compliance, Planning and Zoning Departments.[2]

There were 1,624 households out of which 37.7% had children under the age of 18 living with them, 58.8% were married couples living together, 11.1% had a female householder with no husband present, and 24.8% were non-families. 20.0% of all households were made up of individuals and 9.4% had someone living alone who was 65 years of age or older. The average household size was 2.79 and the average family size was 3.23.