From Infogalactic: the planetary knowledge core
Jump to: navigation, search
For the district, see Garmisch-Partenkirchen (district). 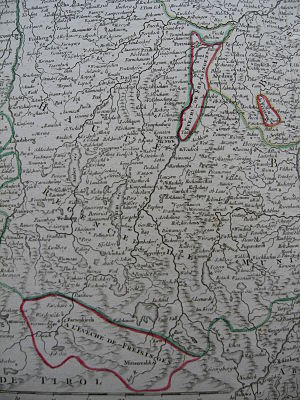 Garmisch (in the west) and Partenkirchen (in the east) were separate towns for many centuries, and still maintain quite separate identities.

Partenkirchen originated as the Roman town of Partanum on the trade route from Venice to Augsburg and is first mentioned in the year A.D. 15. Its main street, Ludwigsstrasse, follows the original Roman road.

Garmisch is first mentioned some 800 years later as Germaneskau ("German District"), suggesting that at some point a Teutonic tribe took up settlement in the western end of the valley.

During the late 13th century, the valley, as part of the County of Werdenfels, came under the rule of the prince-bishops of Freising and was to remain so until the mediatization of 1803. The area was governed by a prince-bishop's representative known as a Pfleger (caretaker or warden) from Werdenfels Castle situated on a crag north of Garmisch.

The discovery of America at the turn of the 16th century led to a boom in shipping and a sharp decline in overland trade, which plunged the region into a centuries-long economic depression. The valley floor was swampy and difficult to farm. Bears, wolves and lynxes were a constant threat to livestock. The population suffered from periodic epidemics, including several serious outbreaks of bubonic plague. Adverse fortunes from disease and crop failure occasionally led to a witch hunt. Most notable of these were the trials and executions of 1589–1596, in which 63 people — more than 10 percent of the population at the time — were burned at the stake or garroted.

Werdenfels Castle, where the accused were held, tried and executed, became an object of superstitious terror and was abandoned in the 17th century. It was largely torn down in the 1750s and its stones used to build the baroque Neue Kirche (New Church) on Marienplatz, which was completed in 1752. It replaced the nearby Gothic Alte Kirche (Old Church), parts of which predated Christianity and may originally have been a pagan temple. Used as a storehouse, armory and haybarn for many years, it has since been re-consecrated. Some of its medieval frescoes are still visible.

Garmisch and Partenkirchen remained separate until their respective mayors were forced by Adolf Hitler to combine the two market towns in 1935 in anticipation of the 1936 Winter Olympic games. Today, the united town is casually (but incorrectly) referred to as Garmisch, much to the dismay of Partenkirchen's residents. Most visitors will notice the slightly more modern feel of Garmisch while the fresco-filled, cobblestoned streets of Partenkirchen offer a glimpse into times past. Early mornings and late afternoons in pleasant weather often find local traffic stopped while the dairy cows are herded to and from the nearby mountain meadows.

During Word War II Garmisch-Partenkirchen was a major hospital center for the German military. After the war, it was used by the U.S. military as a recreation center for U.S. military men stationed in Europe and their families.

Garmisch-Partenkirchen leans towards an oceanic climate.[2] It has colder winters than the rest of Bavaria; due to its higher altitude it is very close to the winters associated with continental climates. It has a relatively wet and snowy climate with high precipitation year round. 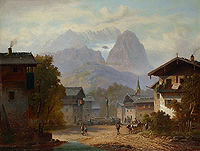 The town is served by the B 2 as a continuation of the A 95 motorway, which ends at Eschenlohe 16 km north of the town.

Garmisch-Partenkirchen station is on the Munich–Garmisch-Partenkirchen line and the Mittenwald Railway (Garmisch–Mittenwald–Innsbruck). It is the terminus of the Außerfern Railway to Reutte in Tirol / Kempten im Allgäu and the Bavarian Zugspitze Railway (with sections of rack railway) to the Zugspitze, the highest mountain in Germany. Regional services run every hour to Munich Central Station (München Hauptbahnhof) and Mittenwald and every two hours to Innsbruck Central Station (Innsbruck Hauptbahnhof) and Reutte. In addition there are special seasonal long-distance services, including ICEs, to Berlin, Hamburg, Dortmund, Bremen and Innsbruck.

There are several accessible high and low-level hiking trails from the town that have especially good views. 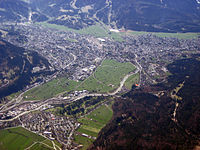 In 1936 it was the site of the Winter Olympic Games, the first to feature alpine skiing. A variety of Nordic and alpine World Cup ski races are held here, usually on the Kandahar Track outside town. Traditionally, a ski jumping contest is held in Garmisch-Partenkirchen on New Year's Day, as a part of the Four Hills Tournament (Vierschanzen-Tournee). The World Alpine Ski Championships were held in Garmisch in 1978 and 2011.

Garmisch-Partenkirchen is also a favoured holiday spot for skiing, snowboarding, and hiking, having some of the best skiing areas (Garmisch Classic and Zugspitze) in Germany.

Garmisch-Partenkirchen was a partner in the city of Munich's bid for the 2018 Winter Olympics but the IOC vote held on 6 July 2011 awarded the Games to Pyeongchang. The Winter Olympics were last held in the German-speaking Alps in 1976 in nearby Innsbruck, Austria.

The George C. Marshall European Center for Security Studies[4] is also located in Garmisch-Partenkirchen. The Marshall Center is an internationally funded and mostly U.S.-staffed learning and conference centre for governments from around the world, but primarily from the former Soviet Union and Eastern European countries. It was established in June 1993, replacing the U.S. Army Russian Institute. Near the Marshall Center is the American Armed Forces Recreation Centers (Edelweiss Lodge and Resort) in Garmisch that serves U.S. and NATO military and their families. A number of U.S. troops and civilians are stationed in the town to provide logistical support to the Marshall Center and Edelweiss Recreation Center. The German Centre for Pediatric and Adolescent Rheumatology, the largest specialized centre for the treatment of children and adolescents with rheumatic diseases in Europe, has also been located in Garmisch-Partenkirchen for over 50 years.

South of Partenkirchen is the Partnach Gorge,[5] where the Partnach river surges spectacularly through a narrow, 2-kilometre-long (1 mi) gap between high limestone cliffs. The Zugspitze (local name "Zugspitz") is south of Garmisch near the village of Grainau. The highest mountain in Germany, it actually straddles the border with Austria. Also overlooking Garmisch-Partenkirchen is Germany's fourth-highest mountain, the Leutasch Dreitorspitze ("Three-Gate Peak", a name derived from its triple summit).

The King's House on Schachen, a small castle built for Ludwig II of Bavaria, is also located in the mountains south of Garmisch-Partenkirchen. Its grounds contain the Alpengarten auf dem Schachen, an alpine botanical garden.